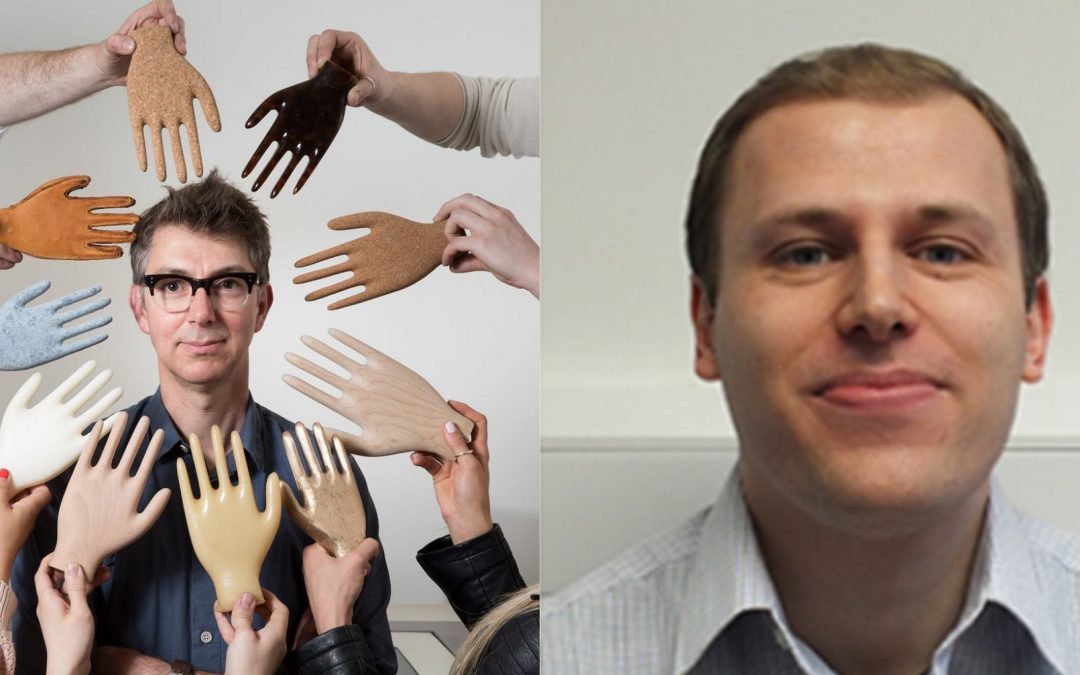 University of Dundee researchers have been praised by Stephen Fry after their efforts in communicating research to the public won them awards named after the University’s former rector.

The Stephen Fry Awards for Excellence in Public Engagement with Research celebrate the sharing of the world-class research carried out at Dundee with the wider public. They are given to the project and researcher that made the greatest contribution to public engagement in the past year.

The 2018 Public Engagement Project of the Year was won by Hands of X, a collaboration that designs made-to-order prosthetic hands in a range of materials and colours according to the wearers’ preference. The team included Prof Graham Pullin, Dr Andrew Cook and Eddie Small from the University, and Corinne Hutton founder of the Finding Your Feet charity.

Dr Daniel Cook, of the University’s English department, has been named Engaged Researcher of the Year in recognition the role he has played in bringing the works of Mary Shelley, H.G.Wells and Jonathan Swift to life for new audiences in Dundee as part of the national Being Human Festival.

The winners received their awards at the University’s annual Discovery Days event at the Dalhousie Building on Friday 12 January.

Stephen Fry, the comedian, actor, writer, broadcaster and activist who served two terms as Rector of the University, congratulated the winners in an audio recording that was played when they received their awards.

He said, “I couldn’t be more proud to lend my name to this award. I think it so crucial at this time when a great chasm seems to have opened up in our culture and in our society, between what is considered the elitism of those who are in education, who have received education, believe in education and those for whom education is a mark of some sort of snobbery.

“This false distinction is horrific but rather than just protesting against it, blazing with anger against it, the most important thing is to engage with the public and show them that research, truth, empiricism – all the values that a great university like Dundee represents – matter and that they involve everybody. The human race raises its game because of our ability to learn, and believe in learning and truth and in sharing truth with people.”

Hands of X explores radical material choices in prosthetic hands, and is anchored by two important values – that any activity relating to disabled people must involve them as participants, on equal terms, and that it should challenge a simplistic and polarised narrative around prosthetics. The prototype hands designed by the team are on display in the Cooper Hewitt Smithsonian Museum in New York until September 2018, with a touring exhibition planned to follow.

Dr Cook has helped established Dundee as a successful model of creative and critical interaction with the Humanities. His work led to Dundee becoming Scotland’s first hub for Being Human in 2016 and 2017. This was largely achieved as a result of Dr Cook’s eagerness to forge partnerships across different disciplines and with external partners to bring fresh perspectives to the study of literature.