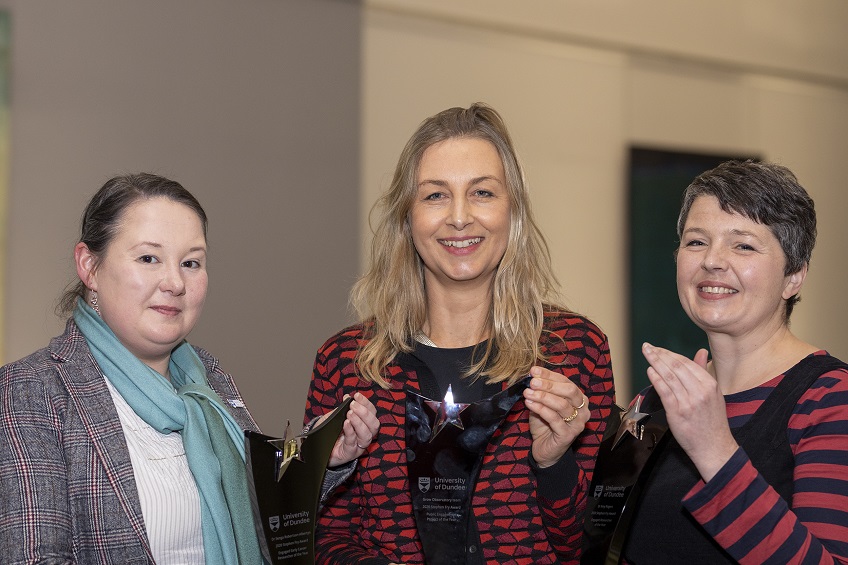 Stephen Fry has lavished praise on University of Dundee staff and students who have won awards, named after the University’s former rector, for their success in sharing their work with the public.

The Stephen Fry Awards for Excellence in Public Engagement celebrate the people and projects that engage with wider audiences, and the benefits they bring to society. The winners will receive their awards at the University’s annual Discovery Days event at the Dalhousie Building on Friday 10 January.

The 2020 Public Engagement Project of the Year was won by The GROW Observatory team, who empowered thousands of volunteers across Europe to tackle environmental issues by bringing about change in their local communities.

Dr Amy Rogers has been named Engaged Researcher of the Year in recognition of the range of projects she has established to involve members of the public in research at the University. In 2019, she set up the Public Involvement Group to review and critique research on medicines.

Dr Senga Robertson-Albertyn won the inaugural Early Career Researcher of the Year award for work carried out during the course of her PhD studies. She views public engagement as integral to her life sciences research and this is only the latest of the awards she has won for her work in communicating research to the public. 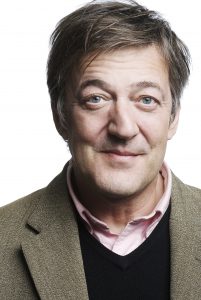 Stephen Fry, the comedian, actor, writer, broadcaster and activist who served two terms as Rector of the University, congratulated the winners in an audio recording that will be played when they receive their awards.

He said, “I congratulate the winners, and all who work within the University for helping to cement its relationship with the wider community and cement its reputation as one of the great universities of the world.

“Last year was another which reflected great glory on the university by the Tay. It saw us recognised as University of the Year for Student Experience in the Times/Sunday Times Good University Guide. This reflects outstanding scores for teaching quality and the wider student experience, including the facilities, pastoral care and other things that make such a difference to students.

“Dundee was also placed 20th in the world in the first Times Higher Education University Impact Rankings. These measure success in delivering the United Nations’ Sustainable Development Goals, which reflect all aspects of life around the world. The fact that Dundee has done so well and has been placed so highly, I think, speaks volumes for our outreach as well as what goes on in the campus.

“I’m so proud to be connected to the work that is done and to have my name unworthily flown as a banner. Thank you all very much. Lots and lots of love and congratulations to all.”

Click here to listen to the full audio recording from Stephen Fry.

Prof John Rowan, Vice-Principal (Research, Knowledge Exchange and Wider Impact) at the University, said, “The University of Dundee has set out an ambitious vision to become Scotland’s leading University within 25 years. And public engagement is a key strand of our founding mission to transform lives through the creation, sharing and application of knowledge.

“The Stephen Fry Awards are just one of the ways we reward and recognise our staff and students’ outstanding efforts in listening to and learning with individuals, communities and organisations. Congratulations to all winners and nominees.”

The GROW Observatory, led by Professor Mel Woods, helps citizens and communities increasingly concerned about the environment and climate change. The team has engaged thousands of volunteers across Europe to profile the continent’s soil moisture, a key indicator in extreme climate events. This work embraces communities living with increasingly extreme environmental issues to work together on key environmental challenges.

The tools developed by the team are gaining widespread use, with impacts including a 30-50% reduction in the amount of water used for irrigation by farmers in the Canary Islands.

Dr Rogers is a clinical research fellow whose interests include evidence-based prescribing in primary care, and policymaking. She is a passionate advocate for public engagement, with the Public Involvement Group’s most recent work focusing on how best to communicate with patients and practices to ensure participant satisfaction and optimal recruitment into clinical trials.

Dr Senga Robertson-Albertyn has already been named the Microbiology Society’s Engaged Researcher of the Year and received the Royal Society of Edinburgh’s Public Engagement Innovator’s Medal. One of the first projects she developed helped teach children and communities about the bacteria that live in our gut. In this ‘Microbe Motels’ project Senga’s new ways of engaging others were so successful that she and colleagues published the work in a peer-reviewed journal.