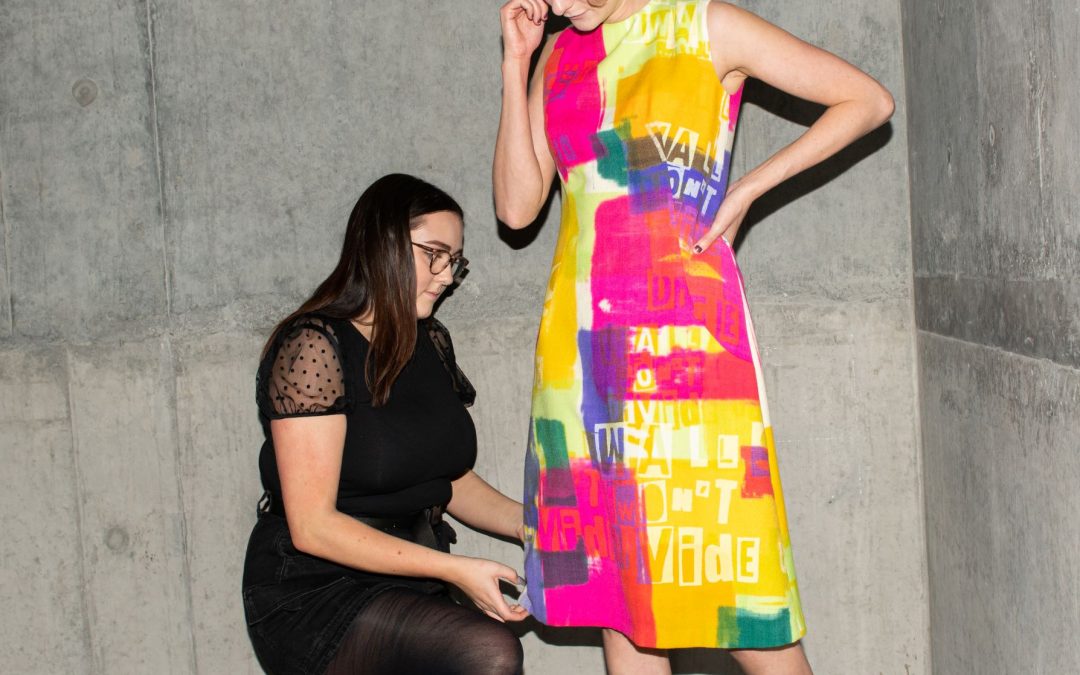 Jane Neave was selected as one of five students in her year group to create a design for V&A Dundee based on 1960s fashion designer Mary Quant and what she might do now if she were still working in fashion.

Originally from Edinburgh, Jane Neave is currently studying at DJCAD and has been working on a project with V&A Dundee for the upcoming Mary Quant exhibition. Like many students, Jane has often wondered if her work is good enough but, thanks to her tutors and the opportunity to work with V&A Dundee, her confidence has reached an all-time high.

Although art was Jane’s favourite subject at school and she was accepted by the University and offered a place at the art school, she suffered with ‘imposter syndrome’ in her first year. The course is broad and challenging, as is living away from home for the first time, so it’s not an uncommon feeling amongst new university students.

Jane talks with pride about one of her first-year tutors who made the effort to continue to visit her throughout her studies, offering praise on a previous assignment, and encouraging her ability and reassuring Jane that she was entirely on the right track.

Jane said, “I remember him being straight to the point with me, but also asking me if I was alright and regularly seeing how I was. He wasn’t my tutor as much in second year but he still came to see me and tell me I was doing really well. He said that all the tutors read my essay and they thought it was really good. He would always try to get me to push myself and see my own potential, and that built up my confidence.

“In my first year I failed a couple of modules and I wasn’t sure if I should go back after the Christmas holidays. I considered giving up.”

Jane did return to DJCAD to embark on her second year. She continued, “It was only when I started focusing on textiles that I built up my confidence again. I was learning a completely new thing and the design process is quite straightforward – I work well with guidance and direction.”

The nature of the V&A Dundee project helps explain why Jane enjoyed it so much, and her experiences influenced her approach. The students were given a brief to explore Mary Quant’s legacy as a fashion designer and think about what Quant would do were she still working and designing now, and design something based on their research and findings. Jane’s thoughts instantly turned towards gang culture and xenophobia, subjects she feels strongly about.

She said, “I love that they gave us a timeline. I responded well to that because there was so much structure and a clear brief on what was expected of us, but with the openness to interpret Quant for ourselves and develop our project based on our own ideas.

“I really considered how Mary Quant looked, how she wore suits even though it wasn’t really done then. She designed with women, and what women wanted, in mind. Then I thought about this in relation to designing my textile and dress.

“I’ve always been against violence and discrimination of any kind. I don’t understand the mind set behind them so I thought it would be interesting to explore them in this context.”

Jane says she is thrilled to have her work selected for the Quant exhibition, and is excited to discover what her final year at DJCAD will bring following the success of her third year.