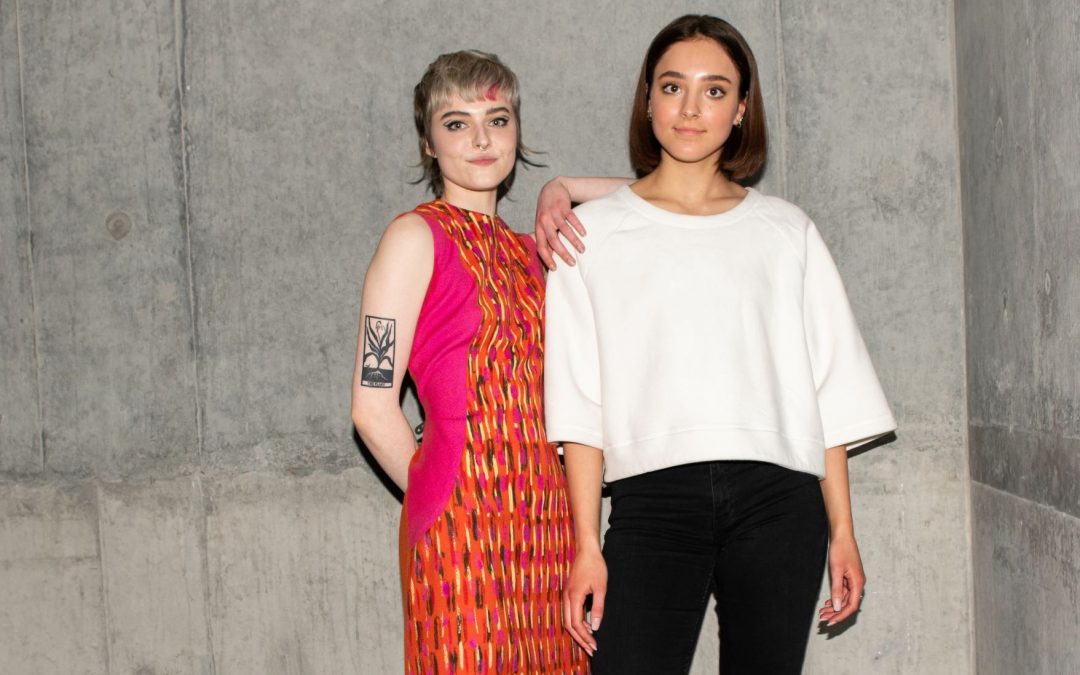 Lucy Carrie was selected as one of five students in her year group to create a design for V&A Dundee based on 1960s fashion designer Mary Quant and what she might do now if she were still working in fashion.

Before Lucy Carrie left Peebles to come to Dundee, she was working in the hospitality industry and had little idea of what she wanted to with her future. Lucy initially had no intention of studying at university, but her love for painting soon saw her explore her options. Now in her third year at DJCAD, she is following in her family members’ creative footsteps.

In school, Lucy admits she struggled academically but excelled in art, skipping classes to head to the art studio and painting in her spare time. With a family full of creative individuals, it’s clear to see where her artistic passion has come from.

“My grandma went to art college to do fine art, that’s where she met my grandfather,” said Lucy. “My mum’s an interior designer and also paints on the side, and my dad used to draw too. We have illustrators in the family, and photographers. There’s such a mix of creative individuals.

“In school we were told ‘you need to study law, you need to go to med school’. I was told that I couldn’t get a job in art, that there was no career in it. So, I kind of wanted to prove a few people wrong.”

Deciding to put together a portfolio and apply to only one place, Dundee, Lucy was accepted into DJCAD and hasn’t looked back since, continuing to explore and build her creative talent.

“I was quite worried when I first started at DJCAD but there was a lot of support, and I was able to just design and create. You get to make such beautiful things with such bright, vibrant colours and you take an inspiration from anywhere, and then I heard about Mary Quant while I was studying textiles.”

Lucy is one of five students in her year group chosen to create a design for the upcoming Mary Quant exhibition at V&A Dundee, based on the 1960s fashion designer and looking at what she might do now if she were still working in fashion. Lucy said she was drawn to Quant’s unique and colourful designs.

“I think she was such an icon. She changed fashion and changed the way women could dress. I had no idea she first designed the PVC stuff, but that was exciting to me because it recently came back in fashion – I bought a pair of PVC black pants last year! But, in the end, it was the bright colours she used that really spoke to me.

“I was so shocked that I got picked! It was uplifting and it’s been really motivating, I feel really lucky, actually. It’s also exciting to know that you’re designing for someone else.”

Looking at the future and possible careers, Lucy said she would like to start designing for others before potentially going on to start her own business. Not only will she be joining her long list of family members in the creative industry, she will certainly prove wrong the people who said a career in art is not achievable.