A look back at 1960s student politics 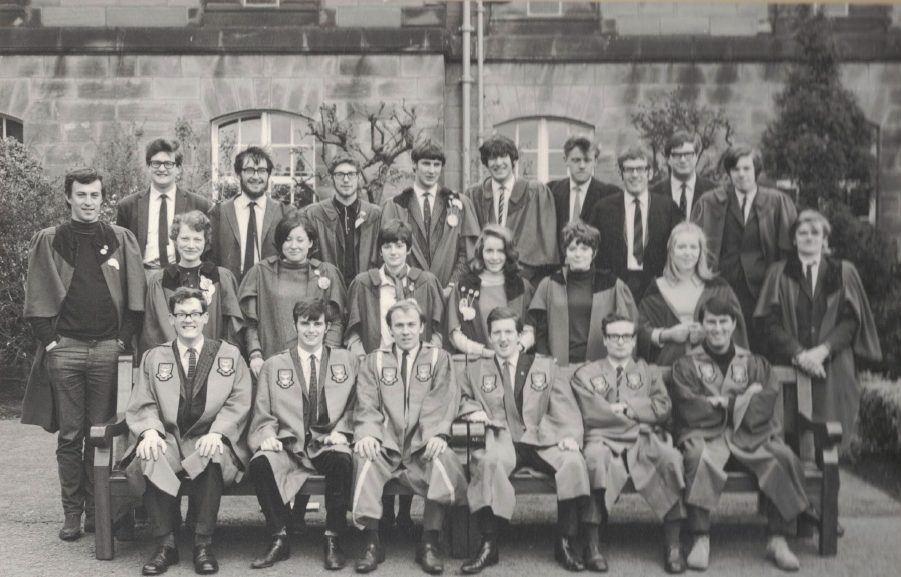 During our 50th year we’ve been speaking to many of our alumni from the past. One who got in contact with us was the very first president of the University of Dundee Student Representative Council, Pete Thomas. He looks back on his time at University in 1967.

“I attended the University of Dundee from 1st October 1965. I was a member of the first cohort of postgraduate students studying on the MSc course in Numerical Analysis and Programming in the Department of Mathematics. There were then 14 postgraduate students in the department with offices in the recently acquired tenement block at 23 Perth Road (which we knew as ‘The Bothy’).

I had little interest in student politics when I first came to Dundee, being more interested in football and cricket, but one of my flatmates and fellow postgraduate student in Mathematics, Ian Roebuck, became involved in the Student’s Representative Council. Through him I met several members of the Council. Towards the end of my first year, in about May 1966, a group of (mildly) left-wing students decided it would be a good idea to attempt a ‘coup’ and take over the SRC placing an advert to this effect in the student paper Annasach. The advert suggested that students should elect a totally new and vibrant SRC in preparation for the forthcoming establishment of the independent University of Dundee. They felt that if they could persuade students to vote for ten like-minded people, a sea change in student politics could be achieved. They had 9 names and I was persuaded to become the 10th. Subsequently, all ten names were successfully elected with Geoff Hill as President. Suddenly, I was involved in student politics at the time of the establishment of the new University of Dundee.

During my first year on the SRC I was convenor of the Book Exchange and Stationary Store. But around Easter 1967 a member of the Executive Committee of the SRC resigned and I was elected in her place. I was then involved in the celebrations around the formation of the new University being formally presented to the new Chancellor, Queen Elizabeth, The Queen Mother. 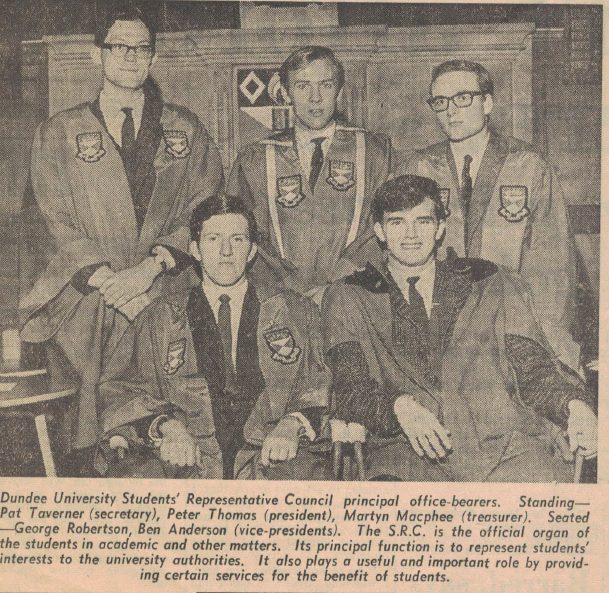 Later, in the final term of the 1967 academic year, the elections for the next SRC took place and I was elected President. I therefore became the first president of the University of Dundee Student Representative Council. I was joined on the SRC by George Robertson (politician, later to become Defence Secretary, Secretary General of NATO and Baron Robertson of Port Ellen),  Ben Anderson (later President of the SRC), Pat Taverner and Martyn Macphee. 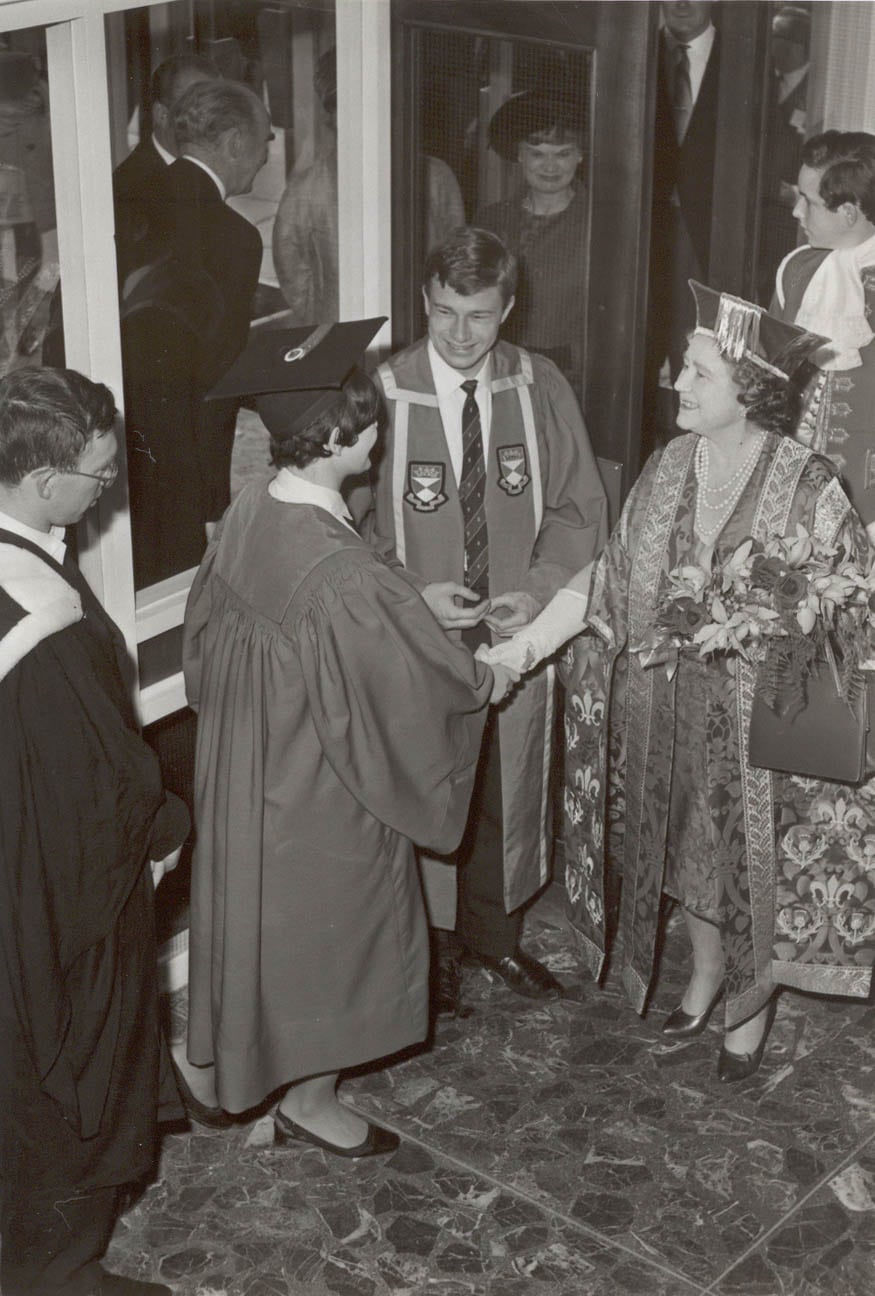 During my tenure as President of the SRC I attended meetings of the newly established Senate-Student and Court-Student committees. One of the successes of the Student-Court Committee was the agreement that the Presidents of the SRC and Students Union should have a ‘Lay Year’ (now known as a sabbatical). That is, their studies would be suspended and the University would pay them a maintenance grant. This would be put into effect for the presidents following me. At the meeting at which this was agreed, the Principal and Vice-Chancellor, James Drever, remarked that he was sorry that I wouldn’t be able to take advantage of something I’d worked hard to achieve.

Following my year as president of the SRC, I stepped down from student politics to concentrate on my academic studies. I was awarded an MSc in Numerical Analysis in 1968. Having matriculated both in the University of St Andrews and the University of Dundee I was given the choice of a St Andrew’s or Dundee degree. I chose Dundee! Later that year I was appointed to an academic post in the Department of Mathematics at Dundee, as NCR Research Fellow in Computing, and was awarded a PhD in Computing in 1972.

I left Dundee in 1972 for a lecturing post at The Open University where I subsequently became Dean of the Faculty of Mathematics and Computing where I was, at last, able to use my SRC training.

Twenty years later, in 1988, my younger daughter, Cath Thomas, joined the University as an undergraduate. In 1992 she became Senior Vice-President of DUSA. She graduated in 1992 with a BSc in Computing.

We attended the 25th anniversary celebrations in 1992. In her role as SVP she was given a sabbatical, which reduced the level of parental financial support. So, despite the Principal’s observation mentioned earlier, I did indeed benefit from my labours as the first President of the Student’s Representative Council of the University of Dundee.” 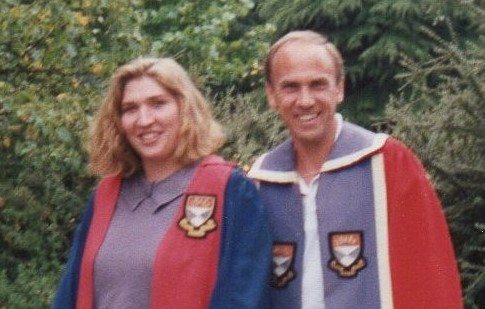