A University to be proud of 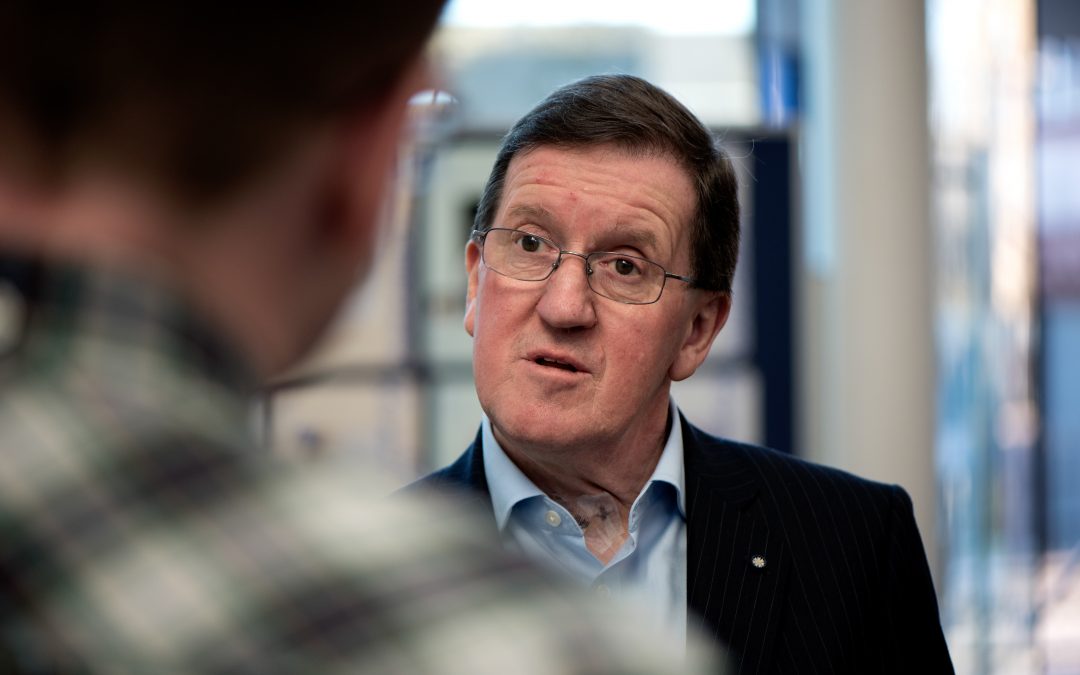 History records George Robertson becoming Member of Parliament for Hamilton in May 1978 but the fact he tasted electoral success in Dundee more than a decade earlier is less well-known.

The future Secretary General of NATO and Right Honourable Lord Robertson of Port Ellen matriculated at Queen’s College, Dundee in 1963 in order to “get away from home and spare my father embarrassment”. He was elected to the Student Representative Council during his first year in Dundee having already made a name for himself as a precocious activist in his hometown of Dunoon. This reputation only grew over the next four years, laying the foundations for the stellar political career that followed.

When Lord Robertson arrived in Dundee, Queen’s was already on the verge of becoming a university in its own right. For students such as Lord Robertson who were due to receive their degrees during the University’s first-ever graduation ceremony, this meant deciding where their loyalties lay – Dundee or St Andrews.

“Those of us who started off as St Andrews students were given the option to graduate from either there or Dundee,” he explained. “There were several of us who felt strongly that the new institution must be supported and we ran a campaign encouraging people to be patriotic by taking a Dundee degree but others felt differently. There was an element of snobbery, with people thinking a St Andrews degree afforded more prestige.”

Lord Robertson wrote a weekly column in the University’s ‘Annasach’ newspaper, from which he fired broadsides at a number of national and local targets. Those who opted to take the option of a St Andrews degree were among the subjects of his ire.

In an edition of 20th October 1967, he hit out saying their decision amounted to a vote of no confidence in the new institution. “I think we have a university to be proud of,” he railed. “We have taken away St Andrews’ best faculties; we will in the near future have the best equipped teaching hospital in Britain, and probably the best Dental School…If people can be so short-sighted as to kick the chances of expansion in the teeth, then I think they are not worthy of the education they have received here.”

“I have quite a collection of old copies of Annasach because my mother kept them and it makes me cringe at times,” Lord Robertson admitted. “One of my articles was ranting about old men running the word. Now I’m 71 and I think, ‘hang on a minute’! As long as I kept supplying them they kept printing them. Week after week I was having rants about rents and the warden at West Park and other things. It was pretty irresponsible stuff in its own way but that was the way of student journalism in those days.”

The mid- to late-1960s marked the high watermark of student radicalism and the young George Robertson was heavily involved in on-campus demonstrations. He was one of a number of Dundee students to invade the pitch during a rugby match at St Andrews involving a team from the Orange Free State to protest against apartheid. He also organised a 24-hour work-in by students in the library in opposition to proposed cuts to student grants. The latter incident saw University Principal James Drever teach the rebels a lesson in how to manage opponents.

“Speeches were made and there was a great sense of fun,” he remembered. “After a few hours this ebbed away. Principal Drever came in to see us about 3 in the morning. We were ready to fight back against his complaints about us keeping staff up all night and the disruption we were causing. Instead he looked at students quietly sitting at desks and working away. ‘Well, this is wonderful, Mr Robertson,’ he said ‘Maybe you could organise this every Wednesday night.’ He left us feeling about two inches tall.”

Dundee itself was a bit of a hotbed of politics in those days and I became involved in big campaigns through the Labour Party that wouldn’t have been possible if I had gone to Glasgow or Edinburgh.

Lord Robertson was re-elected by the people of Hamilton five times and served as Chairman of the Labour Party in Scotland and as Shadow Secretary of State for Scotland. He was appointed Defence Secretary when Labour came to power in 1997 and became Secretary General of NATO two years later.

His time in Dundee had seen Lord Robertson become heavily involved in local politics as well as those relating to campus life. He worked alongside “very big, controversial personalities” in the local Labour Party and believes that his choice of university provided him with a solid grounding in politics.

“I did very little academic work during my time at University,” he admits. “Dundee itself was a bit of a hotbed of politics in those days and I became involved in big campaigns through the Labour Party that wouldn’t have been possible if I had gone to Glasgow or Edinburgh.

“I chose Dundee because I needed to get away from home. Dunoon was a small place and my father was a policeman with the same name as me. I was demonstrating against American submarines in Scotland and other things that were causing trouble for him. I had struggled at school but here I just sank into system and enjoyed it thoroughly. The social scene was pretty vibrant with lot of parties taking place. I made lots of friends and really just had an amazing four years. My wife worked in the Economics department and we met when I worked here after graduating.”

Today’s students are very different to those of Lord Robertson’s vintage and the decline of campus radicalism is often bemoaned. How does the former student firebrand view the class of 2017?

“That was a moment of time when students were in the vanguard,” he remembers. “Brian Wilson, Alex Neil, Malcolm Bruce, Lynda Clark and Chris Chope, who all went on to politics, were here around then. There was lots of activity everywhere. Things are more competitive now and students are more focused on careers but there is still a lot for them to get angry about. And I hope they do.” 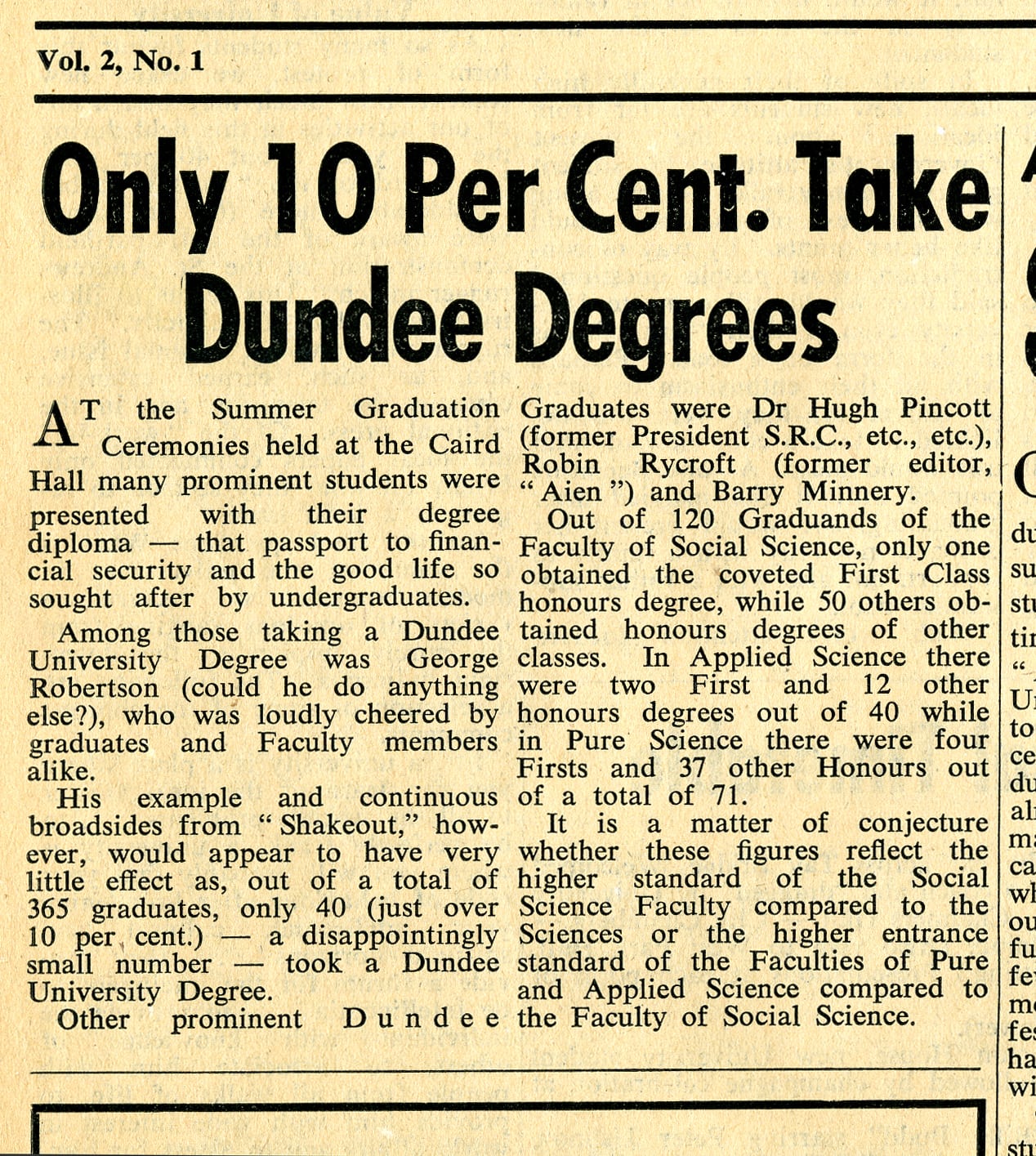