Celebrating enterprise with the best in Tayside

On a dark Saturday night at the end of October, almost 700 people gathered in a huge waterfront marquee in Dundee to celebrate the best of business across Angus, Dundee, Fife and Perth. 23 separate awards were handed out in 2017’s Courier Business Awards, and we were delighted to be able to join in on the festivities.

Research and Innovation Services were proud to sponsor the Enterprise in Education Award, recognising business innovation that has stemmed from university research. The three finalists in the category were all spinout companies from the University – MyWay Digital Health, STAR-Dundee, and Whole Life Consultants. Thankfully, deciding on the winner was down to The Courier’s expert panel! But Diane Taylor, Director of RIS, had the important job of opening the glittery envelope on the night. She presented the award to MyWay Digital Health, one of our more recent spinouts who are pioneering a new online management platform for people with diabetes (My Diabetes My Way). Worthy winners, and with another trophy in their cabinet, founder Dr Debbie Wake (School of Medicine) said that “2017 has been a remarkable year”! 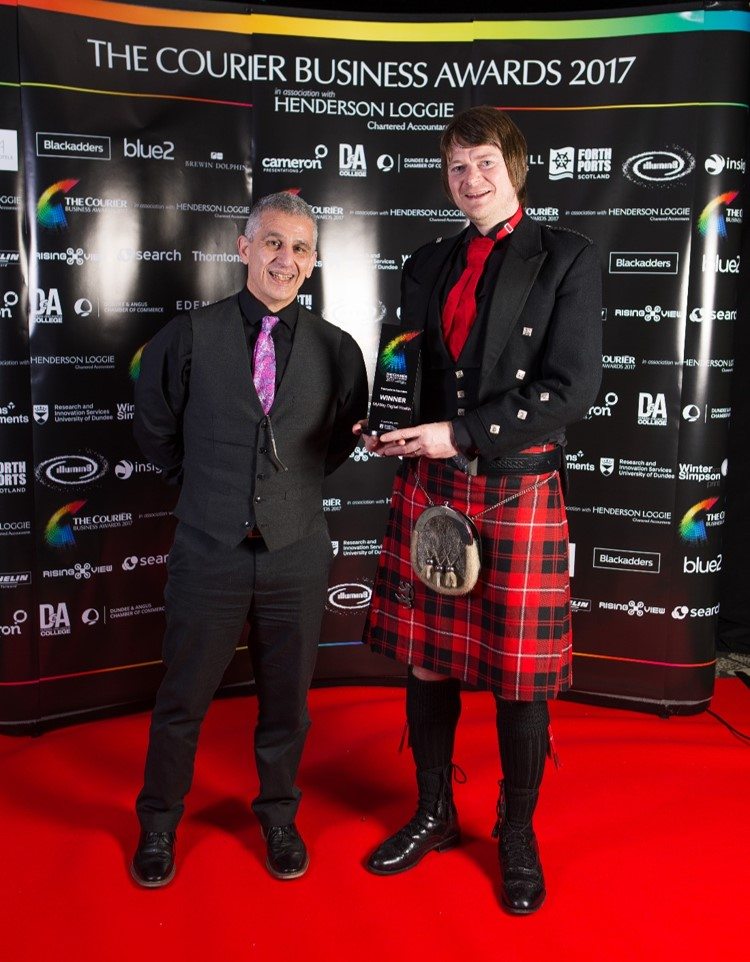 Two more of the University’s spinouts also picked up awards: STAR-Dundee, an aerospace engineering company formed by Prof Steve Parkes (School of Science & Engineering), won Design & Innovation Business of the Year, while Exscientia, a company pioneering AI-driven drug discovery and design formed by Prof Andrew Hopkins (School of Life Sciences) won Science & Technology Business of the Year. Again, these two companies have had an exceptional year so far, so it’s no surprise to see them as winners here. STAR-Dundee have recently announced their move to employee ownership, securing their future here in Dundee, and earlier in 2017 Exscientia established a number of lucrative partnerships with global pharmaceutical companies including Sanofi, GSK and Evotec. 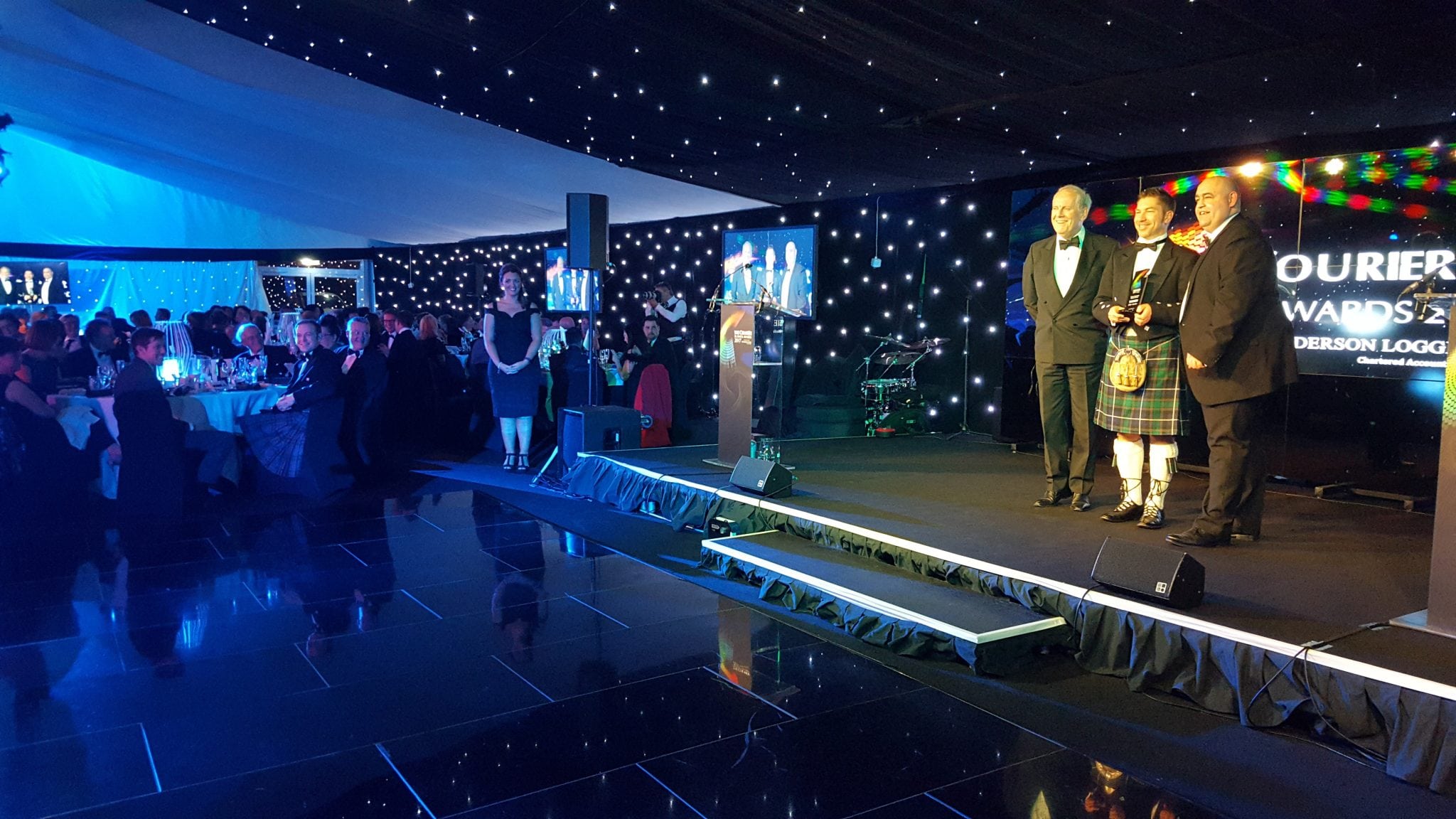 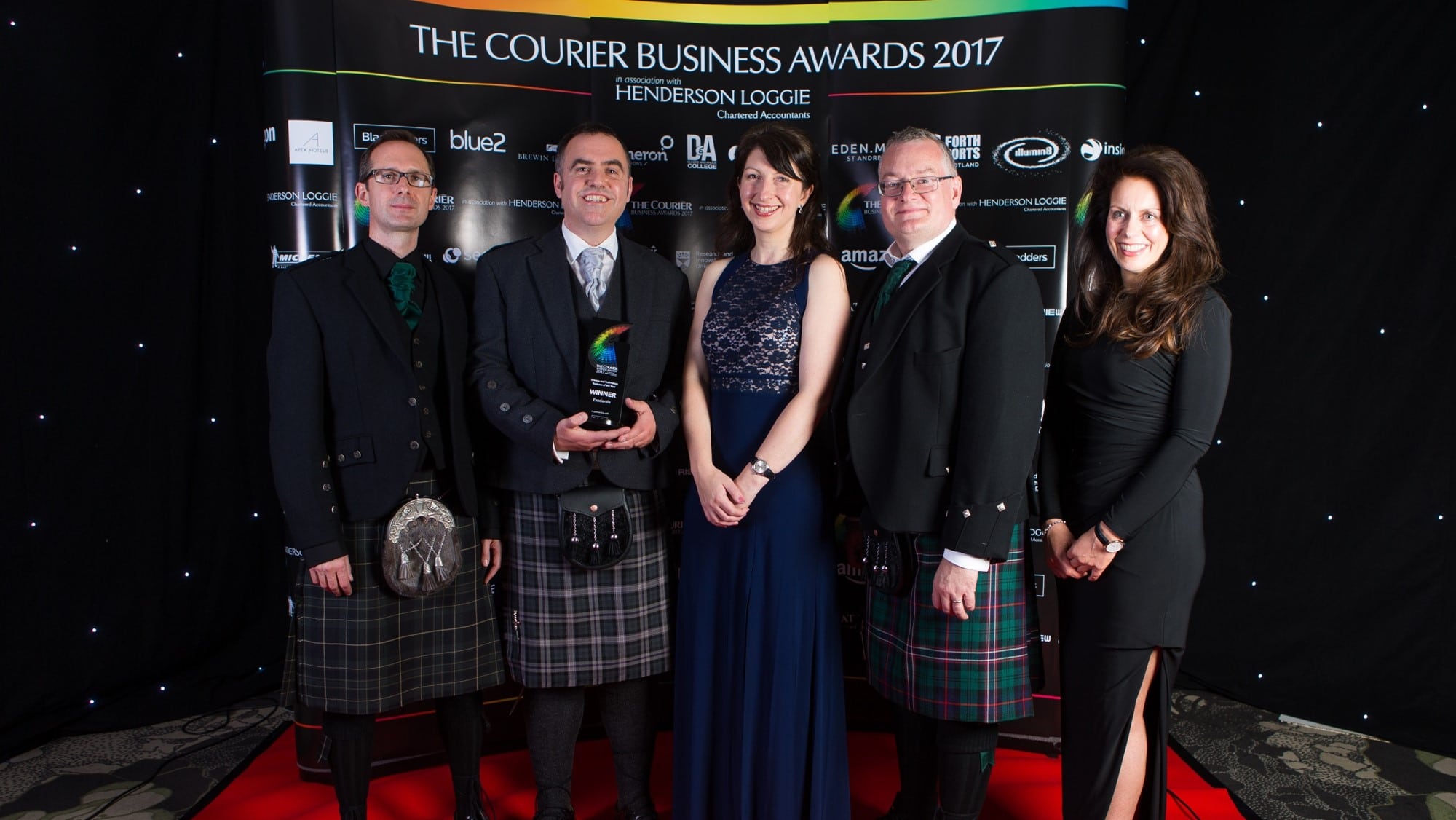 It wasn’t just our spinouts receiving the accolades at the Courier Business Awards, but our former students too. For example, Architecture graduate Jon Frullani and his firm Jon Frullani Architect won Growth Business of the Year, while Computing graduate Chris van der Kuyl took the biggest prize of the night; the Principal appeared via VT to introduce the Outstanding Contribution Award, and the packed marquee gave Chris a standing ovation. His game development studio, 4J Studios, is behind the console editions of the internationally popular game Minecraft, and he is a huge supporter of innovation and enterprise in Dundee and across Scotland, being the founding Chairman of Entrepreneurial Scotland. In his passionate acceptance speech, Chris detailed why he chooses to work in Dundee rather than Silicon Valley, citing Dundee’s “unbelievable spirit”, with a special mention for the talent coming out of our universities.

This is the fifth year of the Courier Business Awards, and it is growing year on year. It’s inspiring to see the strength and diversity of the businesses across the Tayside region, and it’s fantastic to see how our outstanding University community is impacting on these successes. 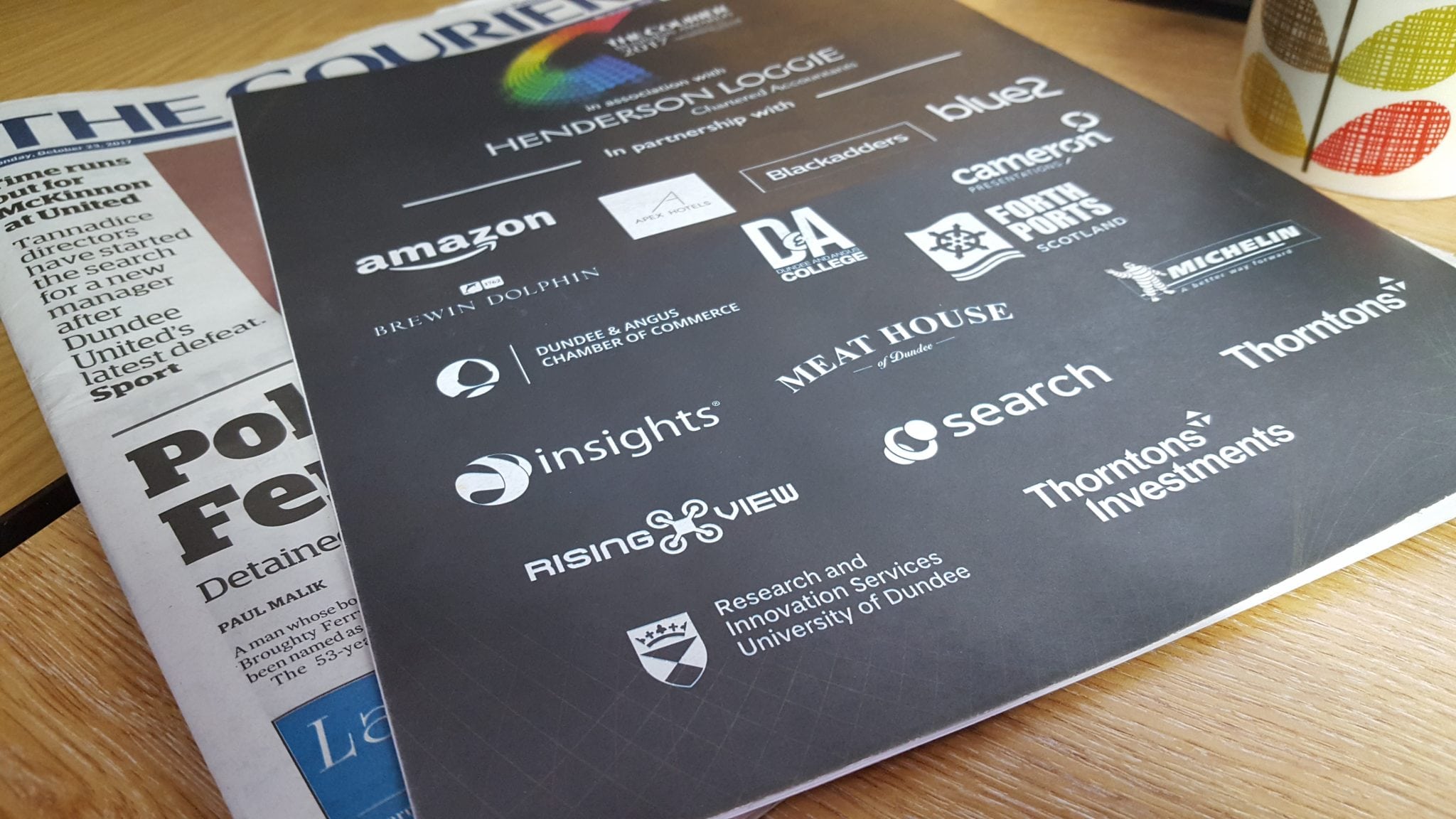 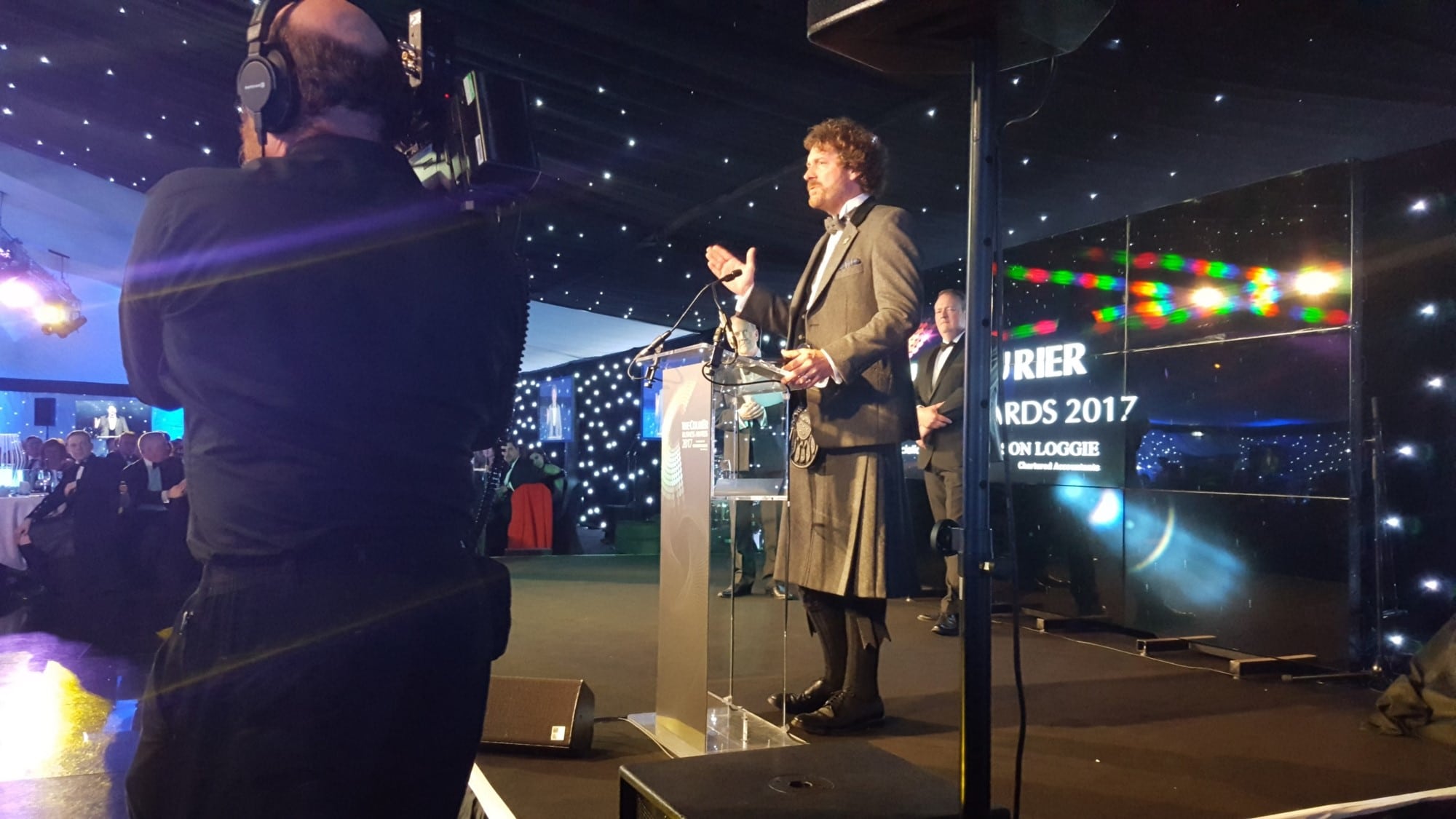 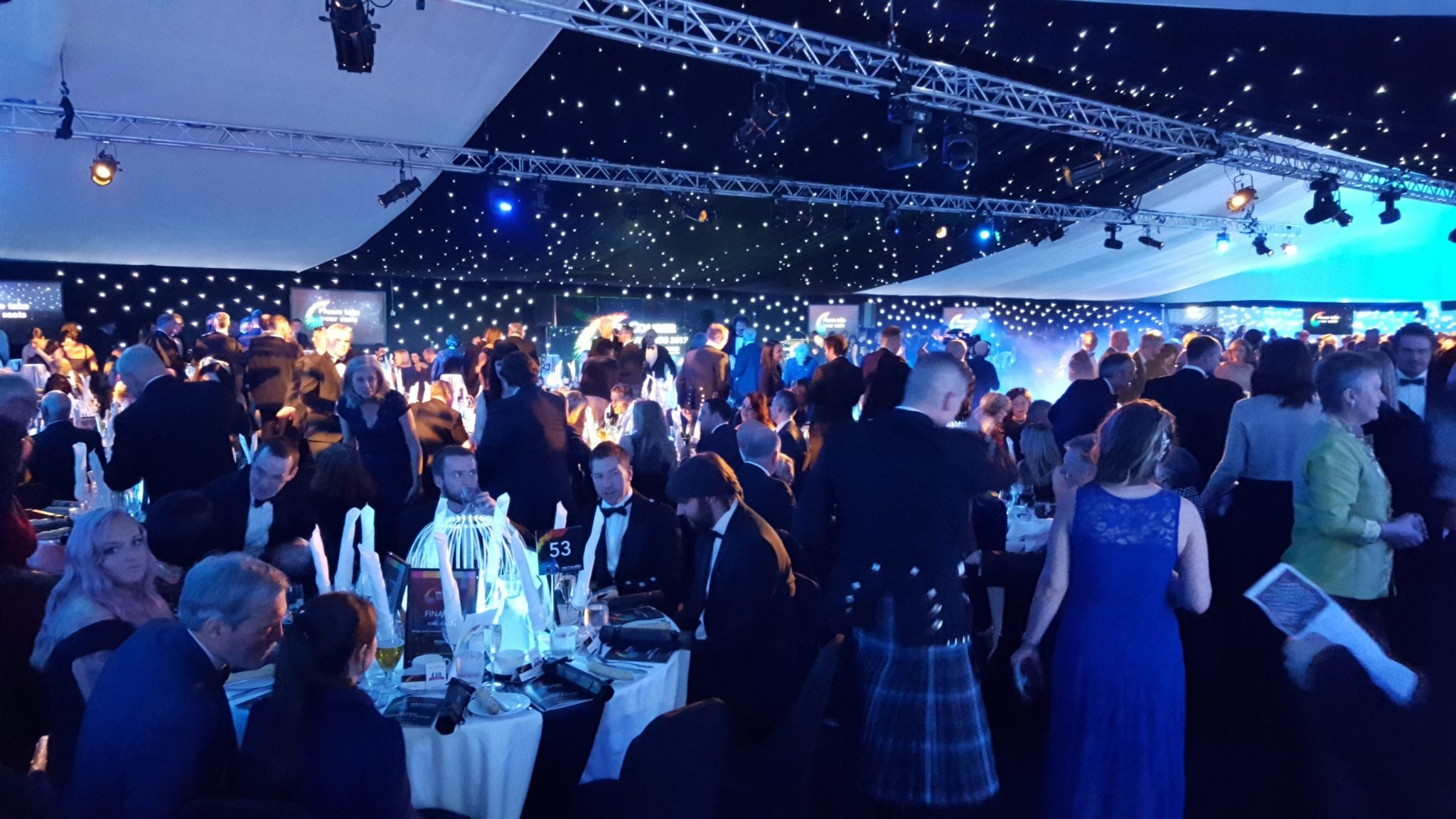 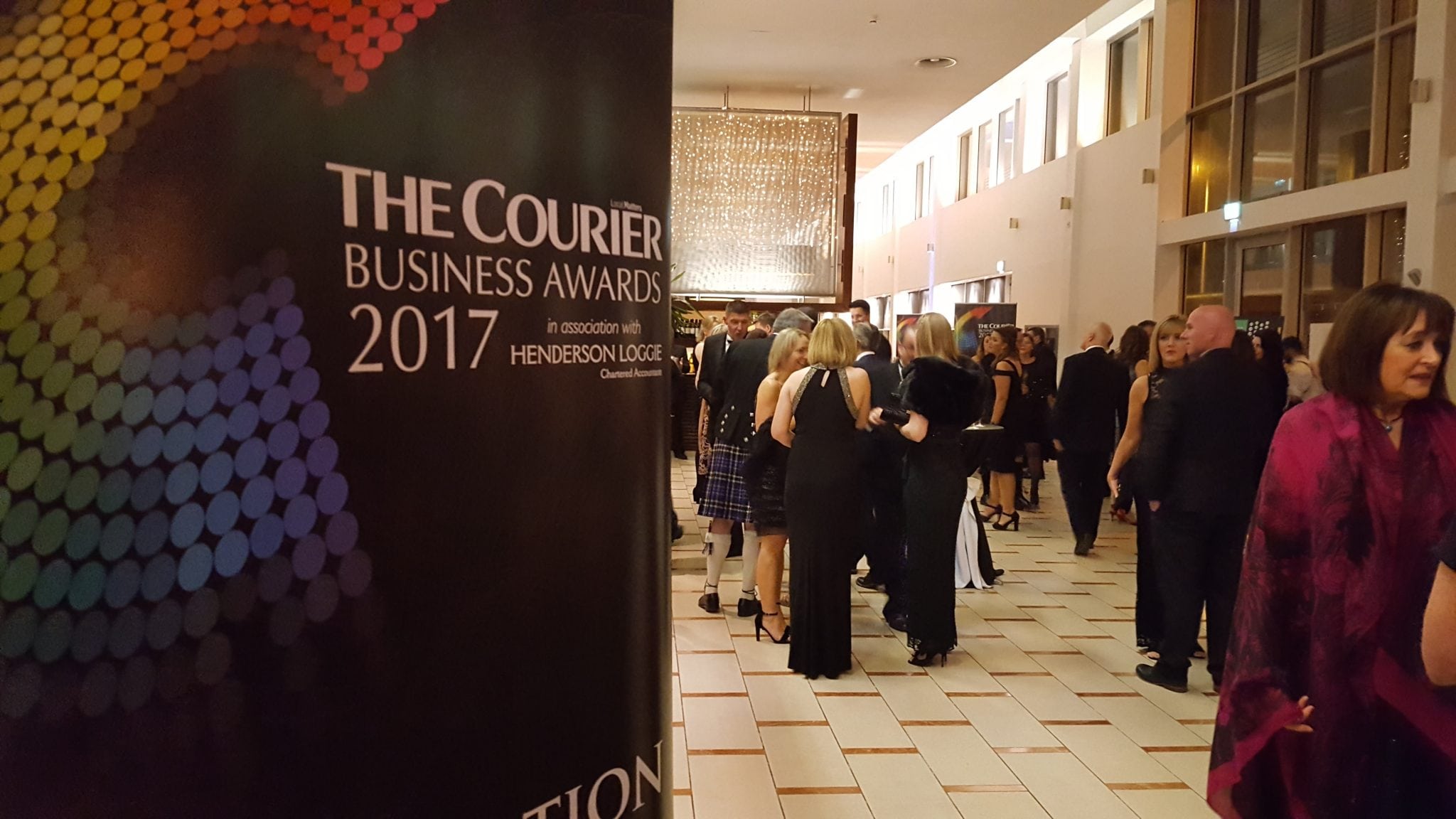 Research and Innovation Services (RIS) provides professional services to support our extensive research activities and to promote our engagement with industry and other organisations. RIS supports knowledge exchange through licensing, consultancy and collaborative R&D projects, and we help identify, protect, manage and exploit the University’s intellectual property (IP).

Find out more about Research and Innovation Services

The Centre of Entrepreneurship (CoE) at the University can offer tailored business support to students, staff members, alumni or the general public, helping you turn your idea into a business opportunity.

Find out more about Centre of Entrepreneurship