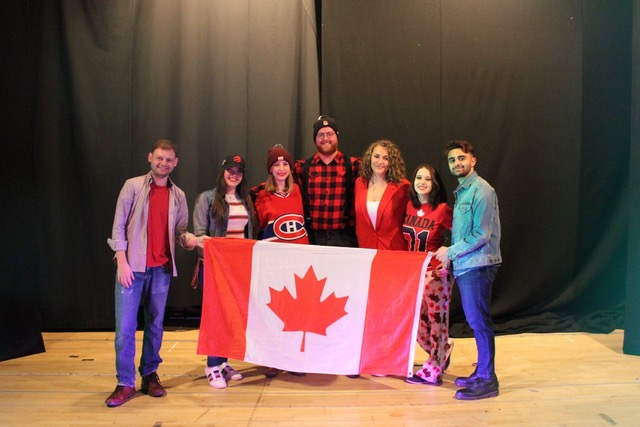 Happy Canada Day! July 1st commemorates the joining of Canada’s original three provinces (Nova Scotia, New Brunswick and the Canada province, which is now Ontario and Quebec) as one nation in 1867. Canadians across the world usually celebrate the day with parades, barbecues, fireworks displays, and concerts, and while this might not be possible this year, we know our Canadian students will be celebrating in their own way.

To celebrate the day, we spoke with some of the University’s Canadian Society to find out more about the Society and Canada! 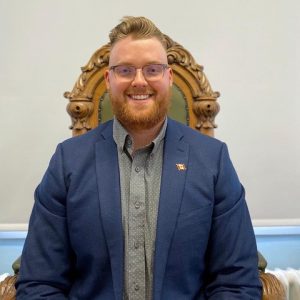 Alex St. John is the founder and President of the Society and is originally from Ottawa, Ontario, Canada. Alex is studying an MSc by Research in the School of Medicine and is currently still in Dundee.

Tell us a bit about the Canadian Society.  We are a fairly new society that want to share Canadian traditions and activities with the students of Dundee. There are so many fun and interesting things about Canada and I’m sure almost everyone can name at least one. We welcome every student, no matter your affiliation with Canada to join us for any of our events and see if you’d like to join along!

Why did you join? I founded the society back in November, and it’s been growing ever since!

How would you encourage others to join? I think our social media accounts give a nice quick look into how we run our events, and how much fun we have as a group!

place in Canada? The Rockies within the Western Provinces (used to live near them as a child).
thing about Canada? The general inclusivity that you feel wherever you are; many Canadians enjoy celebrating and including all cultures, races, and religions.
Canadian TV show? Trailer Park Boys (Bubbles is my hero!)
Canadian dish? Tourtière, it’s a Québécois minced meat pie usually made with pork and potatoes.
Canadian sweet/candy? Coffee Crisp

Do you have any fun facts about Canada? The nation’s capital, Ottawa, is the second coldest capital in the world behind Moscow.

Something about Canada that more people should know? The country is much bigger than most people imagine, there are 6 different time zones.

A Canadian that should be celebrated, and why? Sir Frederick Banting, he (along with Charles Best) was one of the first to extract insulin from the pancreas for treatment of diabetes. He’s also the youngest person (32) to have received the Nobel Prize in Physiology/Medicine for his discovery. 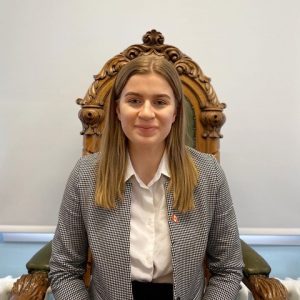 Amelia Carrothers is the Society’s Social Media Officer and is originally from Prescott, Ontario, Canada. Amelia is studying Accelerated English/NI Law at the University and is currently still in Dundee.

Why did you join the society? I helped found the society. I was walking around the society fair last year and found that I could not find one where I felt I belonged. I wanted to join because I thought this society could act as a home away from home. So far it has acted as such and I have made friends for life. I am very happy with my decision thus far to join and help found the society.

How would you encourage others to join? I would suggest they look at our social media accounts and come out for a welcome event! I am sure anyone would have fun, it doesn’t matter if you’re from Canada or not, there is some fun for everyone.

place in Canada? Toronto, there is always something going on, it is impossible to be bored.
thing about Canada? The people, the stereotype is real people are genuinely nice.
Canadian TV show? Corner Gas.
Canadian dish? Beaver Tails (Fried bread dough with sugar)
Canadian sweet/candy? Crunch, a chocolate bar with crispy rice.

Do you have any fun facts about Canada? We are the exclusive home to reindeer.

Something about Canada that more people should know? Do not come to Canada in the winter. COLD…

A Canadian that should be celebrated, and why? Lee Maracle. She was my professor while I was at the University of Toronto, she had a different approach to teaching that I had not experienced. She cared how we felt whilst learning, and I never had that interactive experience before. More than that she is a Canadian poet and Sto:lo author. Additionally, she should be celebrated because she often speaks out against Canada for their treatment to Indigenous peoples highlighting issues pertaining to Indigenous women. 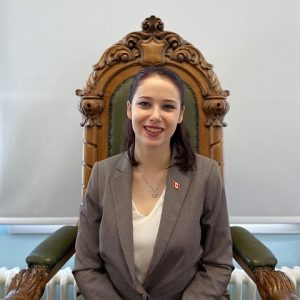 Cassidy Kersch is the Society’s Secretary and is originally from Vancover, British Columbia. Cassidy studies Accelerated English LLB/Law and is back in Vancouver for the summer.

Why did you join the Society? One of my friends, Alex (the current President) had the great idea to come up with a Canadian Society and once he talked to me and a few other Canadians about it, I was so excited!  Living away from home can be difficult, but being surrounded by my fellow Canadians helps me share details about my country to other students and also gives me a group to spend Canadian-based holidays with.

How would you encourage others to join? I would strongly recommend for anyone who is interested to check out one of our events.  While we’re not quite sure what we will be able to plan with the ongoing pandemic, we will make sure that it is a good time and that everyone feels welcomed!

place in Canada?   As a girl born and raised in British Columbia, I would have to say that my favourite place is Whistler, BC.  Even though I don’t know how to ski or snowboard, there’s something so special about getting to experience this little winter wonderland.
thing about Canada? Canada is extremely beautiful.  We are very focused on nature and while I know I’m biased, I think it is one of the most beautiful countries in the entire world.
Canadian TV show? Many people don’t know this, but Canada actually has a huge selection of animated TV series!  Some of these shows like Arthur, Babar, and Caillou were big parts of my childhood.
Canadian dish? I know it’s stereotypical, but my favourite Canadian dish would have to be poutine.  There’s just something so good about fries, gravy, and melted cheese!
Canadian sweet/candy? My favourite Canadian candy (although available in Scotland too!) would have to be Malteasers and Smarties.  They’re both just so yummy!

Do you have any fun facts about Canada? As a law student, I feel like it is only fair that my fun fact is a crazy law in Canada.  Did you know that it is illegal to challenge someone to a duel and/or to accept a duel?  If you’re caught participating, you may be liable for up to two years in prison!

Something about Canada that more people should know? Canada is an extremely large country!  We are the second largest country in the world, have the longest coastline of any country, and have more lakes than the rest of the world combined!

A Canadian that should be celebrated, and why? Canada’s multiculturalism is definitely something to be celebrated!  We are a country of many diverse people, something of which I believe truly defines us. 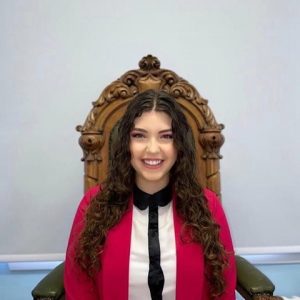 Jennifer Bou-yazbek is the Society’s Treasurer and is a dual citizen of Canada and Lebanon. Jennifer is studying Accelerated English Law at the University and is currently in Edmonton, Alberta, Canada.

Why did you join the Society? To be part of a society that represents the Canadian culture abroad while making it possible to meet and interact with people from various cultures.

How would you encourage others to join? By showing others that we are a society that is inclusive, fun and friendly. This society is filled with members from all over the world that share the same appreciation for various aspects of Canada, from the Hockey to Maple syrup & everything in between!

Do you have any fun facts about Canada? Caesars were invented in Calgary, AB in 1969.

Something about Canada that more people should know? Canada is filled with opportunity to make a better future for yourself and your family. Canada was there for me and my family during a very scary part of our lives in the 2006 war in Lebanon. Canada continues to be a haven that allows me to pursue my dreams and achieve my goals without sacrificing my freedom or peace.

A Canadian that should be celebrated, and why? I celebrate all the Indigenous people and POC in Canada that have faced injustice, discrimination or racism. It is important to personally strive to be anti-racist and educate self/others around you and celebrate and support the many amazing and diverse cultures in Canada. I promise to do that, and I hope that you will too.