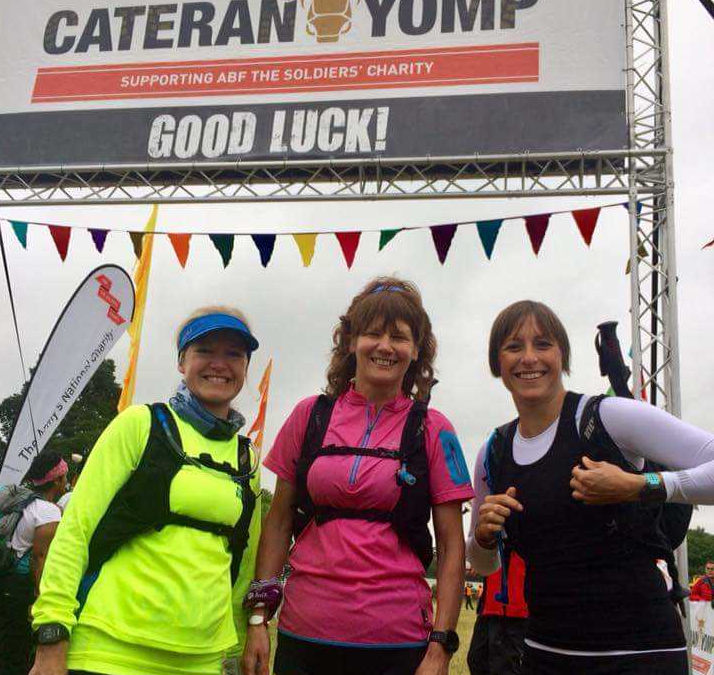 Two members of staff are celebrating their success at being part of the fastest female team to complete the gruelling 54 mile Cateran Yomp through Perthshire at the weekend.

The tenacious trio finished the route from Blairgowrie to the Spittal of Glenshee, Glen Isla, Alyth and home to Blairgowrie in just under 16 hours, making them the fastest female team to cross the line.

Their impressive time, which they achieved despite being forced to stop and find shelter from a thunderstorm, saw them finish in the top 20 of all 893 competitors who took on the challenge to raise funds for the ABF, the Army’s national charity. This year’s event is estimated to have raised around £250,000 for the charity, which will be used to support soldiers, veterans and their families. 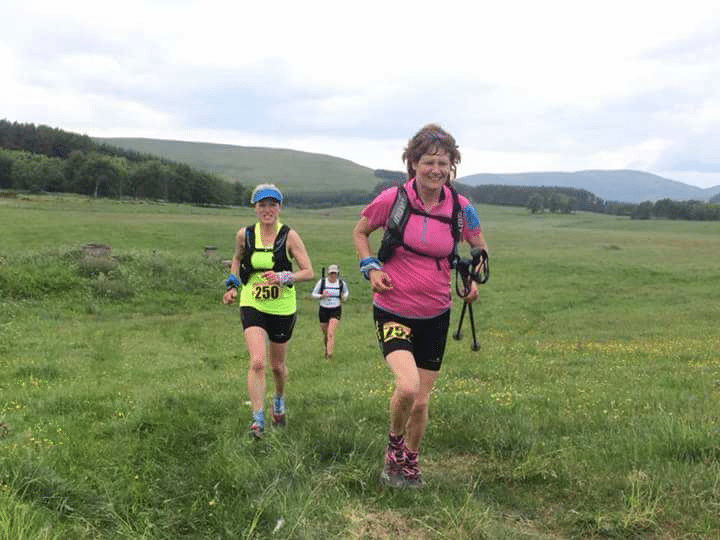 Jackie, Hazel and Lucia’s success is the latest in a seven year involvement in the event for the Dub n’ Mire team which was started by Jackie and her husband, fellow University staff member, Tim Heilbronn in 2012.

Named after a line from Burns’ poem Tam O’Shanter, the team has, over the years, won the Fastest Team Cup, the fastest mixed team five times and now the fastest female team. It has consisted of a number of friends and colleagues of the Heilbronns and together they have raised well in excess of £20,000 for the ABF.

This year Jackie, Hazel and Lucia have raised around £1400 through donations from friends and family and a quiz night at Craigie Bowling Club.

They followed an 18 week training programme at ISE consisting of 18 runs up to marathon distance, 21 gym sessions and 15 cross-training sessions.

“We included hill runs and speed sessions,” explained Hazel, who was persuaded to enter the event during the Principal’s Challenge last summer. “We tapered over the last few weeks to ensure we were in the best physical condition possible.

“We were delighted to be the first girls’ team back and to be in the top 20 overall.” 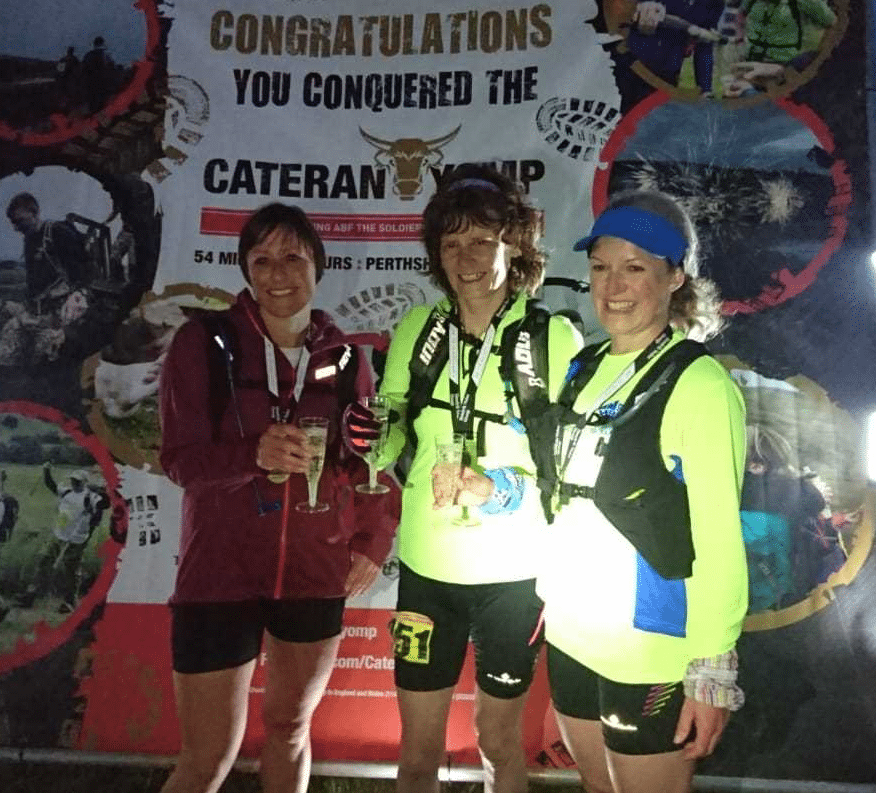 For Jackie the Yomp this year marked a return to fitness after shoulder surgery following a fall in another endurance race in 2016.

“I set myself the goal of completing the 2018 Yomp as my fitness motivator and to keep me going through the months of physiotherapy to restore the strength and rotational movement of my shoulder,” she said. “I also wanted to run as part of a ladies only team as there hadn’t been a fast ladies team since 2014.  Hazel became my training buddy and programme advisor.

“I have enjoyed the fitness goals, escaping my desk, heading across to ISE for gym classes, getting out into the Perthshire Hills, exploring new running routes along the Fife Coastal Path and trails around Dundee.  It has been hard work raising the sponsorship money each year but it’s all for a worthwhile cause.

“The atmosphere of the Yomp is fantastic. It is well organised and the marshals and the volunteers on all the water stations and checkpoints are so enthusiastic and encouraging, it gives you a great mental boost on your journey. And the scenery along the way is stunning.” 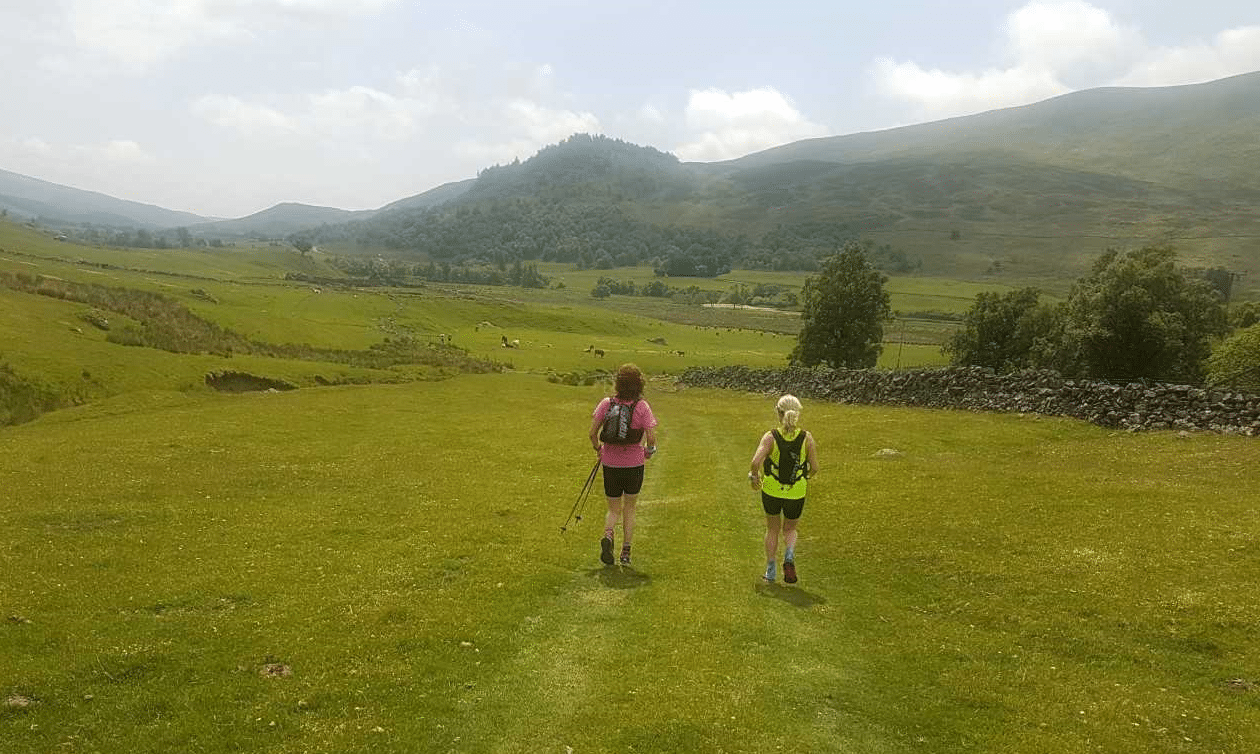 With husband Tim already retired from the event, Jackie is thinking about swapping her participant status to that of volunteer to help the next generation of yompers complete the course.

However she has no plans to hang up her running shoes and take it easy just yet, having already signed up for a number of road and trail races over the summer and the 30 mile Ochil Hill Ultra race in September.

“Tim retired from the Yomp last year although he was part of our support team this year, along with Hazel and Lucia’s partners,” added Jackie. “I have said I am retiring taking part in the event and I am sure I will probably sign up to be a volunteer/marshal but a year is a long time, so watch this space!”

Anyone wishing to sponsor the Dub n’ Mire team can donate on the Cateran Yomp page at https://www.soldierscharity.org/events/the-cateran-yomp/ by clicking the sponsor a friend button and searching for the team members’ names.

The Cateran Yomp is open to walkers and runners and attracts hundreds of participants every year. The next one will take place on June 8th and 9th 2019.