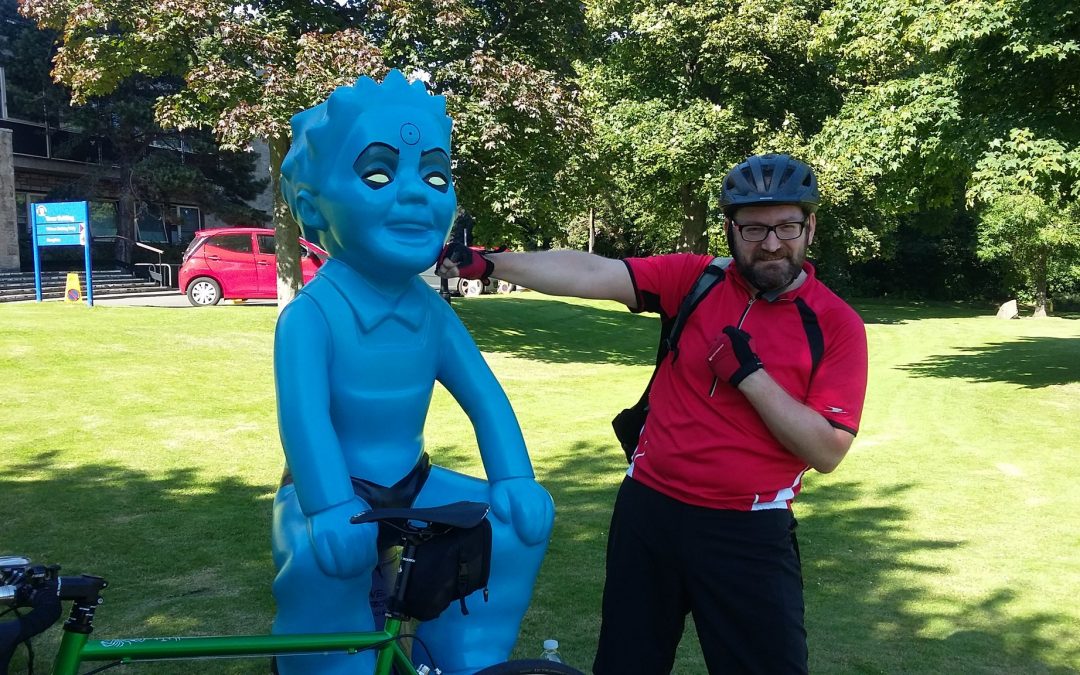 Dundee Comics Creative Space coordinator Damon Herd cycled the Oor Wullie Bucket Trail last week to help raise money for the ARCHIE Foundation, the charity behind the sculptures. He told One Dundee about his experience.

“On Tuesday 19 July (which turned out to be the hottest day of the year) I cycled the whole Oor Wullie Bucket Trail around Dundee. That’s 55 sculptures dotted across Dundee, Broughty Ferry and Carnoustie – no mean feat to do it all in one day! I thought of doing a bike ride as a way to help raise awareness of the fundraising aspect behind the trail, organised by the ARCHIE Foundation, the official charity of Tayside Children’s Hospital Appeal. The auction of the sculptures in September will also raise money for the appeal.

“As coordinator of Dundee Comics Creative Space I have been very involved with the Trail. DCCS were one of the many schools and educational establishments to take part by designing one of the wee Wullie sculptures. We held a competition among our Comics Club attendees, and then let them choose the final design. The winner was Cole Lawson, who designed ‘Oor Elvis’. I then painted the sculpture which is on display in Central Library – although sometimes he takes a trip on the mobile library!

“I started the bike ride by taking the train to Carnoustie on Tuesday morning, setting off from sculpture number 1 ‘Oor Golfer’ at Carnoustie Golf Links around 9.30am. It was great to see Emma White from the ARCHIE Foundation there, who had come to wave me off and wish me luck. My plan was to cycle to all 55 sculptures taking #oorselfies, and I hoped to finish about four hours later at the ‘When Wullie met Dr Manhattan’ sculpture (created by artist Sarah Coonan and designed by comics artist, and patron of DCCS, Dave Gibbons, and based on a character from his book Watchmen) at the University’s Tower Building.

“I used a mapping website to plot the best route and it calculated that there would be around 35 miles of cycling. It started off well; there’s a lovely bike path from Carnoustie, which caught the gentle cooling breeze off the sea. The sun was shining and at this point I didn’t realise just how hot it was going to get! I was soon in Dundee having ticked off several sculptures in Broughty Ferry, so the next stop was Stobsmuir Park to take my selfie with ‘Iron Boy’, one of several comics-related designs. Despite many of the sculptures being based on recognisable people and characters (e.g. Harry Potter, Iron Man, David Bowie) I noticed that many of the younger children visiting the sculptures would shout out ‘Oor Wullie!’ rather than the character he was painted as – great brand recognition after 80 years of Oor Wullie strips.

“As I cycled through the city I realised it was going to take longer than I thought. The cycling was going well but the selfie taking and posting to the DCCS twitter account was taking up lots of time. When I was about halfway through I stopped in the Overgate to get some photos at the Trail HQ and chatted to Cassie from the ARCHIE Foundation. I then grabbed some lunch before visiting other sculptures in town (the very shiny ‘Whar Ji Cum Fi?’ in The Howff being one of my favourites) and heading towards the Law. I thought it quite ironic that the one sculpture away for repairs that day was ‘Whars Wullie?’ in Dudhope Park! I got a photograph of its plinth though. As I climbed the Law the sun was BLAZING down and when I eventually got to the top I sat in the shade for a long time drinking lots of water. The view from the top was magnificent but that climb in the sun was the toughest part of the day.

“Next my route headed out to Camperdown Park and it was great to get some shade from the trees along the route. I was very pleased to see that ‘Silicon’ was at the entrance to the Observatory park and not at the top of the hill. The placement of the sculptures has been done really well. Even if you don’t know exactly where they are, you spot the Oor Wullies as you round a corner or look up a street and it’s great to spy them in out of the way places. By this time though the battery in my phone was dying and I was crossing my fingers each time I took a selfie that it would keep going. With only six sculptures to go I made it to Dundee Comics Creative Space where I took on some much needed water while I charged my phone.

“After half an hour I was able to do the last few sculptures around the University, Dundee Rep and DCA, and I rolled up in front of the Tower building just before 5pm. It was great to have a welcoming committee (and more water!) to greet me as I arrived, as the heat made it a tough day of cycling. It turned out to be almost exactly 35 miles and it took around 6 hours, including stops for lunch and phone charging, on what turned out to be the hottest day of the year.

“It was a great day though and I’d thoroughly recommend doing the whole Oor Wullie Bucket Trail by bike, even in one day! I posted my route (and my selfies) to the DCCS Twitter account for anyone who wants to see how I did it. I hope it isn’t quite as sunny thought – did I mention it was hot?”

You can donate to the Tayside Children’s Hospital Appeal through the ARCHIE Foundation JustGiving page or through the donation text service – just text TCHA15 £5 to 70070 to donate £5 to the appeal. You can change the £5 to whatever you wish to donate.

Click the first image to see a gallery of some of Damon’s photos from his adventures. 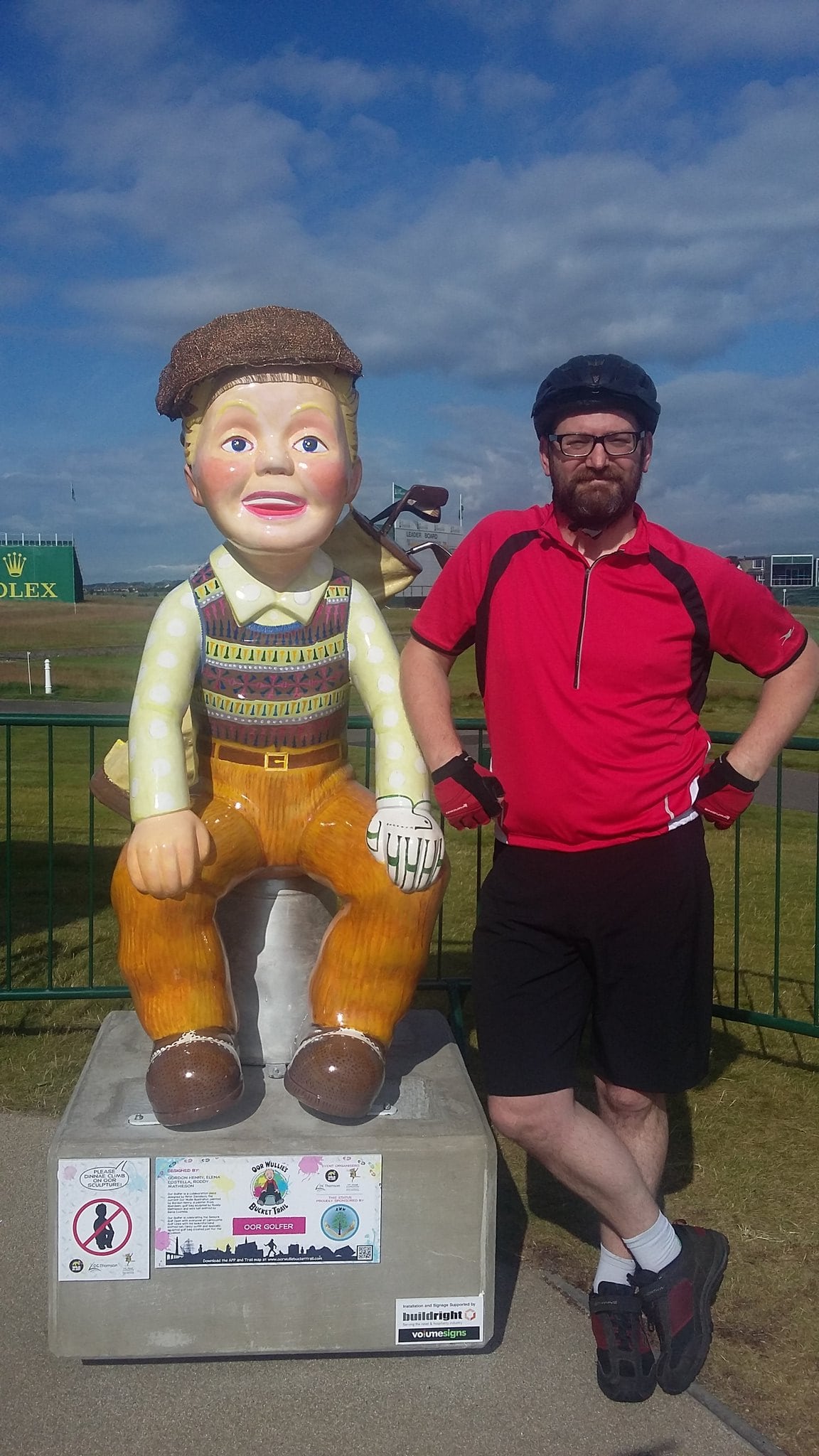 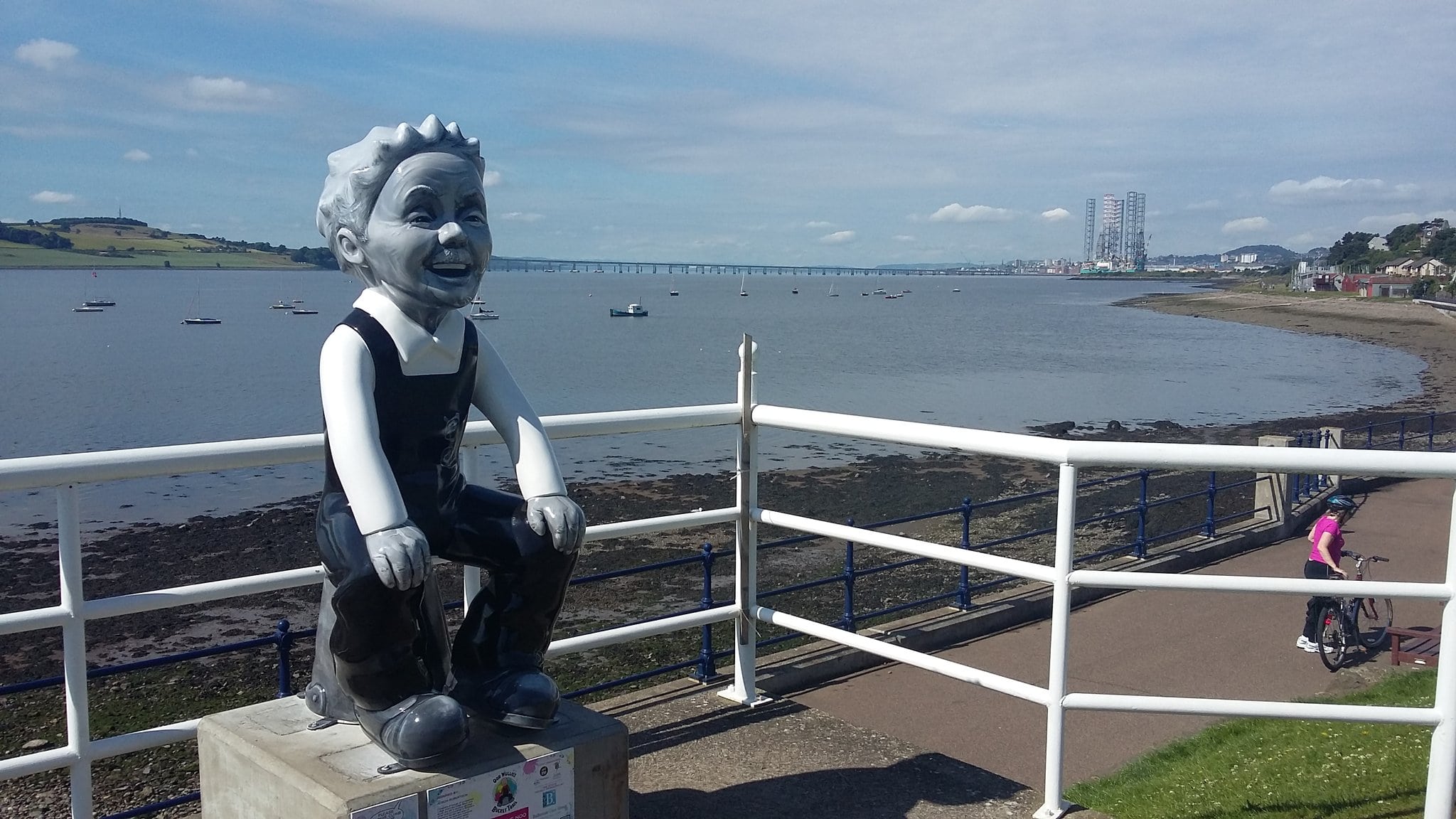 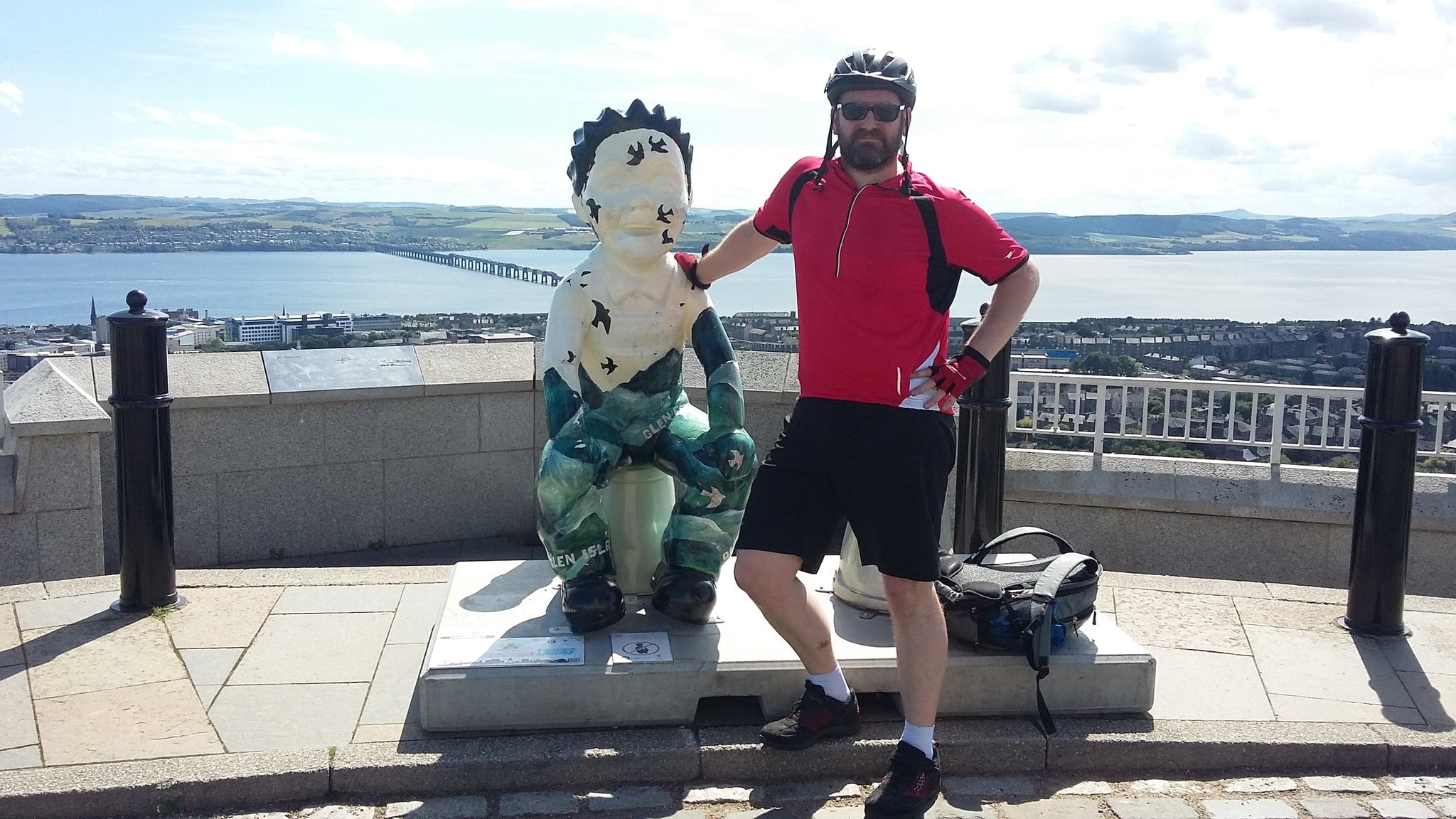 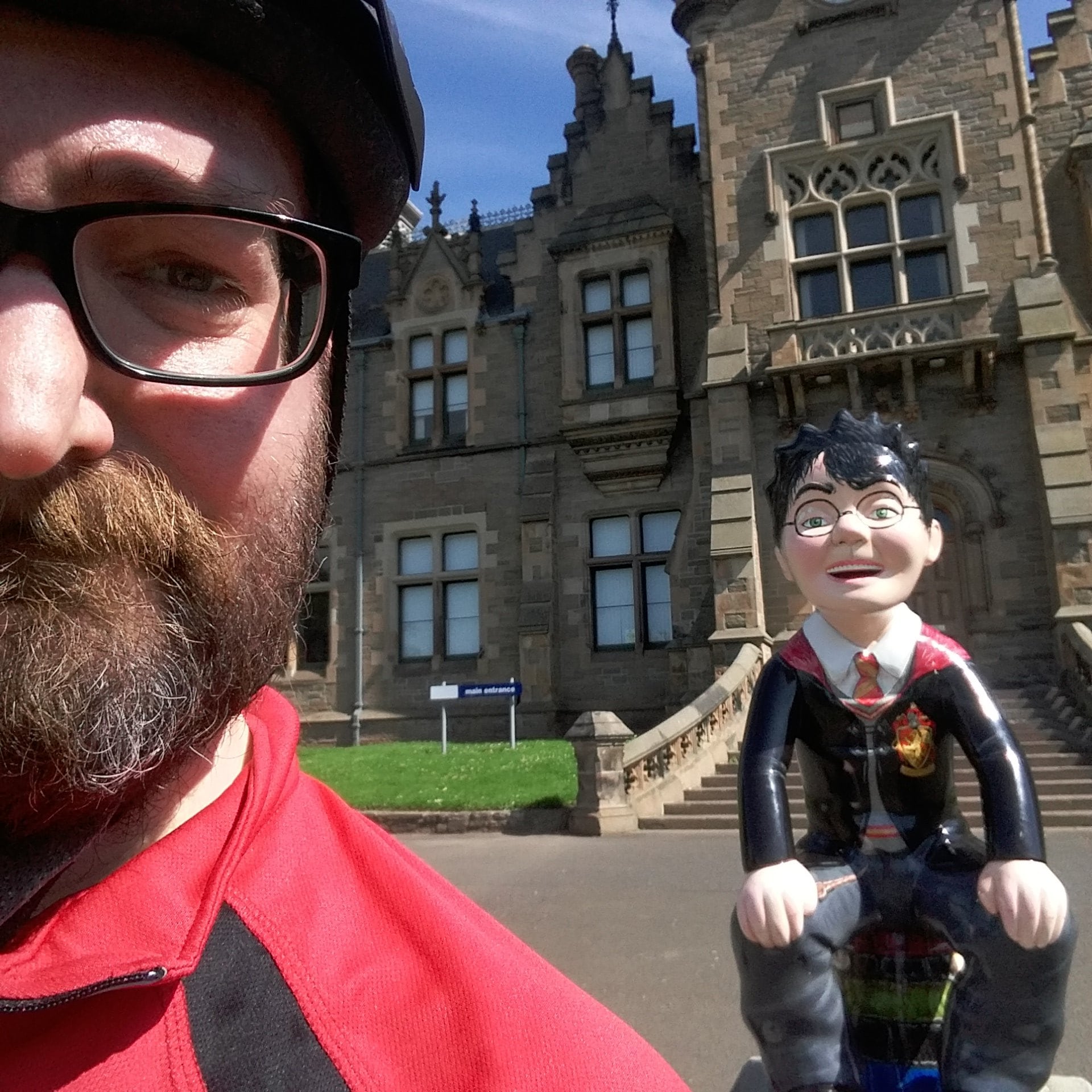 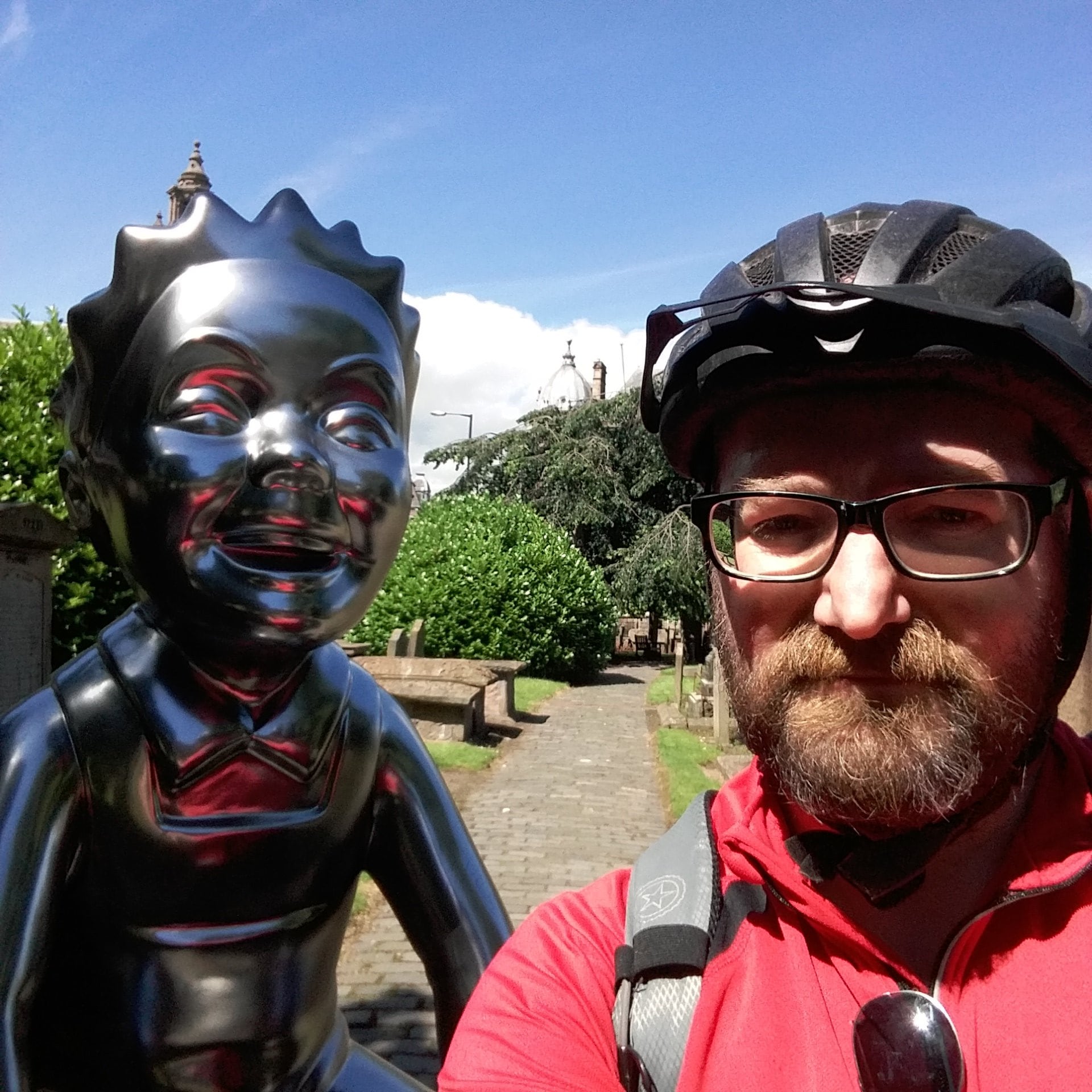 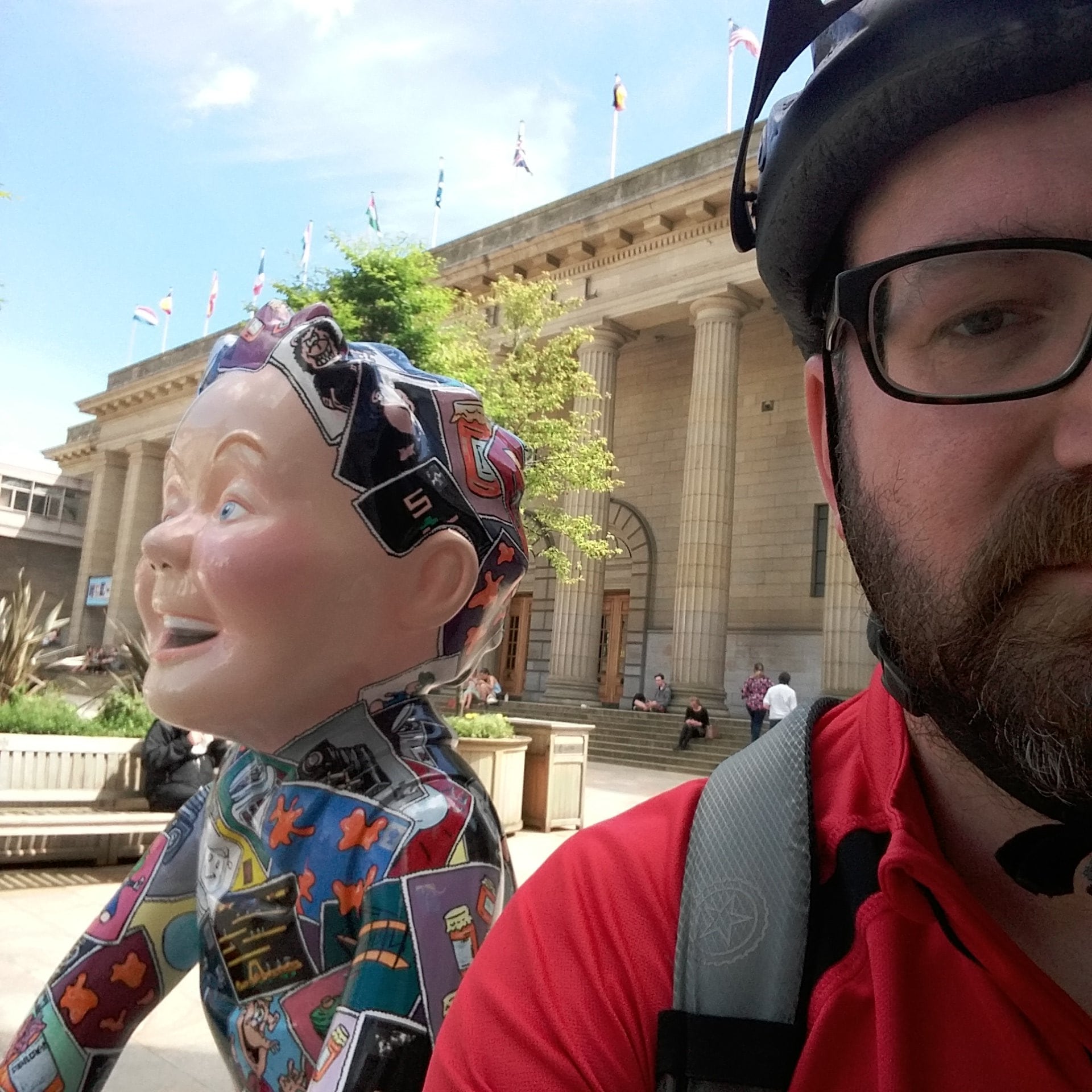 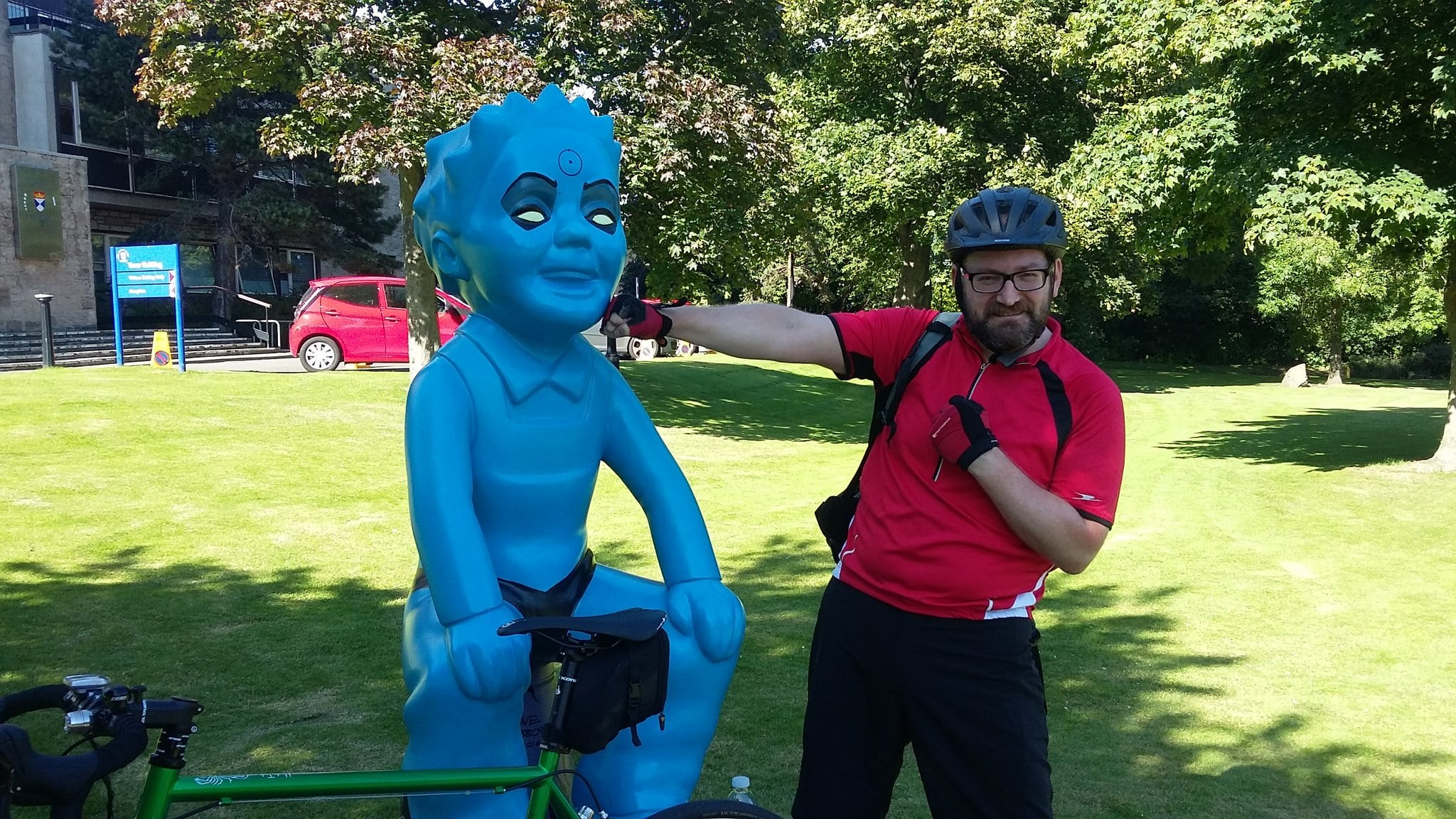