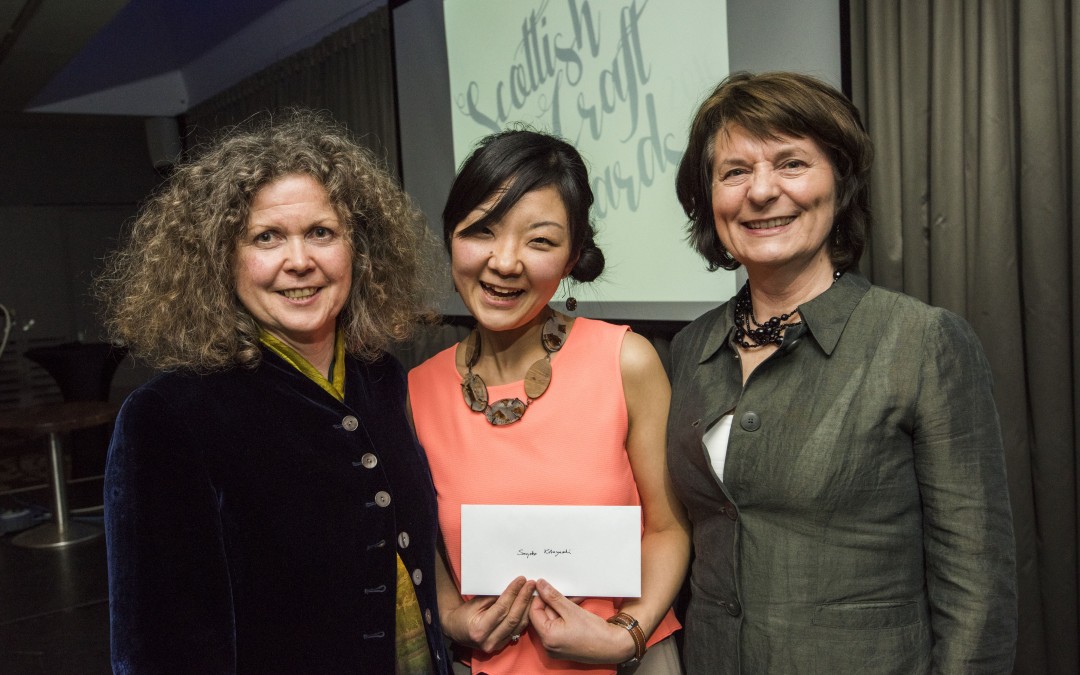 The School of Art & Design hosted the inaugural Inches Carr Trust Scottish Craft Awards last night, with key players from Scotland’s crafts, art and design industry gathering in the city to find out who would win one of four prizes totalling £10,000. Robin Blair, Chair of the Inches Carr Trust, said, “We hope that these new awards will be an encouragement to the many marvellously creative graduates who come out of the Scottish art and design colleges.”

After a three course dinner at The Apex City Quay Hotel & Spa, the awards ceremony saw four graduates of Scottish art schools each take home £2,500, including our very own Sayoko Kobayashi, who graduated from the School of Art & Design in 2014. Sayoko is a jewellery designer and maker and is Designer in Residence in the School of Art & Design. Since graduating, Sayoko has been designing and making jewellery with a variety of materials (such as precious metals, wood and plant seeds) to explore the concept of wabi sabi in contemporary jewellery. Wabi sabi represents a comprehensive Japanese world view centred on the acceptance of imperfection; according to the philosophy of wabi sabi, everything in this physical world is transient and moving towards degeneration.

Sayoko submitted her application to the Trust alongside other graduates of Scotland’s five internationally renowned art and design institutions, including Duncan of Jordanstone College of Art & Design, Glasgow School of Art, Gray’s School of Art, Heriot Watt University School of Textiles & Design, and Edinburgh College of Art. The purpose of the awards is to allow the winners to advance their skills and knowledge within the craft field, and Sayoko plans to to explore techniques using precious materials not only from jewellery but also from other crafts, including traditional Japanese techniques such as Kintsugi or Zogan (wood inlay). She is eager to learn and adopt these into practice, broadening her range beyond the commercial and wearable, into art jewellery. Sayoko will continue to combine Scottish and Japanese influences and materials as a selling point of her work.

Entries for the 2017 Inches Carr Scottish Craft Awards are open for submission from November, with a closing date of 6 January 2017. Future events will see the awards tour the other four Scottish art schools.

Many congratulations to Sayoko and to our colleagues who organised the first ever Scottish Craft Awards. Check #scottishcraftawards on social media to find out more about the evening.