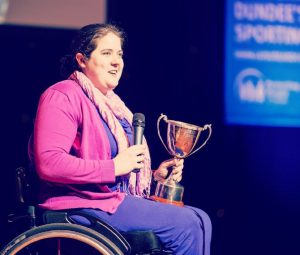 The Queen’s Birthday Honours list, announced at the weekend, included a British Empire Medal (BEM) for Dr Elizabeth Ferris, Honorary Clinical Teacher in the School of Medicine and a Foundation Doctor with NHS Tayside, and founder and chair of Dundee Dragons Wheelchair Sports Club.

We asked her how it felt to receive recognition in the Honours List for her services to disability sport in Scotland.

One Dundee: How did it feel when you were told you would be included in the Honours list?

Elizabeth: It was very much a surprise, but a lovely one. I didn’t get involved in what I do to search for recognition or awards, I do it because I love sport and wanted to people to be able to get involved with wheelchair sport. But it is nice when the recognition does come, not for me particularly but for the club and in terms of raising awareness of disability sports in Scotland.

It has been a funny period because they let me know in May I would be receiving an honour but of course you are told not to let anyone else know. They weren’t able to tell me then when they would be announcing it, as like everything else it has all been a bit up in the air due to the pandemic. I did tell my Mum but it has been a bit of a relief now to be able to tell other people.

One Dundee: How long have you been involved with the club?

Elizabeth: I founded the Dragons in 2013. I was a second-year medical student when I had a spinal cord injury caused by a spinal stroke in 2012. I was completely healthy up to that point and loved sport. That love didn’t disappear when I returned as a wheelchair user but I found there really wasn’t any place locally for people to engage with team-based wheelchair sports at a high level. To do that meant travelling to Glasgow and I didn’t feel that was a realistic option for me or others.

So I set out to see if we could get something started, sure there was some like-minded folk around who might also be interested. Happily there were and the club has been going ever since.

One Dundee:  Are you still an active participant, as well as being founder and Chair?

Elizabeth: I was selected to play for Scotland in the Wheelchair Rugby World Cup, which was a great thrill. But after that I came to realise I could not maintain that level of commitment, so I have scaled things back a bit from that kind of elite level. Now I just have a bit of a throw around with the other members of the club, but nothing serious.

One Dundee: You are a Foundation Doctor in the NHS, as well as a teacher in the Medical School, and still do all of your voluntary work with the Dragons. How do you fit it all in?

Elizabeth: That’s a very good question and sometimes it does seem like the days should be 28 hours long to give me enough time! I do make time for the club and sport though because I have found it is very important to have something to focus on that isn’t medicine and work. It is really important to get some of that work-life balance.