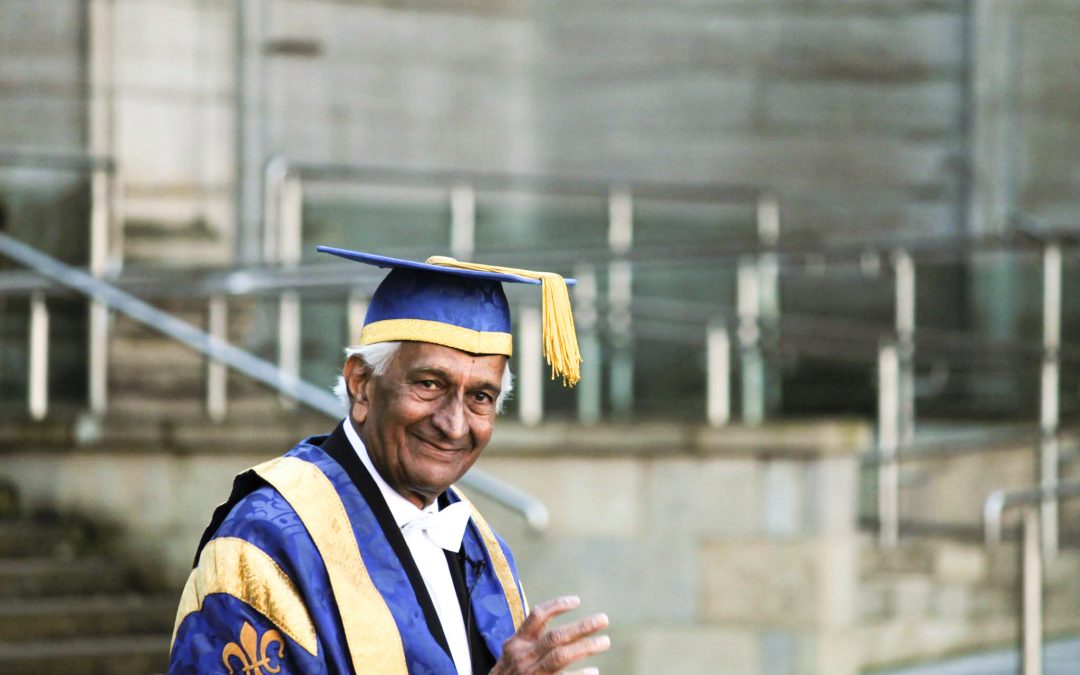 Former Chancellor Lord Naren Patel discusses how chance first brought him to Dundee and why he never left. 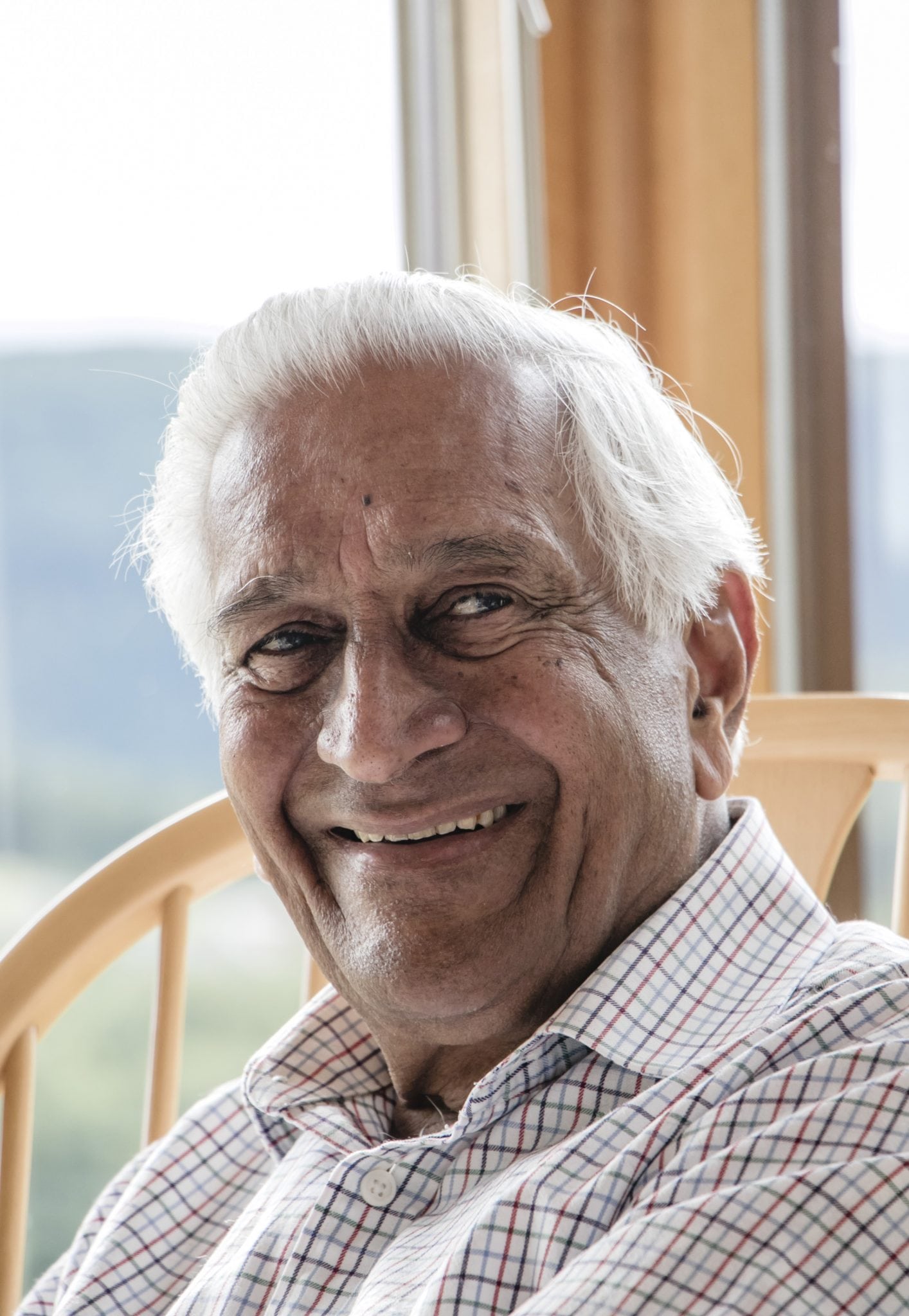 Narendra Babubhai Patel was born in Lidh, Tanzania (then the British Protectorate Tanganyika) in 1938 and attended secondary school in Dar es Salaam.  Despite nobody in his family before him ever going to university, he always wanted to study Medicine.

“I’ve no idea why. I never ever thought I’d do anything else.”

He travelled to London with the aim of taking A Levels and applying to university.

“I came to the UK to study Medicine. My original intention was not to come to a Scottish university. It was purely by chance, or rather by mischance, if you like. Coming from a country that was a protectorate of the British Government, I had to make my application through the Colonial Office and there were restrictions on how many could apply. But that jurisdiction of quotas didn’t apply to Scotland, so I applied to Edinburgh and St Andrews.  I was asked to come for an interview in Dundee at the Old Medical School.”

It was 1958 and Naren was not yet 20. He was interviewed by Professor Ian Hill and Professor Robert Hunter who told him that if he passed his A Levels he could start in October.

“Then I was allocated to Dundee. Although I graduated from Queen’s College in St Andrews, you could either do six years at St Andrews or six in Dundee or three years in each.  I did all six years in Dundee. We were a smallish class, and most of the time it was fun being a student, although second and third years were tough. I stayed in digs in Rankin Street, but for my final year I stayed in Belmont Hall – it had just opened – on the basis that it would be more conducive to my studies than digs. 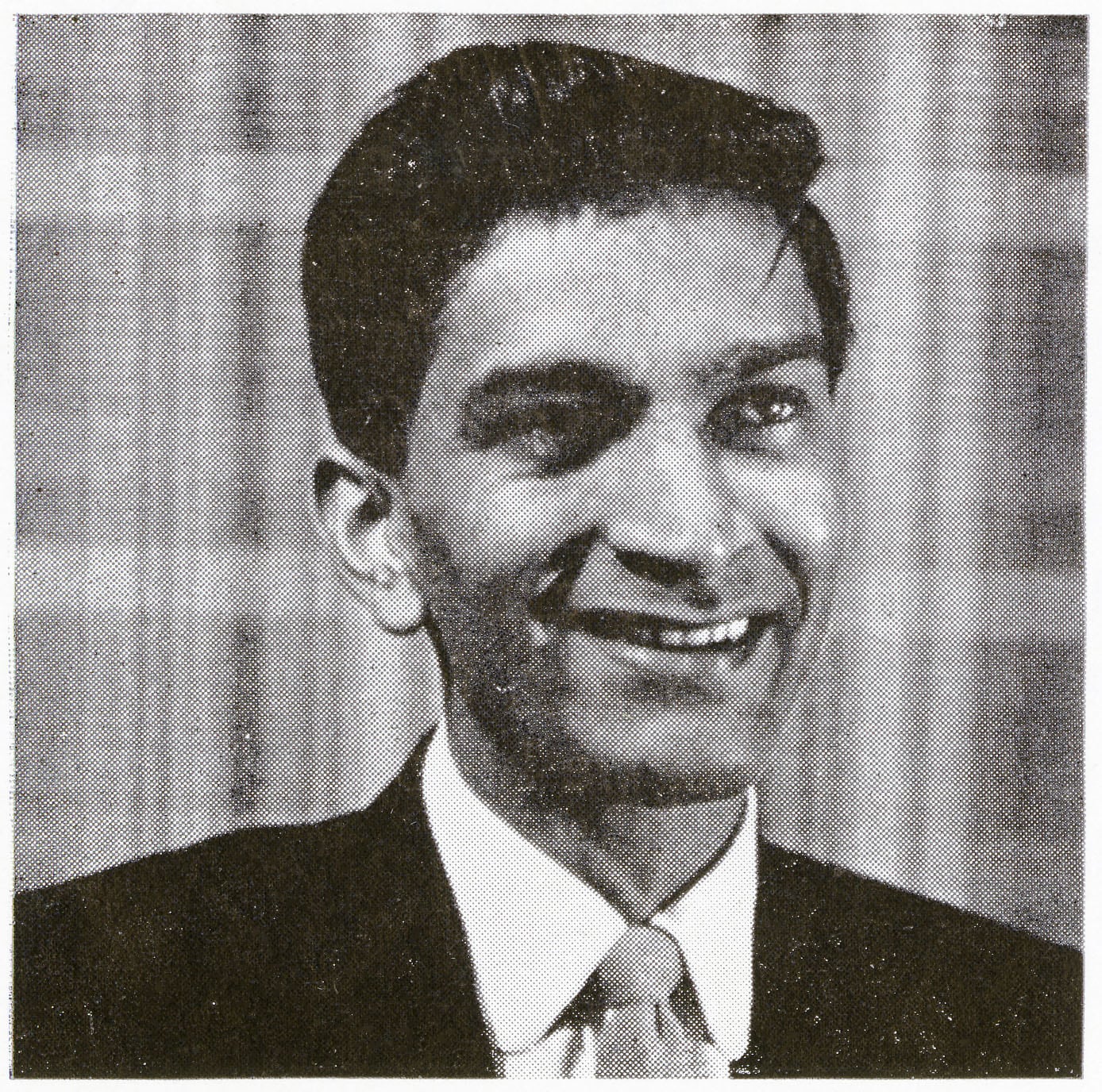 “As students we could do locums in different subject areas. I did quite a lot of locums and it was then I developed my interest in obstetrics and gynaecology. Then Professor James Walker took an interest in me and at the final dinner before the results came out suggested that after my house job and doing some surgery I should come back to Dundee.  I took jobs with the surgeon Mr Whyte in Penzance for about a year, then came back. And after that I never left.”

“Dundee actually made me. It was by chance I came here and met the friends and colleagues that I have worked with and who have supported me.  Dundee made me in every way. So if someone asks me what one thing has brought me all I have I would say luck.” 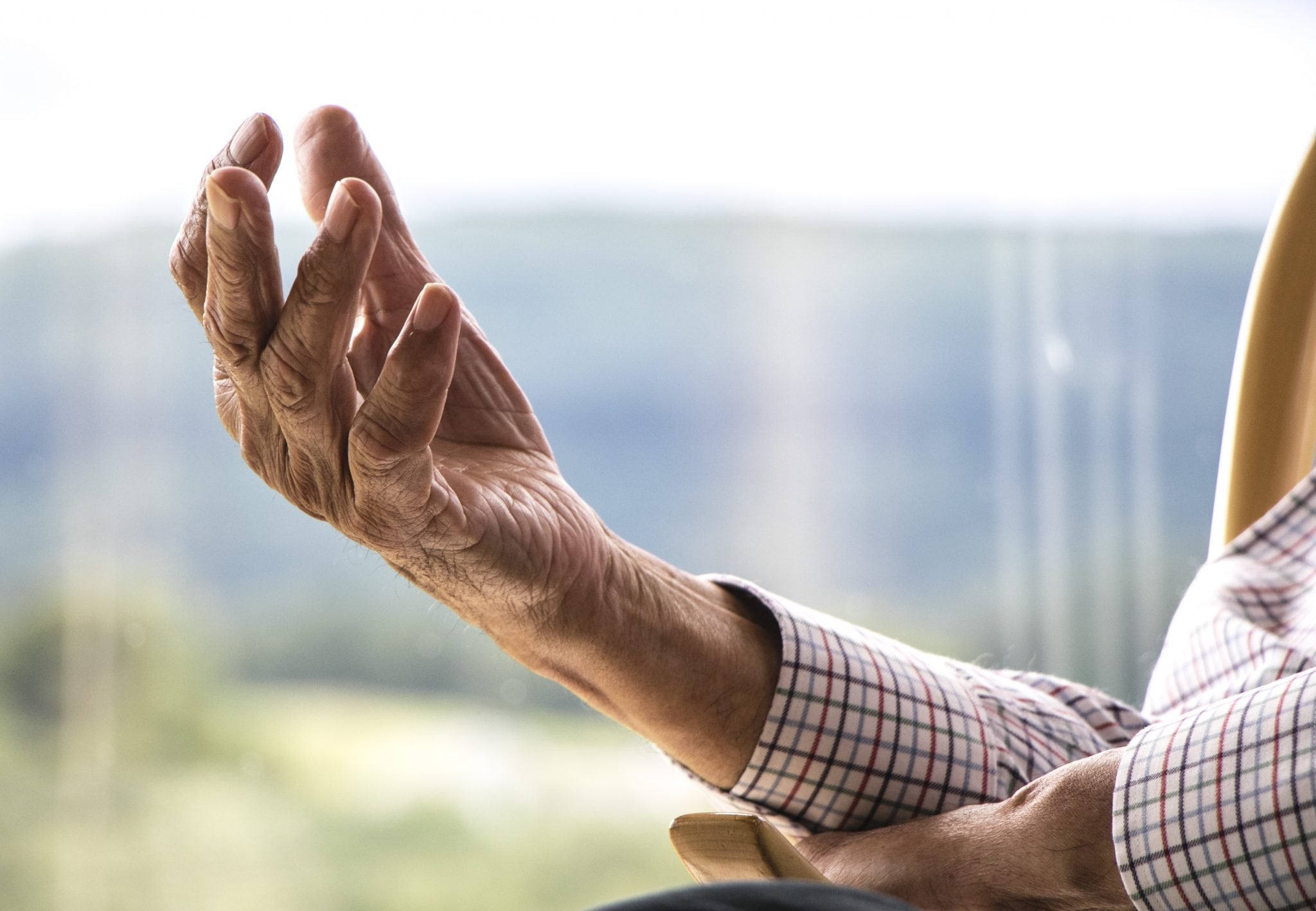 In these past eleven years, Naren conferred a remarkable 52,641 degrees during his time in office.

Following his graduation in 1964, Naren worked for over thirty years in hospitals in Dundee, including Maryfield, Dundee Royal Infirmary and Ninewells. His academic and clinical interests have been in the field of high risk obstetrics, and he published widely on preterm labour, foetal growth retardation and obstetric epidemiology.

“So I’ve gone from student to Chancellor with all my jobs in Dundee. This was unusual in Medicine, as usually you have to move around a lot in junior jobs. I was looked after by Professor Walker. I did go to Florida for my research on premature babies, but came back and became a senior lecturer, then was given an Honorary Professorship.”

One of the effects of working locally in Dundee has been that as Chancellor he has been able to award degrees to graduates who he delivered as babies. 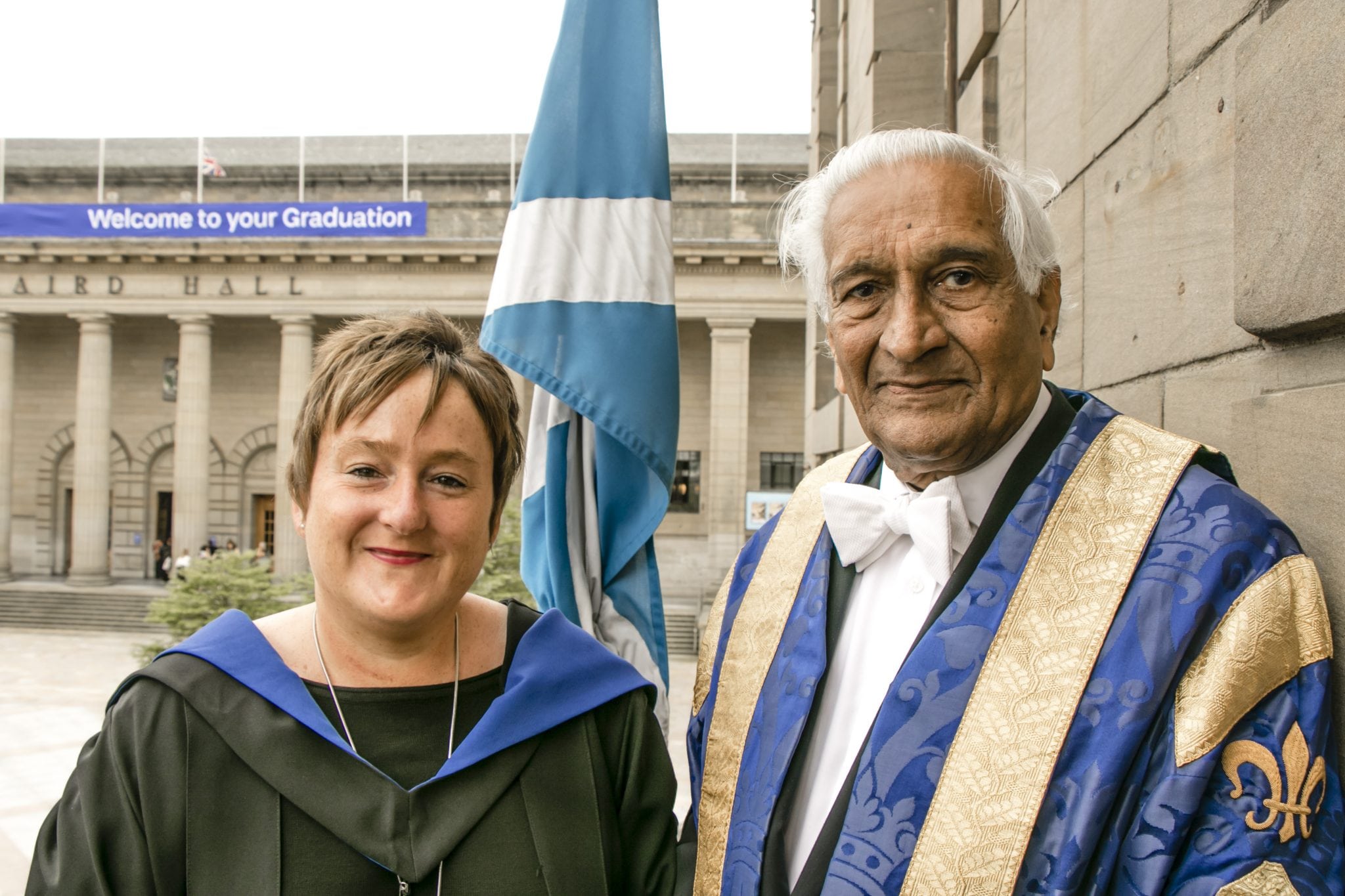 Sarah Beattie, who graduated on Thursday, 22nd June 2017 collected her degree from the same man who saved her life 30 years ago. Born 14 weeks premature, weighing only 1lb 5oz, Lord Patel was the consultant obstetrician who helped deliver her on February 4th, 1986.

Naren met his wife Helen while they were both working in Maryfield Hospital in 1968. They married in 1970 and had three children. Helen had also graduated in Medicine from St Andrews.

Alongside his jobs in Dundee, he became involved in many national organisations. He is a Fellow of the Academy of Medical Sciences and the Royal Society of Edinburgh, honorary Fellow of several Royal Colleges in the UK, Ireland and overseas, and holds honorary doctorates in the UK and overseas, including one from the University of Dundee conferred in 2004. He is patron of a number of charities, a board member of several others, and has been closely involved in developing centres for training and treatment in Africa for obstetric fistulas.

Although retired from practising medicine, he now sits in the House of Lords following a knighthood in 1997 and elevation to the Peerage in 1999 as Baron Patel of Dunkeld in Perth and Kinross. He has served as Vice-President of the All-Party Parliamentary Group on Maternity Services and of the Group on Infertility Services, as well as being Chairman of the Stem Cell Bank Steering Committee, UK Stem Cell Network and Chairman of the National Patient Safety Agency of England and Wales. He is currently Chairman of the Science and Technology Committee and of the Long-Term Sustainability of the NHS Committee, and in September gave the William D. Stubenbord Lecture on “In Search of Affordable Health and Social Care” at Cornell University.

He became Chancellor of the University of Dundee in 2006. In these past eleven years he has become one of the University’s best-loved characters, always taking a keen interest in the students and lightening the formality of graduation ceremonies with his good humour.  He has conferred a remarkable 52,641 degrees during his time in office.

“Giving so many people their degrees on the happy occasion of graduation made me realise something important about the University. It isn’t just giving a degree, but everything that degree means for the students, their families and their future. So for me this has made graduations magical. 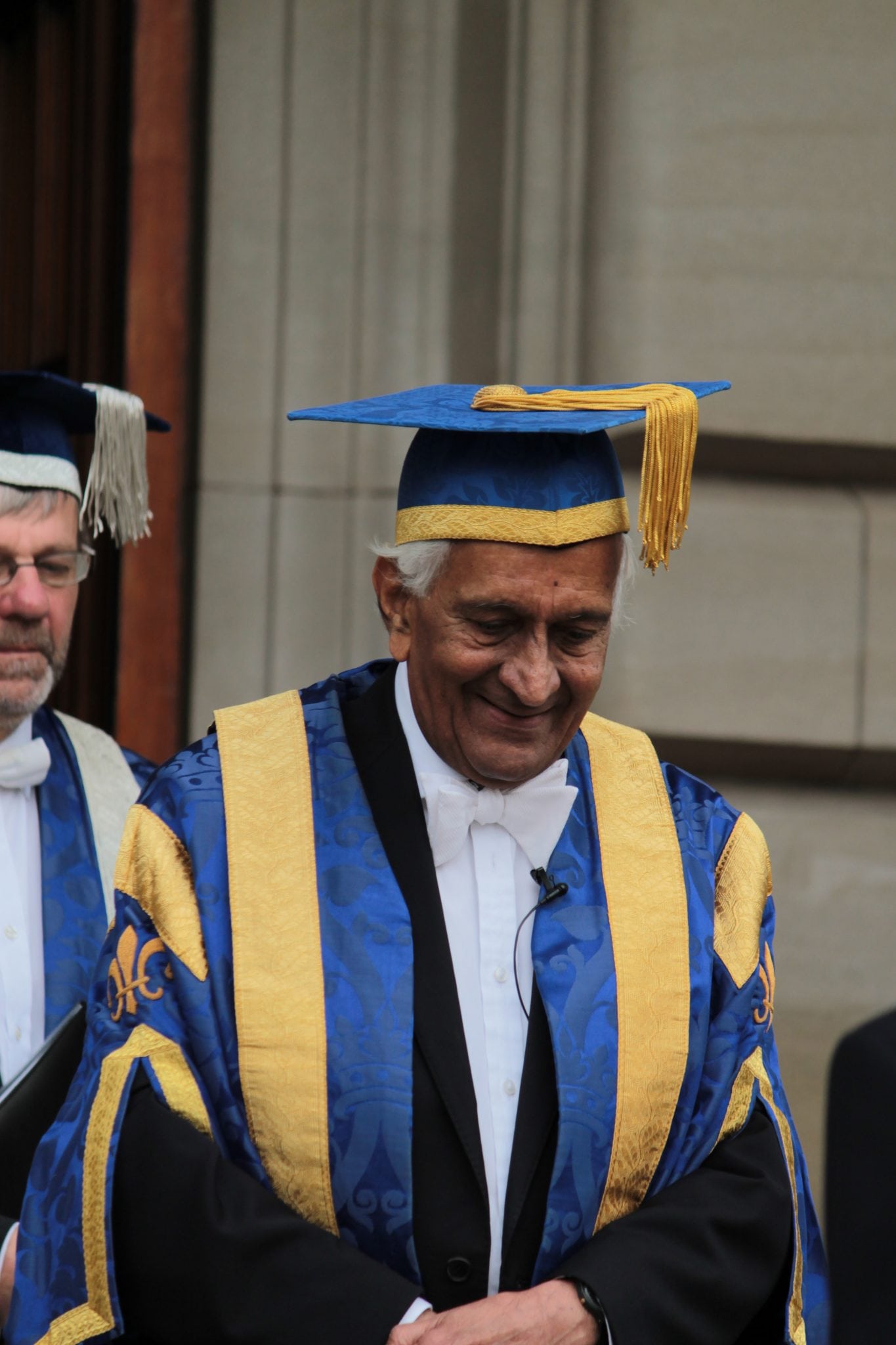 “In my time the University of Dundee has gone from being a college to becoming independent in 1967 and developing its own strong identity. It has gone from strength to strength. The Medical School is still one of the strongest in the country.  It has been a great honour and privilege to be Chancellor.”

Lord Patel nearly didn’t make the interview back in 1958. While in London doing his A Levels he ran out of money and nearly returned to Tanzania to be a clerk.  He was lucky enough to be lent the money to stay.

We have all been the beneficiaries, and are fortunate to have had him.