My journey to becoming a science communicator 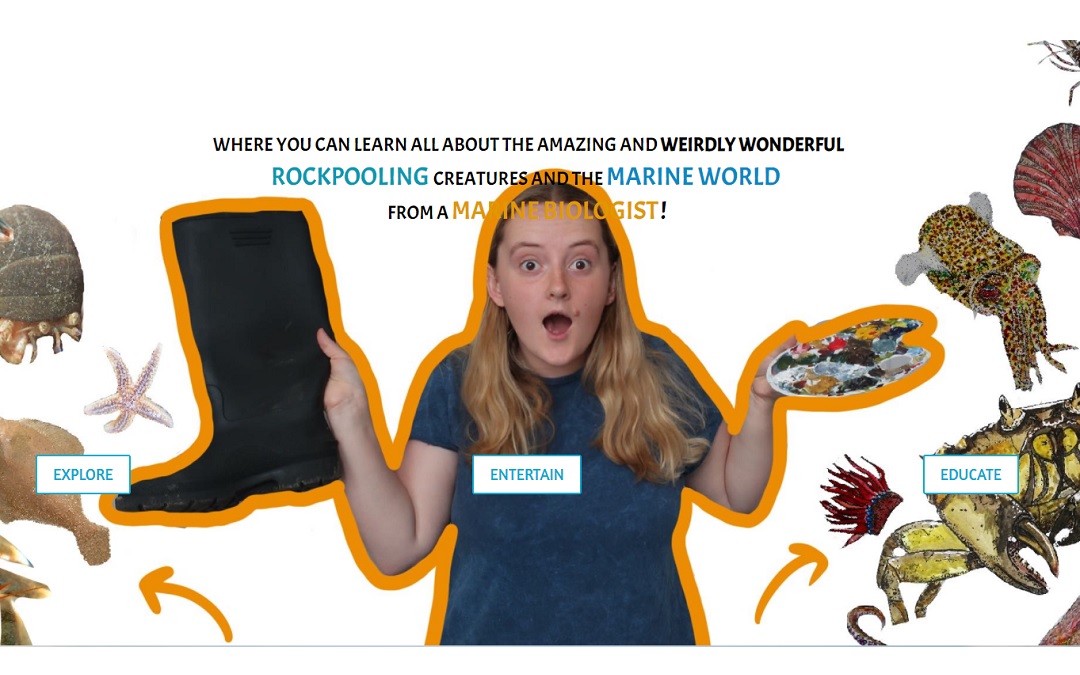 When introducing myself it’s easy for me to say ‘My names Elizabeth Mills, I am a PhD researcher in the School of Science and Engineering at the University of Dundee’ but over the course of my PhD I have also entered the world of science communication. And despite having my own website for five years and a YouTube channel for the last two years, where I have posted weekly content about the weird but wonderful world of our oceans, I never called myself a science communicator. It wasn’t until I recently competed in two competitions FameLab (and got through to the UK Finals) and the 3 Minute Thesis (3MT) competition (University of Dundee Winner) I was confident enough to describe myself as a science communicator, which looking back now think I could have done all along.

Scientific communication is taking the research or information from any scientific field, whether your own or others, and sharing it with the public in an understandable and engaging way. Within academia this is a particularly useful way to share your own research wider than the academic community and is often required when research has been publicly funded. And it can be a fantastic personal experience. So for anyone who has a passion for speaking about their research to the public, I hope that sharing my journey to realise I am a scientific communicator, and some tips for doing so, will be of use to you.

My scientific communication journey started over five years ago during my undergrad in Marine Biology at Swansea University, where I set up a website (www.marinemumbles.com) where I drew scientific illustrations of marine creatures and shared the facts and information I learnt about them. I really enjoyed having this platform to share the endless amount of bizarre facts about the creatures you find in the sea, but in the midst continuing at University to undertake a very busy Masters, finding the time to write blog posts on top of all my academic writing was draining. I realised I needed to find a new medium for sharing what I knew.

So I entered the three-minute thesis competition for the first time at the University of Dundee. It was the first time it ran at the University and I have always loved public speaking and thought I would sign up for the challenge. The problem came when a big ol’ camera was suddenly in my face and for the first time the nerves of public speaking got the better of me and I really struggled over my words. The talk did not go well. But it was actually the utter frustration that I had crumbled under the pressure of the camera, combined with my thoughts that making videos would be a fun/better way to spread marine cheer, that made me finally take the plunge to start a YouTube channel. I have never looked back.

A steep learning curve of editing, talking to camera, time management (to manage filming then editing for 8 hours on top of a busy PhD schedule) followed for the next two years. A learning curve I don’t think will ever stop, although it feels more like habit now rather than the uphill battle it was at the start. My biggest piece of advice for anyone considering the world of YouTube, is to just start making videos and putting it out there. You are able to learn new skills from the absolute beginning, faster and faster just by making videos each week. Before I knew it I was confident in front of a camera and ambitious enough to undertake making my own documentary series ‘When the Tide Retreats’, vlogging my rockpooling adventures and filming my public talks to share them with more than just the in person audience.

YouTube was really the start of my ambitions to grow my scientific communication. It moved from something I thought would just spread joy, hoping that others would experience the same feeling I did learning about our oceans, to making my own message and sharing something I really believed in. Showing the UK what weird but wonderful marine life that we can see in just a pair of wellies for free. If we can become more connected with our local oceans, I really believe that we will be more motivated to help protect it.

Through my growing YouTube and social media connections people were reaching out to ask me to do science festivals, which have been a joy to participate in. A lot of my science communication focuses on rockpooling, because it’s the easy and exciting way to draw in the public. So at science festivals I get school kids to make marine monsters by teaching them about how their local rockpooling creatures move, eat and protect themselves then they mash together all their favourite ways of living into one marine monster. The joy of their faces making their monsters is priceless, but importantly they are also learning biology, ecology and natural history. Its engaging, fun and an important point that scientific communication doesn’t have to always about your very niche specific academic project, because my own research isn’t specifically on rockpooling. My own PhD is looking at changing the surface of concrete to stop marine species, just like the ones you find rockpooling, that have come from other countries, mainly on the bottom of ships, from settling in harbours as they can threaten native rockpooling creatures. And although you may think there is much less demand to learn about this specific bit of science, I have found some of the most rewarding scientific communication is when I have spoken about my research and specifically under the challenges of public speaking competition.

This year I signed up to participate in FameLab 2020 competition, a competition looking to find and showcase the best science communicators in the country. FameLab judges you on three key criteria of content, clarity and charisma where you describe your PhD thesis, or scientific idea, in three minutes. Three minutes is a cruel amount of time, very few to no mistakes can be made, each word counts, each pause must be placed properly to have the best effect. It makes it worse when every day you work on your research, you could speak for days about the intricate things you do, but three minute is all you’ve got. It adds unbelievable pressure which can sometimes lead to what happened in my second attempt at 3MT where I froze for 30 seconds 7 words into my talk with my head in my hands. The talk did not go well, again. But don’t let that put you off keep going, cracking the three minute presentations style means you can probably go on to present anywhere for any length of time. I think it by far the toughest to nail but there is honestly not better way to force you to really hone public speaking skills and take them up a notch.

The first round of FameLab was in a pub in Edinburgh hosted by Sam Langford, it was a great night where I met some wonderful researchers from Scotland all excited to share their work. It was also an evening full of hand sanitizer because it was a week or so before the UK went into lockdown. I was shocked to be chosen as one of the two people to go through to the Scottish finals, scheduled a month later, which meant the venue of the next heats was not a lovely Scottish pub, but my living room. Competing on a timed competition over Zoom, in your living room alone has its challenges; the worry of noisy upstairs neighbours distracting you; the lack of an audience for that adrenaline kick; will the internet connection be ok? For anyone nervous about entering competitions, either in person or online, I will say is the people that I met at each round of FameLab were wonderful and made the experience fantastic. When you meet people who enjoy the challenge of sharing their research just as much as you, it means even if you don’t win it is such a rewarding experience.

Over this Scottish Final Zoom heats, which included a wonderful host Jaime Gallagher and even a pub quiz, I found out I was one of the two winners and had made it to the UK finals! With this I got to attend a scientific communication masterclass, usually this was over a weekend away in London, it was now over Zoom but the trainer Huw James and the other UK contestants more than made up for the lack of physical meeting with their enthusiasm and all round kindness. It was instant bonding experience too, with everyone rooting for each other and a WhatsApp group that we now all share scientific communication opportunities on together. The UK Final was amazing, with judges such as Dallas Campbell and host Greg Foot it really was something amazing. But it was the talks from the other contestants that were awe inspiring and made it a night I won’t forget. I didn’t win this time, but was happy to lose to such an incredible talented bunch of scientific communicators. We all get to attend Cheltenham Science Festival, where the finals would have been held, next year and I can’t wait to meet them all in person. I got so much more out of this experience than I ever expected and walking out with the confidence to now call myself a scientific communicator was priceless.

I used what I had learned through FameLab and once again for the third time entered the 3MT competition, because… well I’m stubborn. It wasn’t so much entering to try win, but to show myself I could compete the 3MT competition with a talk to the best of my ability, something the last two years I hadn’t been able to do.  It also felt like a very much like coming full circle, because this year the competition is all online and you have to submit a video. How odd, that two years ago I learned to speak on camera because of my failure in this very competition, would now pay off because much to my surprise I won the Dundee University heats.

Now if you look on my website, as well as hundreds of underwater photos to help you identify marine creatures and scientific illustrations, there is now an introduction to myself describing me a PhD student, scientific communicator and scientific YouTuber. There’s even a whole page all about my specific communication events and talks. Something until this year you would not have found mention on there.

Within this post I have focussed on the benefits of scientific communication to yourselves as the communicator because I really feel it has so many benefits. Whenever I felt lost in the vastness of my PhD, the competitions helped me see clarity. It made me ask myself what are the most important aspect to fit into three minutes. My YouTube channel has helped me grow my network, learn new skills and break up each week of the PhD which can at times blend together with long months undertaking the same task. It takes commitment, especially time, but if this is something that sounds interesting to you then please just give it a go. Science communication can be so much more rewarding than I could have ever imagined and something I don’t think I could give up, no matter where my career path leads.