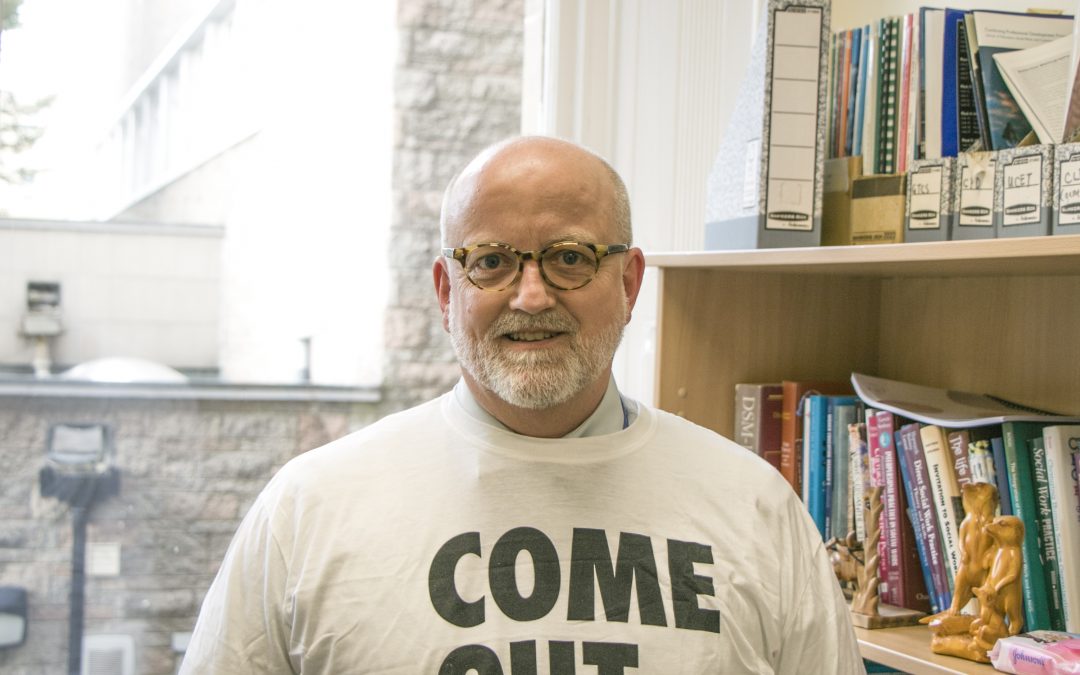 “One of the issues raised during the Dundee consultation was that young people feel they have to leave Dundee and go to Glasgow or Edinburgh, or even further afield, in order to be who they are, to feel themselves. It told us that we need to increase visibility of LGBT+ people around the area to show that you can live and thrive in this community.”

Let’s start right at the beginning – how did Dundee Pride come about?

It was quite simple really. Two organisations, Pink Saltire and LGBT Youth Scotland, did a consultation in Dundee engaging the LGBT+ community about whether they would like a Dundee Pride. The result was very clear – the community was keen to do something.

I was appointed Co-Chair alongside Tommy Small, Director of the dance company Shaper Caper. It was an application process for which we had to provide our CV and application, and we were interviewed for the positions.

Is this standard practice in establishing Prides across the country?

Yes, and it’s helped to grow the network of Prides across Scotland. There have been a lot of new Prides over the last couple of years. It used to be that just Edinburgh and Glasgow would hold celebrations but the number in Scotland has increased significantly. Fife had their first Pride event last year, Perth and Grampian have just had their first Prides, and Dundee is this month – there are many Prides now in Scotland.

One of the issues raised during the Dundee consultation was that young people feel they have to leave Dundee and go to Glasgow or Edinburgh, or even further afield, in order to be who they are, to feel themselves. It told us that we need to increase visibility of LGBT+ people around the area to show that you can live and thrive in this community. It’s also about trying to push back against hate crimes, which sadly still do happen, by raising awareness of the LGBT+ community so people can feel comfortable in their own environment.

That’s quite an incentive to progress Dundee Pride quickly.

Indeed. We became a registered charity in February 2018 and so it’s been a whirlwind trying to get things organised in time for September since then. There have been other attempts at organising Pride in Dundee over the years, but for various reasons it hasn’t happened, and I think Pink Saltire and LGBT Youth Scotland were instrumental in setting the ground work for getting the organisation started.

Having helped secure a Board of Trustees, Pink Saltire and LGBT Youth Scotland have stepped back. We now have six Trustees who are leading the organisation. Currently we’re focusing on Dundee Pride 2018 but we also want to recruit more Trustees. We can have up to 12 Trustees and to fill these positions would be incredibly proactive in building Dundee Pride as a sustainable organisation for the future, beyond our first event this month.

So tell us, what will Dundee Pride look like on the day?

We’re hoping for a lot of activity on the day. St Paul’s Cathedral is doing a refreshment stand with people to cheer on the march, and we’re open to other organisations pitching in. The development has been very organic so far but we will be engaging with the community, with local people and businesses.

After the march, a festival will take place in the city square. Joe FitzPatrick will open the festival at 1.30pm, with a programme of entertainment going through to about 8pm that evening in the city square. It’ll be a mix of local talent, bands and performers and we’ve got three headliners coming too.

We’ll have market stalls, and caterers too, but we’re trying to keep things local. Abandon Ship Apparel is doing all of our merchandising and Brew 71 have confirmed they’ll be there too.

There will be unions, charities, and local organisations that support the LGBT+ community at the festival to raise awareness of the work they do, and Dundee Rep will have a space at the theatre with LGBT+ readings. It’s important that we have smaller sub-events taking place where it’s a bit quieter so if people get overwhelmed with the crowds they can still be part of the celebrations. There’s also a youth group based at The Corner who will have a Youth Zone at the Marryat Hall with activities.

DUSA have also been very supportive. They’re the host of the official after party at 9.30pm.

How does it feel to have Dundee students involved in Dundee Pride?

It’s absolutely fantastic that the students are actively supporting Dundee Pride. I put myself forward because it’s part of the University’s strategy to be involved in the local community, and the connection with the city, so it’s my way of trying to help with that vision of the University and similarly, we had good involvement with the DUSA Exec helping us to set up Dundee Pride.

One of our postgraduate social work students is on our Board of Trustees, which is amazing. We’re open to having more students on the committee. Our skills audit tells us that we need people with backgrounds in finance, law, and volunteer management, but our ethos is also about developing our board members, so there will be opportunities for our Trustees.

What are your thoughts on LGBT+ awareness in Dundee?

Although some thought has to be given to the fact that Dundee is a small city, there isn’t really enough visibility of LGBT+ people and organisations. When I think about when I came to the University of Dundee 10 years ago, I was an openly gay man and my interview panel was very accepting, but I didn’t know any other LGBT+ staff members for several years. I knew other LGBT+ people had to be on staff, but they weren’t visibly out and therefore role models and connections weren’t accessible.

With this in mind, if you think of young people in Dundee who are trying to be themselves, having no visible role models makes this hard. Things have gotten so much better in the past 20 years but there is still homophobia that exists, so there is work to be done.

Would you feel differently if you had your interview now?

Absolutely, yes, because there’s more of a presence. The University is a Stonewall Champion, and Thomas Veit is on the University Executive Group in his role as Director of External Relations and he’s a visibly out gay man, and was featured on the One Dundee blog as a gay man. These kind of examples are so important in supporting the LGBT+ community.

The LGBT+ community as a whole is much more visible and it’s the little things that are really, really important to help the community feel secure. Otherwise people will hide themselves, and that’s difficult for an individual, they can’t be authentic or be themselves and then that drains productivity. So a visible LGBT+ community is good for people, but it’s also good for business, and the University recognises this by supporting the community in many ways.

In the city itself, there are a couple of gay bars but it doesn’t feel there is enough LGBT+ activities. I grew up in Atlanta and there was a thriving LGBT+ scene. I was on gay volleyball teams, gay country and western dancing, and gay gardening groups. There were whole range of everyday activities in which you could get together with other LGBT+ people. It was the same when I lived in South Florida. Coming to a small city like Dundee where that’s not available is a change, it’s different.

However, we hope that Dundee Pride will increase this visibility and awareness and will therefore offer the opportunity for more LGBT+ focused groups, activities and communities. Things have already started to develop in the city – for example, there’s an LGBT+ choir starting up, a group for LGBT+ people who want to be involved in political activism, so there’s something in the air which is developing change.

Actually, I was recently talking to a straight ally who was talking about an LGBT+ history here that isn’t really captured. He told me that an important political activist came from Dundee and that’s not really well known, so it’s important we share this sort of information and knowledge to show that Dundee has a history with LGBT+ people.

There is an energy and a buzz about the city anyhow just now, and part of what we want to do is just make sure that the buzz goes out to all people in Dundee, and in particular our marginalised community.

“We hope that Dundee Pride will increase this visibility and awareness and will therefore offer the opportunity for more LGBT+ focused groups, activities and communities.”

With all of this in mind, what do you think the future of Dundee looks like for the LGBT+ community?

We’re going to have a very successful event this year and continue to grow! We want to keep it local, and have our Pride be very Dundonian – it’s important that we reflect where we are. Some Prides can get really big and corporate and lose their local roots, so we really want to maintain our authenticity.

Having Abandon Ship as one of our supporters is amazing. They’re a local Dundee company that has an international reach but the brand is very Dundonian and the owner, Rich, is very keen to promote Dundee which is exactly what Dundee Pride is about.

As well as our Pride celebration, we hope to hold other activities and events. Our constitution states that we have to do two events a year (one of which is the upcoming Pride) so early in the New Year we’re planning to have an LGBT+ awards evening for the city and make it a bit of a fundraiser too. We’d like to do it for LGBT+ History Month in February, but we have to get through Pride first! This is where new members would be helpful too. And, of course, after Dundee Pride 2018 we’ll immediately start planning Dundee Pride 2019!

Sign up for Dundee Pride 2018 march – there’s no charge, registering is to give the organisers an idea of numbers.