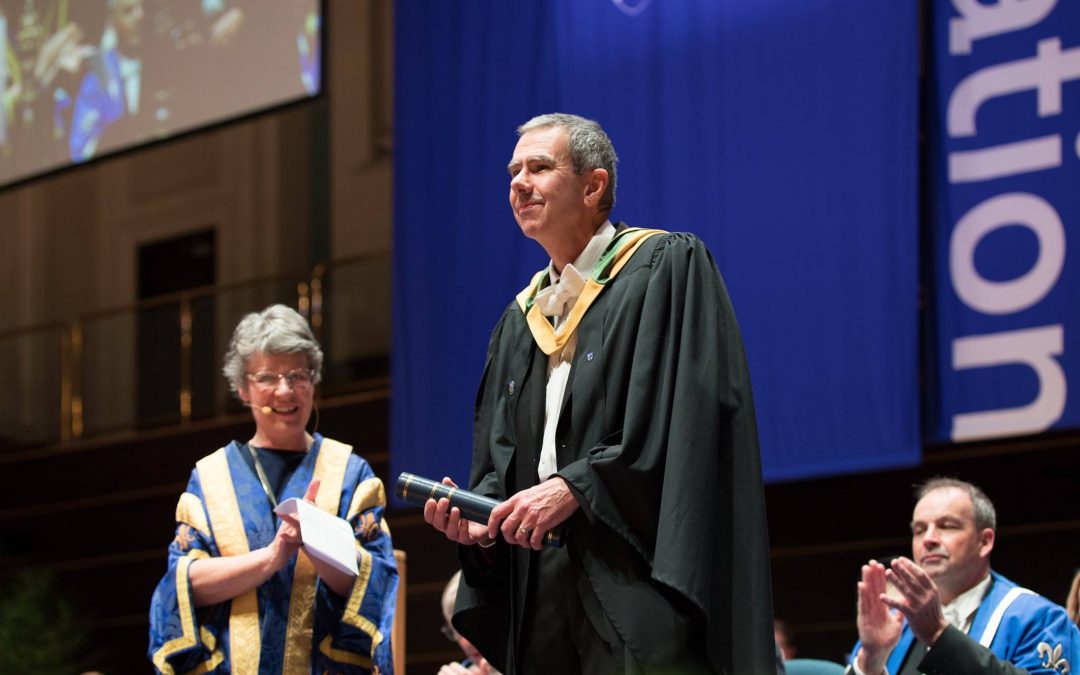 Graduation is often a time for celebrating excellence, but for John Lee, the former Head of Undergraduate Studies within the School of Nursing and Health Sciences, this year’s ceremonies were extra special as he crossed the stage to receive a Chancellors Award for Outstanding Contribution to Teaching in front of his new graduates.

John, currently on secondment working for the Scottish Government as a Professional Advisor for Nursing, Midwifery and Allied Health Professionals Education, has excelled in his career but nursing had not always been part of his grand plan.

He said, “When I went to an all-boys High School in Australia, nursing was not one of the career choices that was discussed at school. When I left High School I went into the same profession that my brother, father and grandfather had done, which was engineering. I didn’t feel like it was for me, and after six months I dropped out.”

After working in the Public Service for some time, the idea of a career in nursing was suggested to John. “This was something that no-one had ever mentioned to me before, but it sounded like something I would be interested in.”

John applied to study nursing at his local hospital who were reluctant to take him because he was a man, but John persisted. He studied in a class of around 30 students, five of which were male. He explained, “Although that is a small proportion, it is actually a larger proportion than we have in nursing in 2018.”

John found his passion for teaching other nurses and helping students to learn. After going back to university part-time, John embarked on his first teaching job in higher education, teaching science, primary care and general nursing.

“Nursing is a complex, broad-ranging, challenging profession and it requires a lot of skills. I feel that it’s important for the personality of the lecturer to come through to students, that’s what makes it a personal experience for them. I’m interacting with 400 people in a lecture theatre at a time, there are over 1000 students in our Nursing programme who are all going out in practice and making a difference. I get great satisfaction from seeing our students do well, and watch our staff help them and teach them how to make a difference.

“I’m delighted that I have received this award, it has come out of working with an excellent team. I try to bring out the best in people so we can all move forward in the same direction. I apply nursing theory, a caring compassionate, approach to the staff within the School and I think that’s as important as a caring and compassionate approach to your patients.”

Professor Lynn Kilbride, Dean of the School of Nursing and Health Sciences, said, “This award was made in recognition of the significant contribution John has made to the School and the University. John undertook one of the most challenging roles that exists in Nursing Education but this award really demonstrates how it is valued by staff and students alike.”

More than 1000 undergraduate and postgraduate students received degrees, diplomas and other qualifications at the University’s Winter Graduation ceremonies on Thursday 15 and Friday 16 November.