Step up to the challenge 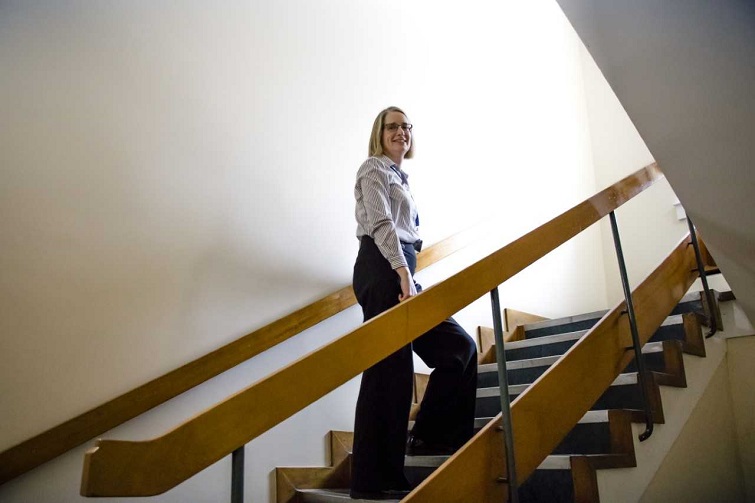 Inspired by a Discovery Days talk by the Centre for Research into Cancer Prevention and Screening earlier this month, Finance Director Carol Prokopyszyn decided to challenge herself and her colleagues to be more active during their working day. Believing that a small change could make a big difference, she began taking the stairs instead of the lift, logging 64 flights of stairs in her first week.

Now other members of her team have joined in, as have staff in other departments across the University and Carol is hoping more people will think about taking steps to improve their health.

“I was listening to the talk at Discovery Days where the winners of the Stephen Fry Award for Public Engagement said that 45% of cancers are preventable and it really made me think about what I could do to reduce the risk.

“Stairs were an obvious choice as I work in the Tower building so I decided to stop using the lift and use the stairs instead and I challenged the rest of the team to join me. In the first week I had walked up 64 floors and that was done just by going about my usual day to meetings and out to lunch.

“I thought that if one other person joined in then that would be a positive but more people have got involved. Staff in other departments have also shown an interest which is great.”

And she is hoping more people throughout the University will be inspired to take on the Challenge and become more active.

“It doesn’t have to be a lot. It’s not a sporting challenge. It is just about trying to get people moving a bit more, having a bit of fun in the process and creating community around it.”

Carol, perhaps unsurprisingly as an accountant, is logging her step climbing on an excel spreadsheet complete with graphs and targets so she has a visual reminder in the office.

“I challenged the team to add 20 floors this week and then realised that meant I had to do 84 this week! But it is already getting easier and I am feeling better for it.”