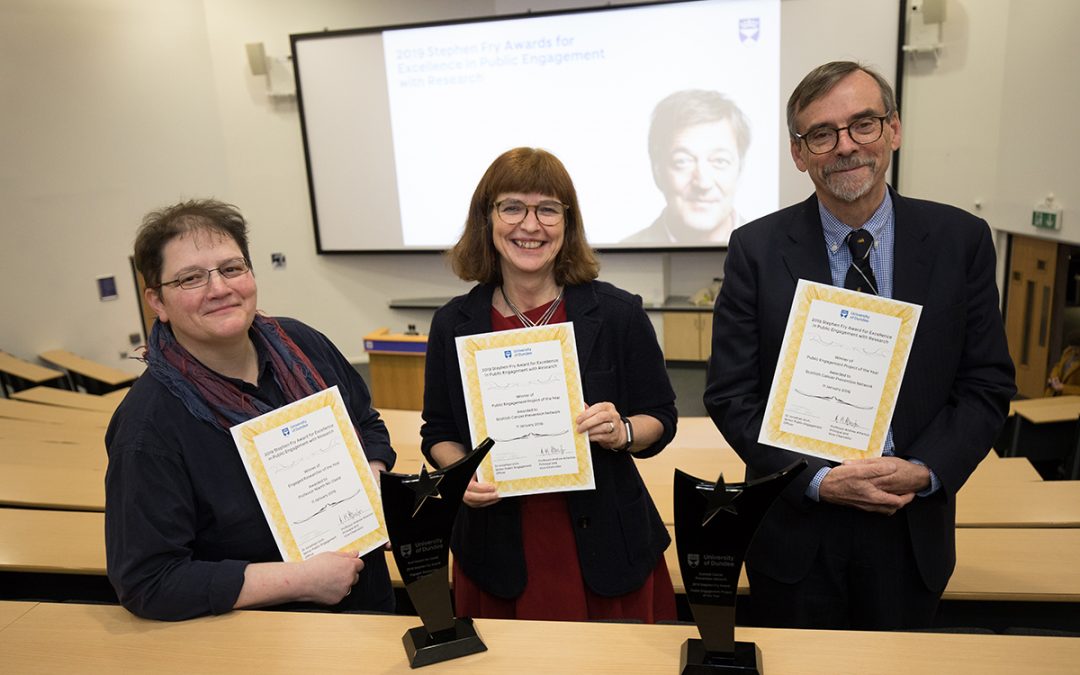 University of Dundee staff whose ground-breaking work transforms lives around the world have been hailed by former Rector Stephen Fry.

The actor, broadcaster, comedian and writer praised the winners of this year’s Stephen Fry Awards for Excellence in Public Engagement at a presentation ceremony at the University on Friday. Designed to celebrate the sharing of the world-class research carried out at Dundee, the accolades highlight the project and individual deemed to have made the greatest contribution to public engagement over the past year.

The winner of the Public Engagement Project of the Year was named as the Centre for Research into Cancer Prevention and Screening, based at the University’s School of Medicine.

Led by Professors Annie Anderson and Bob Steele, the Centre works with the public to increase awareness of cancer risk, improve understanding of cancer-related health behaviour, and highlight the importance of screening and early detection initiatives through the activities of the Scottish Cancer Prevention Network.

Professor Niamh Nic Daéid received the award for Engaged Researcher of the Year.

Praised as an outstanding communicator with global reach, Professor Nic Daéid has been heavily involved in policy development, particularly in fire scene investigation, at both national and international levels. Director of the University’s Leverhulme Research Centre for Forensic Science, her study into smoke alarms’ ability to wake children has received global recognition.

Mr Fry, who served two terms as Rector between 1992 and 1998, described Dundee as, “one of the great universities of our land” in a specially recorded audio address played at the presentation ceremony.

He said, “The University received a number of exceptional applications this year and the judging panel were very impressed by the high quality of nominations.

“All of these achievements help us to raise awareness of the University’s activities and crucially, support our efforts to transform lives locally and globally through the sharing of knowledge.”

First presented in 2012, Stephen Fry Award winners are nominated by University colleagues and students. In addition to a trophy, recipients also receive £1,500 to use towards their future communications activities. Friday’s ceremony marked the culmination of this year’s Discovery Days presentations at the University’s Dalhousie Building.

Though unable to attend this year’s presentation, Mr Fry said that he hopes to return to campus in 2020, adding, “The world knows now of the V&A Dundee museum and the extraordinary growth and exciting potential that Dundee is revealing. Dundee is now looking to be just about the coolest, hippest place in the universe, which is rather funny and wonderful for those of us who have long worshiped the old lady of the Tay.”