Congratulations to the following students and graduates who have been Highly Commended in the 2017 Undergraduate Awards, and particularly to Martha Andrews and Jordan Skrynka who were winners in their respective categories.

Professor Karl Leydecker, Vice-Principal (Learning and Teaching) said, “We are absolutely delighted that Martha and Jordan have been named as global winners in their categories. This is a fantastic achievement, alongside the other eight Dundee representatives who were highly commended. The Undergraduate Awards received over 6000 submissions from across 47 countries. It is great to see University of Dundee students named in these prestigious awards that attract entries from some of the world’s top universities.”

Martha and Jordan will receive their awards at the UA Global Summit in Dublin in November.

Her submission is called ‘Headspace: Creating A Happier Hospital’, as follows:

As the strong connection between happiness and wellbeing and good physical and mental health is being increasingly recognised the emotional strain of hospital environments is calling to be addressed.

Ninewells Hospital is a large teaching hospital in Dundee, Scotland that is internationally renowned for its innovative research projects. Whilst life-changing work is carried out in the building on a day-to-day basis, the hospital environment remains an unpleasant prospect for many whether attending as a patient, as a member of staff or as a visitor. In order to support happiness and wellbeing it is essential the hospital building reflects the amazing work going on within.

With the backing of NHS surgeon Rodney Mountain, Headspace re-imagines and re-purposes a series of rooftop and courtyard spaces that exist throughout the hospital to encourage users to take time out from the clinical environment, to connect with nature and thereby boost personal happiness and wellbeing.

The designs aim to introduce accessible nature into the hospital environment with details reflecting the patterns of the sun from the site throughout summer and winter. With influence from the Biophilic Theory of Prospect & Refuge, each space references the Scottish Bothy within three different areas of nature, connecting the hospital with the city of Dundee and surrounding environments. 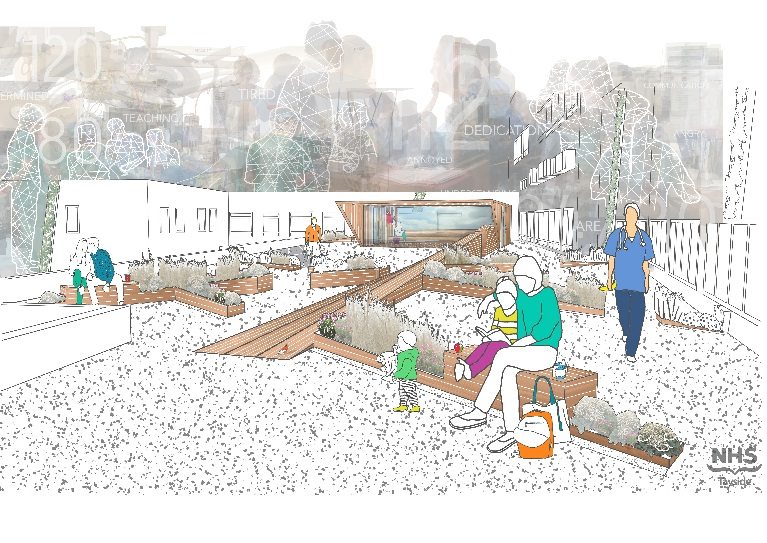 Jordan won the Psychology category, for an essay on how hunger can lead to poor decision making.

Joanne has been Highly Commended in the Visual Arts category, for a submission entitled ‘Traces’.

This project is the result of a series of explorations along the coast of Fife, where I discovered a variety of fossil fragments dating to the Carboniferous period, 330 million years ago. Locked within the surfaces of these ancient stones are traces of life no longer in existence; a captured moment rendered permanent in stone, shadows from another world. Through experimentation with delicate and ephemeral materials, contrasted with the physicality of my fossil finds, I attempt to capture the space between knowing and being, where the physical world meets our interpretation of it.

She is now studying for a Masters in Fine Art & Humanities at the University of Dundee.

Alex has been Highly Commended in the Life Sciences category for a literature review entitled ‘Does Management of Acromioclavicular Joint Injuries Correspond with Anatomical Principles?’

He reviewed the current literature on the anatomy of the joint and considered how the surgically reconstructed joint differed, which he completed with Professor Wilkinson during his intercalated year BMSc (Hons) Anatomy. Since then he has returned to Medicine, and is just starting final year.

Ruby has been Highly Commended in the Philosophy category.

Her submission was called ‘The Walls of Our Cage: A Critical Investigation into the Role of Limits and Restrictions in Tractatus Logico-Philosophicus and Philosophical Investigations’. This was an essay looking for a common thread or theme through the main works of Wittgenstein.

She edited and submitted her essay while on a semester abroad at the Australian National University in Canberra, and was also a recipient of a Carnegie Trust Vacation Scholarship.

David has been Highly Commended in the Life Sciences category.

Michaela has been Highly Commended in the Life Sciences category.

Her submission was her honours thesis, conducted under the supervision of Professor Sonia Rocha, titled FAM60A is a novel D-glucose and serum responsive hypoxia regulator in HepG2 cells.

Michaela is originally from Slovakia and is now doing a Wellcome Trust funded PhD.

Maxim has been Highly Commended in the Life Sciences category, he is now doing a Wellcome Trust funded PhD.

For his final year research project, he characterised unique mutations of an oncoprotein, derived from relapsed patients with refractory acute promyelocytic leukaemia. The aim of his project was to understand why certain patients,harbouring these rare mutations, were resistant to arsenic trioxide as the treatment.

Daniel has been Highly Commended in the Politics & International Relations category.

The title is his essay was ‘What does it mean for human rights to be “universal”?’, and it examined the key debates on and differing perspectives of the universality of human rights. The arguments of an array of different authors were broken down and placed into four broad approaches to this question: Absolute Universality, Cultural Relativism, Practical Universality and Retaliative Universality. The essay aimed to evaluate these approaches, and conclude which approach was most convincing.

Sarah has been Highly Commended for two pieces of work in the Literature category.

Her submissions were entitled ‘A Scottish Epic?: Scotland and Scottish Culture in James Macpherson’s Ossian and Robert Burns’s ‘Tam O’ Shanter’’ and ‘Abolitionist Rhetoric: Narrative Voice, Race, and Slavery in Frederick Douglass’s Narrative of the Life of Frederick Douglass, an American Slave and Harriet Beecher Stowe’s Uncle Tom’s Cabin; or, Life Among the Lowly‘.

The aim of the first was to explore the different ways in which Scottish nationalism was approached in the aftermath of the politically fractious Acts of Union 1707, in which it appeared that Scottish cultural identity was under threat. By referring to issues such as authenticity, setting, language, sentimentality and Romanticism, I highlighted how writers James Macpherson and Robert Burns used epic poetry (here defined as a celebratory poem of national heritage and heroism) to exalt Scottish identity. The two writers, as I conclude, approached the issue in very different ways, with Macpherson creating a sentimental and defeatist image of Scotland according to Anglocentric values of nobility, whereas Burns rejects such notions of exoticism and glorification, instead creating and celebrating a more authentic image of rural Scottish communities.

My second essay highlights the importance of literature in political change, through the example of the Abolition movement in mid-nineteenth century USA. By influencing the minds of Americans, in the North and South, Stowe’s Uncle Tom’s Cabin and Douglass’s Narrative incited real action for the Abolitionist cause, and therefore played a fundamental role in the eventual abolition of slavery in 1865. However, the rhetorical approaches by each writer again differed greatly, with Douglass’s masculine and empowering stance contrasted by Stowe’s somewhat problematic maternalistic and sentimental depictions of the plight of black slaves. By exploring elements of both narratives such as narrative voice, depictions of race, and the writers’ identification of the fundamental issues inherent to slavery, this essay presents two very different images of both the abolitionist movement and of race relations in the United States, an issue that is of the highest pertinence to ways in which we perceive American history and nineteenth century political literature.

Sarah is now studying for a Masters in English Studies at the University of Dundee.