Community Resilience – Why should police be involved? 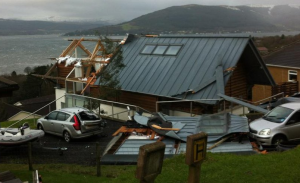 Day 5…no electricity, no food, no money, no fuel, no mobiles or landlines – a desperate situation. This was the crisis the islanders on Bute found themselves in January 2012.   Resulting lessons learnt identified a need for Argyll & Bute Council and their partners to improve its own resilience in weather related emergencies, but also to ensure that our communities and the individuals within them are better prepared for severe weather.  With the council leading on a project with our other category 1 and 2 responders and the third sector, a handbook was created to enable communities to create their own community emergency plans. These plans allowed them to work alongside the statutory agencies in low-risk activities to enable a quick return to normality.

Police Scotland was at the forefront of promoting this project at Community Councils, providing assistance, advice and encouragement to communities looking to create their own plans. These plans came into fruition in the snow storm which affected Kintyre in March 2013: twenty foot snow drifts closed the only road and electricity was off for nearly a week. To date, 76% of community councils in Argyll & Bute are in the process of creating plans, with 23% completed. The project is heralded by the Scottish Government as an example of best practice and was recently showcased at the Scottish Government’s Voluntary Sector and Community Resilience Seminar.

It may be an obvious question, but why should the Police want to get so heavily involved with such a project?

Building community resilience has many benefits for the Police not just in dealing with weather related incidents. Having an identifiable and available additional community resource not only strengthens the bonds with the community but improves the potential response and recovery capabilities.

Police Scotland recognised that the diverse and isolated communities in Argyll and Bute need to be as self reliant as possible. If anything, this project was about formulating plans which traditionally fell into place. Having a formal plan allows the police to fulfil their coordinating role in the response phase of an emergency.

The project has ended but the mission to build community resilience continues. The Local Resilience Partnership (LRP) for Argyll and Bute is driving this forward as a standing agenda item. Exercising plans soon will become business as usual, governed by the LRP embedding the plans and again strengthening links with the community.

So what’s next? There are plans to develop business resilience in conjunction with community resilience plans, further enhancing the community’s ability to support itself. Police Scotland will be there all the way to help in whatever way they can.