The proliferation of legal highs in Edinburgh – a partnership response 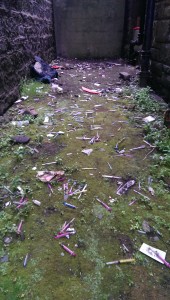 Written by Neil Wilson, Police Scotland.  Neil presented at the SIPR Conference in November as part of our “Policing Vulnerable People and Vulnerable Places” Conference, and at our invitation has written this report on Edinburgh’s initiative:

The term ‘legal high’ is a particularly unhelpful one, having been coined by the pioneers of what is now a multi-million pound industry, it serves to infer an air of regulation, safety and legitimacy to unsuspecting and uninformed consumers who have little or no understanding of the associated risks and harms.

Simply put, ‘legal highs’ or New Psychoactive Substances (NPS) are chemicals designed to mimic the effects of controlled substances. No evidence base exists for the medium to long-term effects of these substances and it would be entirely disingenuous to suggest they are any less damaging than their illicit counterparts.

Few countries are untouched by the issues associated with NPS and bespoke legislation has been brought to bear to in Ireland and elsewhere.1 In the UK, the Psychoactive Substances Bill recently received Royal Assent and will become law later this year, banning the manufacture, import, export, sale and distribution of all psychoactive substances.2

Edinburgh has been disproportionately affected by the proliferation NPS resulting in a variety of harms and negative societal impacts. A survey of various stakeholders revealed that use differed markedly from national trends with a propensity for users to choose intravenous administration.

Injecting practices differed from conventional substance of abuse, with users reporting a compelling urge to re-dose, with some individuals injecting up to 30 times daily. Practices such as communal injecting, sharing of needles and users injecting each other became commonplace. Due to the frequency of injection and the corrosive nature of the substance being injected, users quickly found their veins became unviable leading to high risk injecting in the neck and groin.

The health implications for users were stark and ranged from systemic bacterial infections and transmission of blood borne viruses to deep vein thrombosis, hyperpyrexia and rapid weight loss. Mental health issues associated with use were also profoundly damaging and included severe paranoia, psychosis and persecutory delusions.

Whilst intravenous use of NPS represented the most extreme and concerning aspect of abuse and generally occurred within a cohort of habitual drug users, it was apparent use was becoming more mainstream with the synthetic cannabinoid class of NPS gaining particular popularity with young people.

A poll of 200 14-15 year-olds from the city’s secondary schools revealed 58% knew people who had used ‘legal highs’ and 26% had used such substances themselves. Furthermore, a survey of children in looked after care highlighted that NPS use was widespread, impacting on some of the most vulnerable in society and placing them at risk of exploitation whilst under the influence. Anecdotal evidence also indicated a proportion of the city’s student population abused such substances.

The growing popularity of NPS correlated with low cost and ease of accessibility, coupled with the misguided belief that ‘legality’ and over-the-counter availability conferred some degree of quality assurance, regulation and product safety.

NPS damaged Edinburgh’s communities in various ways; needle discards presented a health risk, antisocial behaviour in the vicinity of head shops became entrenched and overt injecting was often witnessed by members of the public. Individuals under the influence were generally unaware of their actions and frequently placed themselves in harm’s way. The substances impacted on policing on a daily basis, often placing officers in challenging and dangerous situations. It also resulted in users, who wouldn’t normally exhibit violent tendencies or commit crime, finding themselves in custody as a result of their actions whilst under the influence. Set against this toxic backdrop, the escalating cost to the public purse of the consequences of abuse further reinforced the negative impact on society.

A partnership approach was instrumental in gaining a greater understanding of the problem and oriented multiple organisations to deliver common goals. A dual stranded enforcement strategy was undertaken to address the unfettered supply of NPS on the high street. Evidence of the health harms and societal impacts was presented to the Advisory Council on the Misuse of Drugs, ultimately resulting in the introduction of Temporary Class Drug Orders covering the most commonly injected substances.3,4 In tandem, a case was prepared under the General Product Safety Regulations 2005, resulting in all NPS retailers in the city ceasing trade in the substances.5 Constraining supply had significant benefits; public space needle discards and hospital admissions decreased dramatically and the entrenched antisocial behaviour which had blighted communities across the city disappeared almost overnight. Furthermore, it enabled users to reflect on their abuse and recognise the risk and harm, with many viewing the ban as a catalyst for coming off NPS altogether.

Whilst enforcement action was successful in addressing the damage caused by NPS, both to the individual and at the societal level, it is recognised that it is not the definitive answer. Continuing efforts in terms of education and support and treatment for users of NPS are essential to ensure a sustainable reduction is achieved.

The photo was taken within a church yard in Edinburgh, by PC Matt Morano on 9th September 2015 and illustrates the issue of discarded injecting kits.