For all you new freshers out there, you now just have over a month left before heading to Dundee! That’s exciting isn’t it? However I can completely understand if this is a bit overwhelming too… I remember this time last year I was going a bit crazy, as there was just so much to do! From applying for accommodation, paying tuition fees, obtaining CAS letters for visas, getting appointments at the embassy and the list could just keep going on. However out of all of these things the one that stressed me out the most was PACKING! Leaving home for a whole year for the very first time I literally wanted to take everything and anything I ever owned. But… due to me being an international student I was only permitted 2 suitcases of 23kg! That’s it, two suitcases to take all the things I ever owned (okay, okay, I shouldn’t be complaining because I had a friend who was only allowed 1 suitcase, but still!)

Next came the time to make the decision as to what to pack? And if there wasn’t already a space restriction that I had to deal with, I also had to deal with my mother who had other ideas on what I should take… It almost be 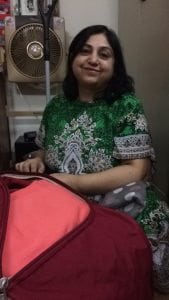 came like the ultimate pack off in which my mom and I were competing. She would emphasise more on the food aspect of things because for one she is a mother and two she is Punjabi, and if you haven’t met a Punjabi before you should know that for them food is priority always! Whereas for me I wanted to take as many clothes and shoes as I could. In the end we came to a conclusion that she could have one suitcase and put whatever she wanted in it and I would have one for my needs.

So what did I end up taking? I stocked up on a lot of sweaters, scarfs, gloves beanies, jeans, full-sleeved shirts, boots (especially ones which prevent you from slipping as I have fallen down so many times) and some clothes for going out (i.e. dresses, pretty tops, heels). Don’t worry if you can’t carry a lot because Dundee has plenty of shops that can cater to your needs (there are good student discounts too so don’t forget to take your student ID). I would highly recommend that you also stock up on a lot of undergarments because trust me that will save you on washing! Along with that I would also invest in a trench coat (when the temperature isn’t too cold) and a good winter coat preferably with a hood and is water proof because for the majority of the year it is either raining or is super windy in Dundee.

I would also recommend carrying something that reminds you of home like pictures, teddy bears, and posters as it makes your room look a bit more personalised and homely as student halls can be quite bare otherwise. Furthermore my mother made me carry loads of Indian spices, ready to eat Indian meals, cutlery, a frying pan, a saucepan, Tupperware containers, knives, glasses, mugs a rice cooker, a pressure cooker, and a toastie maker (well at least the toastie maker made me everyone’s best friend…) To be honest all of these things can be bought when you reach Dundee from shops like Tesco, Lidl, Primark and etc. You also have many Asians stores for spices like Global and Matthews, and Tesco themselves 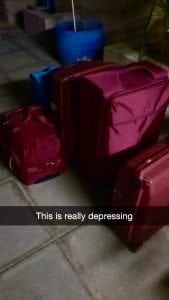 have an international section too. But if you have a mother like mine who is quite concerned about the food aspect of things be ready to come with a whole suitcase of food and kitchen utensils.

Other things that I would suggest you should either pack with you or buy when you get to Dundee is firstly invest in a doorstopper. Having a doorstopper gives an impression that you are friendly and helps in the social aspect of things in the first few weeks of university. Furthermore, have a personal first aid kit with plenty of band-aids, muscle relaxers, painkillers, paracetamols, and burn spray (trust me I burnt myself a lot when I initially started cooking). As well as that, having a couple of sets of bedding reduces the stress for washing (again I only had one so washing my sheets every week became a bit annoying). In addition to that, a laundry basket is ideal for transporting your laundry to and from the laundry machines and keeping your room tidy as all the dirty clothes are in one place. An extension cable can be handy too!

Apart from that remember you will always be sharing things with your flat mates and you can see other things you feel you need when you get to Dundee rather than trying to take everything from home. Happy packing everyone!