Saturday the 31st of August 2013 was the day I made The Big Move- a day which many of you may be experiencing this weekend.  I actually don’t remember much from the actual day which is a little sad as it’s probably one of the most important days of my life so far.

I do remember the lead up to it- coming from Glasgow, I applied for student halls for my first year and I was given my first choice of Belmont.  I remember there was a Facebook page where you could try and find your future flatmates on before the big day simply by posting “Flat 48?” and hoping there wasn’t an influx of weirdos claiming to be living with you for the next year.  I spoke with all of my flatmates through this page before we all headed to Dundee, and did a significant amount of Facebook stalking with the limited information provided- “oh he’s English”, “oh she went to boarding school”, tidbits of information that allowed me to form a weird picture in my mind of them all before being proved completely wrong upon arrival.

Packing for me was a last minute rush, which I definitely would not recommend, and to be perfectly honest my room back home in Glasgow still contains quite a large amount of my stuff (which I clearly haven’t needed in these three years).  A trip to IKEA (always very exciting) provided me with most of the essentials- cheap cutlery, plates, utensils etc- though I would say don’t go over the top.  There’s only so many pizza cutters that one flat needs and you definitely do not need a full set of crockery, this will only encourage you not to clean your dishes straight away which will definitely not help in your flatmate bonding quest.  Lots of glasses are always handy as pre-drinks aren’t really the time to be standing over the kitchen sink and I had a habit of taking my drink with me to other flats and then leaving them there.

Back to the actual move in day- it was a full family affair for me.  My Papa drove one of my brothers and I, and a car full of my stuff, up to Dundee (which took just about an hour and twenty) while my Mum, my Nana and my two other brothers took the train and met us there.  We unloaded my stuff, went to Tesco for a food shop and then they left (rather abruptly) me there to get on with my new life.  I was quite early in the day and only one of my other flatmates was there already and was in his room (he’s still 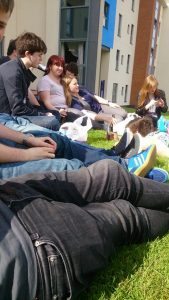 very anti-social when he wants to be, but going into year four I’m still living with him and have learned not to take this personally) and so I sat in my room and wondered what the hell I was supposed to do now.  I unpacked for an hour or two before another flatmate knocked on my door and we all ventured to congregate in our new living room/kitchen where the ice was very firmly broken very quickly.

I was very lucky in that I met all of my best friends during this time living in halls- our whole block was very sociable and got on well with each other.  All special occasions- 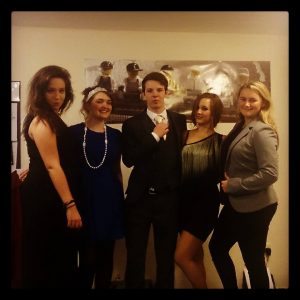 birthdays, halloween, a pre-Christmas dinner, were all spent with each other and I still refer to my group as my Dundee family.  That year in halls was the best time of my life, but a year was definitel 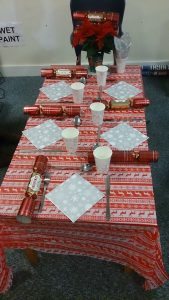 y enough for me! It’s intense and something you probably can’t prepare yourself for fully but I remember feeling completely at ease as soon as I was there.  Dundee campus is like a wee village in the middle of the city and everyone knows everyone else.  I definitely would recommend moving into halls for first year if possible as this way you never need to worry about making friends- you automatically have a bunch already thrown into the deep end with you together and then as the year goes on you get to know everyone else and form your own groups.  Was definitely the best decision I’ve ever made.

Relax, make sure you’ve got the important stuff, and be open to meeting new people and doing new things.  Leaving your door open is a good way of not seeming closed off and unapproachable, and try to do things together as a group.  We drank together, went to the Freshers Fair together and even did a flat shop where we picked up stuff like a plant and ingredients for baking a cake.  First year is there to be enjoyed! But it’s also good to have people to walk to class with as well. 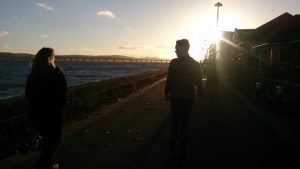