Oor Wullie! Your Wullie! A’Body’s Wullie! And for the summer, he was indeed. Over the course of July and August, Dundonians bore witness to their beloved cartoon laddie – Oor Wullie (or “Our William” if you’re from the Ferry) incarnate as fifty-five sculptures painted in bright colours and scattered around the city. This was “The Bucket Trail”.

Oor Wullie’s creator, DC Thompson, Wild in Art, and The Archie Foundation collaborated with a variety of artists and sponsors to decorate the statues of the cheeky chap sitting on his infamous bucket. Each design harbours some significance to Dundee and the wider Scotland, and each of these will be auctioned off on the 17th September to raise funds for a twin operating theatre paediatric surgical suite in Tayside Children’s Hospital. The Wullies have now been removed from the streets, but fear not, for I shall now give you an overview of all things Dundonian in a matter of Wullies. A Dundonian born and bred, I set off on the bucket trail myself only to find it so vast that I only managed to visit twenty of the Wullies; to cover each and every one would require a novel, so for now, we shall look at five.

The first Wullie in our very own trail is ‘Dun Deagh and the Five Glens’, sat atop the Dundee Law, with the rolling hills of Dundee’s surrounding countryside stretched out across its surface. Perhaps one of Dundee’s most iconic features, the Dundee Law is an extinct prehistoric volcano that, once scaled, yields incredible views from Menziehill to Broughty Ferry, and the Sidlaw Hills to Fife. Though little to the knowledge of Dundonians of days gone by, the Law’s previously destructive nature lives on in the very meaning of the name Dundee: Fort of Fire. The Law is a must see for anyone new to the city, however, a word of caution: never call the Dundee Law “The Law Hill” – Law is Scots for hill and doing so will be met with all sorts of disgruntled expressions. 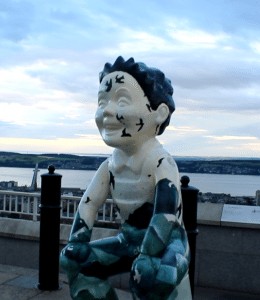 If you were to take a wander into town and into the city square, you’d find ‘Oor Ideas’ tucked in the corner by the Caird Hall. It is plastered with various images that hark back to ideas that are rooted within Dundee’s seven gates. Among these images are the lightbulb, Frankenstein, Lemmings, Dundee Comics, Dundee Marmalade, the radio, and aspirin, each emblazoned on their own postage stamp – which, you guessed it, we also invented. While you are here you can be certain you are surrounded by invention and innovation. 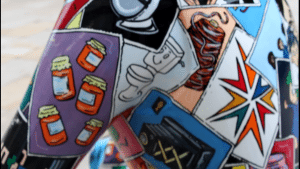 ‘Discovery Bridge’, at Marine Park Walk pays tribute to Dundee’s two bridges, arguably the most iconic images associated with the city, second to The Law. Both bridges span the Silvery Tay, the longest river in Scotland and biggest in the UK by discharge. If you were to take a day out in Fife, you would cross the 1.4-mile-long road bridge, one of the longest in Europe. And for a trip to Edinburgh, you would cross the Tay via the rail bridge – the second of its name. The first rail bridge fell victim to a storm in December 1879, a segment collapsing in the Tay Bridge Disaster. The bridge was rebuilt, however crossing the new edition proves to be an unsettling experience when you spot the stumps from the previous bridge sticking out of the water.

Dundee’s waterfront offers a harbour that a couple of hundred years ago, would be taking Dundee’s three J’s – Jute, Jam, and Journalism, to every corner of the globe and lifting Dundee to a nationwide status second to only Edinburgh in terms of prosperity. These days, you will find Captain Falcon Scott’s Discovery ship nestled in the ongoing waterfront renovations. The construction does not make for the finest view, however, all will be worth it when we get our very own Victoria and Albert art museum – fitting for a city so grasped by the spirit of creativity. The Wullie to be found here during the trail would have been ‘Oor Wai ‘o’ Spikin’’, peppered with Dundonian and Scottish slang. The phrase “Twa Forfar bridies, a plen ane an an ingin ane an a” may indeed sound like gibberish, but to ears tuned in, it is a message of profound meaning – to the baker at least. 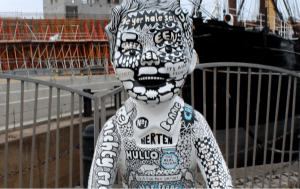 Lastly, it’s hard to come to Dundee without hearing about the three J’s: Jute Jam, and Journalism, and this is exactly what our last Wullie is dedicated to. Dundee’s three main trades boomed during the industrial revolution: DC Thompsons producing newspapers like the Courier and cartoon characters like The Broons, and of course Oor Wullie. Famous Dundee Orange Marmalade also finds a home here, and we are also a city of mills. The jute industry found its peak during the war years, producing sand bags from mills such as Cox’s Stack in Lochee and Verdant Works. As time marched on, each J started to dwindle until the only one still in major production is journalism. However, Dundee has certainly adapted to the modern world, booming in two new industries: gaming and higher education, even giving some of the jute mills a second life as student accommodation and art studios.

Though the Wullies are gone, the map for the Bucket Trail can still be found on the Bucket Trail website, along with pictures and information about each of the Wullies. I have certainly not been able to cover all of Dundee’s vibrant culture, but who knows, the Bucket Trail minus the buckets may indeed be the history lesson you were looking for!