The past couple of weeks have flown in, with classes gearing up to coursework due dates and a few sociable nights- including a three-day 21st birthday celebration.

Nearly a fortnight ago, the Humanities Society here at UoD played host to a Family Ties event where a couple of Third or Fourth Year students acted as ‘parents’ to one or more First or Second Year students.  Many schools and societies have a very similar event around this time of year and then later the younger students will host a ‘revenge night’ for their ‘parents’.  Although largely an opportunity to drink, go out and have fun, such events are a great way of meeting students from other years (which doesn’t happen too often) and for the younger ones to get some advice, be shown the good places about town and feel more welcome!  Two of my flatmates were given a ‘child’ who spent the night socialising in our flat before heading out to a local club where they were able to meet up with other ‘families’.  Some went for a fancy dress theme within their family, some were not so keen on the drinking aspect and found other ways to socialise.  Be sure to be on the lookout for these kind of events within your particular school, they’re often referred to as Gaudie Nights!

Also that week was the Car Park Rave Headphone Disco (a lot of socialising for me in one week!) which has been a staple night here for a number of years now.  Basically, thousands of students take to a giant car park where you are given headphones and the ability to tune into what music you prefer.  Makes a change from the usual club nights, though a carpark in Dundee in October at 3am is really pretty cold!  As we are in our final year, my flatmates and I had a lot of fun enjoying these traditions while we can! 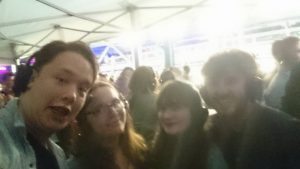