A Day in the Life of an English Student

Thought I would give you all an insight into what a typical day is like for me in my final year of my English degree.  This semester, Fridays are my busiest days with five hours of classes.  I actually only have one other hour a week on a Monday but thankfully this means I have (sometimes) plenty of time to do all my reading and preparation- this is normally at least one primary text for each module, as well as secondary reading on these texts and sometimes questions to answer for tutorials.  This week happened to be a very busy week for me, as typically week 7 of the semester is for us Humanities lot, as last week was a ‘Reading Week’ meaning no classes and time to catch up (in theory).

So for today I had two essays due and a group presentation to perform- easy right?! So really all day I was counting down the hours for my week to be over, though normally I really enjoy my Fridays!

I started the day by getting up just before 8, a lot of rushing around ensued as I had to make sure to get to the library and print one of my essays off before my Modern Drama and Performance class at 9.  It was quite a cold, Autumnal morning though, in true Dundee fashion, it actually turned out to be deceptively warm in the sun and I was
roasting by the time I made it up the hill to Dalhousie building (with a  quick stop off at the library).  My Modern Drama and Performance module consists of a three hour class in the Drama Theatre- although thankfully there is no acting involved! I’ve included a 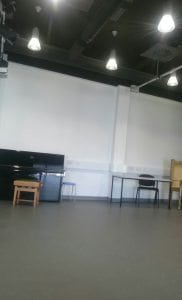 sneaky picture I took in class today, but it doesn’t really do it justice- it’s a largish room, with lighting and a projector, a piano against the wall and a few random props, but it’s nice to talk about drama in a room where you can actually envisage it taking place.  This was where our group presentation was to be performed.  Myself, one of my flatmates and another girl were presenting on The National Theatre- its goals, the people involved in its creation, its notable performances and its legacy today.  Other presentations were on Theatre Workshop, Brecht and theRoyal Court Theatre.  All in this took up around an hour and, after a short break, the rest of our time was dedicated to our play of the week- ‘Rosencratz and Guildenstern are Dead’ by Tom Stoppard.  We spoke about absurdist theatre, what makes a tragedy, and how Stoppard turns Shakespeare’s ‘Hamlet’ on its head.  We also watched and interpreted a small section of the film adaptation of the play.  I really enjoy this class and the more experimental texts that we have covered- makes a change from many people’s initial perceptions of drama and theatre.

After this, I braved the cold back to my flat to make some food and prepare for my next class.  I still had my second essay of the week to submit online so I took this time to look over it, redo my conclusion and finally upload it.  I then had a bit of time to spare to look over the q 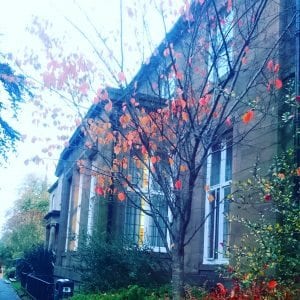 uestions my tutor had emailed us for this afternoon’s class before packing my bag and setting off back to campus.

My second module is The Novels of Virginia Woolf: Feminism and Modernism which I also love.  There are normally only around five of us in the Friday class so we get a lot of good, productive discussion going.  The smaller classes make the subject a lot more enjoyable and relaxed- it’s easier, in my opinion, to talk openly in front of less people!  Even when I was studying other subjects in my First and Second Years, I always felt
most comfortable contributing openly in English seminars.  Our tutors are really good at asking open ended questions and proposing ideas for us to bounce off of each other, and there are very few wrong interpretations of texts if you can back it up! This weeks texts were Woolf’s To The Lighthouse and Lappin and Lapinova.  Most of our discussion centred on the representations of marriage in each, as well as some of the experimental, modernist aspects of the works.  Although, our lecture on Monday did include discussion on the small boy wishing to kill his Father and marry his Mother- a typical day in the life of an English student then!

After two hours of this I was done! Two essays, a presentation and five hours of discussion later I was free to enjoy my Friday night.  I would love to say that I celebrated like a true student and had a night of drinking, dancing and fun but actually I ate cake, caught up with all the trashy TV I’d been missing in my essay-writing-bubble and cosied up in my bed with blankets and pillows- very typically of any Fourth Year Student I think!

If you have any questions about studying English at all, then please leave a comment and I’ll get back to you!