Welcome back to Dundee guys! How you all had a great festive season! My break was great! I got to go back home and even spent a week in Sri Lanka. Ahh, how I miss the warmth and sunlight! But to be fair, I was very happy to come back to Dundee, all refreshed and ready to start a new semester – New Year New Me. Hope you guys haven’t given up on your now year resolution  yet! 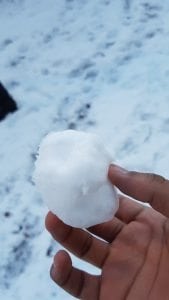 One of the best things that have happened this semester so far, though it may be a surprise to many, was the snow! I know I have complaining a lot about the weather in Dundee, don’t get me wrong it is still cold. But that faithful day when the snow starting falling, my god….was it beautiful! To be honest it was the first time I ever saw snow in my whole life! I have been to cold countries before but never actually seen or felt snow. And the first week I was in Dundee, it snowed! (what are the odds!) Many of friends were kind of confused on why I was so happy and surprised to see snow, neither did I. It might have been the fact that the only other time I have seen something equivalent to snow was when I went to SnowCity in Singapore, a place where they artificially lower the temperature and crush ice to mimic snow. It might seem bad, trust me it is actually worse.

But on the day it snowed (13th January), I was so glad I had a short day. I came back to my room as soon as possible
and called a few of my Singaporean buddies to, don’t judge me, play with the snow! We had so much fun! We met near the tennis courts where there is a huge green patch, at least used to be there, that day it was covered with a couple of inches of snow. We started throwing snowballs at each other; all of a sudden we were 7 again. The level of ecstasy we were feeling was describable in words. Then we went to make our very first snowman! I mean, that is something I had to do…like…it was not even an option for me. We started foraging for stuff nearby and made the cutest snowwoman (still don’t know how a snowman turned into a snowwoman) ever!

Well, it might have been hard for many to come back to Dundee to study especially my fellow international students, but I feel it one of the things we have all decided to sacrifice for what we want to do with our lives. I too was pretty sad and down the first few days when I was back in Dundee, especially when I was sitting through 4 hours of mind numbing tedious lectures a day! Not that I am complaining, I knew what I signed up for but still… I really do take it as a blessing that snow fell on Friday to reward me for getting through the first week of semester 2 of Medical School. I hope you all find your snow that makes you happy to get you going for the coming weeks and year! Once again, have a great semester!