Another Week, Another Adventure

Hello again!  Since my last post I have been pretty busy and there has been a lot going on.  I had a great time at a 21st birthday party for a work friend and fellow Dundee Uni student and I also received an offer of acceptance onto the Postgrad Masters course I had applied for!!  Feeling very relieved and motivated now that I have a little bit of stability and certainty for life post-undergrad.  Also had a great class this week, focusing on feminist and minority publishing houses.  Very interesting and had great discussion within the group I was working with- really loving these Monday evening classes.

However, the focus of this post is on yet another day trip around Scotland (as I’ve said before, Dundee is ideally located for exploring loads of different places- whether historical landmarks or just a change of scenery).  I had reached that stage of the semester where I was already starting to feel a tad overwhelmed- dissertation research will do that to you!- and was actually on holiday from work, so made the most of my time off by hopping on a train to Perth.  If you’ve been keeping up with my posts then you may know already that my boyfriend grew up in Perth so this wasn’t my first time visiting and we didn’t really have nay particular plans for the day (bar avoiding responsibilities).  We did, however, have a really lovely day and uncovered a few hidden gems.

First off was this super cute vintage tearoom where I had the most amazing carrot cake I have ever had (or that potentially exists) and drank from the prettiest china teacups.  The place was called Small Talk Traditional Tearoom so be sure to look out for it if you visit.  My boyfriend braved the cullen skink (a Scottish fish soup) which he loved but I stuck to cake!  The tables are also covered in old photos of Perth and postcards and letters sent back from the First World War, so it was also a beautiful, historical place to visit.

We then spent a bit of time in the museum and art gallery which is situated in the centre of town.  There was an exhibition, which proved very interesting, called Art of War which featured paintings, photographs and sculptures influenced by wars spanning the past 160 years.  Some of these were artworks by former soldiers, others from designated War artists or photographers.  Was a lovely and very thought-provoking exhibition which I’m glad we were able to see. 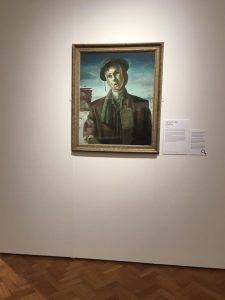 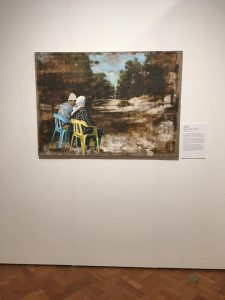 After this we spent a bit of time wandering the many interesting shops of Perth- many of the usual high-street stores (it is a city after all) but also a lot of cute, independent and unusual boutiques.  I particularly liked this deli that we visited- offered a lot of exotic and artisan foods and the smell was amazing. 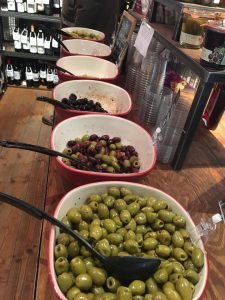 After dinner at an Italian restaurant, we walked along the river to find a light show similar to the Enchanted Forest that we visited in Pitlochry a few months back (there’s also a blog post on this from around November time).  This was an unexpectedly beautiful end to our day- the lights reflected on the water and created a lovely atmosphere to walk around and enjoy. 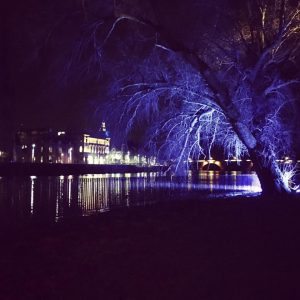 So there you have it! An insight into how I procrastinate and explore Scotland during my final semester.  Be sure to visit Perth while you are here if you have not done so already- it’s a 20 minute train ride away and offers a great alternative when you need to escape your desk and four walls and you feel like you’ve had enough of Dundee for the time being.  (Also try the carrot cake! 🙂 )