Dundee is a city of dragons. It may not seem so, after all we are not known as “Dundee – The Misty Mountain” but rather “One City, Many Discoveries” – a tagline adopted from the historic ship in our silvery waters. Indeed, many discoveries have been made within our ghostly city walls, but none so great as the Dundee Dragon.

At the top of Dundee’s Murraygate lurks a green, scaly beast, ready to snap up the unsuspecting shopper. The dragon is one of Dundee’s most notable sites, and is unlikely to be missed. However, if you were to look closer, you’d find him not to be Dundee’s only dragon. Look to your right as you face the Caird Hall, and you will find the City Chambers, proudly bearing Dundee’s own coat of arms, with two notable dragons; the same crest can be found on the front of the Caird Hall itself. Another sneaky dragon to lurk in Dundee can be found atop the spire at St. Andrews church, just by the Wellgate shopping center: caught in permanent flight, perhaps fleeing some great hero or keeping a vigilant watch over the people of its city. So why the obsession with dragons? For this answer, we must look to a quiet field just past Bridgefoot, near the foot of Craigowl Hill where, surrounded by a protective fence, a 6th-7th century Pictish stone bears the tale of Martin and the Dundee Dragon. Though much of the stone’s surface has been weathered by the years, one can still discern the shape of a large wyrm, and a man on horseback.

There was once a humble farmer who lived with his nine beautiful daughters at Pitempton. One morning, as he would most mornings, he sent the eldest to fetch water from the well, and when she did not return for quite some time he assumed she must have sneaked off to enjoy the summer afternoon, or perhaps meet with her lover in the nearby village. However, as midday drew near and she still had not returned, he grew concerned and sent another of his daughters out to find her. Time passed slowly until at last evening loomed in the air and still, there was no sign of either of the two young women. Dusk inching hauntingly closer, the farmer sent daughter after daughter to search for his missing children, but once they left the safe abode of home, they did not return. By the time midnight struck, the farmer found himself alone before the fire, gazing at the horizon for any sign of nine skirts and nine buckets, and when at last he could take the waiting no longer, the elderly man – with much effort – pushed himself to his feet and ventured into the night with nothing more than the cloak on his back and a lantern clutched between shrivelled, shivering fingers. He searched through the night, far beyond the well towards Strathmartine and as the morning star lit the sky and the world was washed in a light pink from the east, the farmer found his daughters. Though not as he would have liked. There in a nest of coal and timber, crammed in the hollow between two hills, was a ferocious, sleeping dragon. His lair was scattered with bones and fresh blood stained the tooth that peered through his lips. The farmer was horrified to count nine skulls among the carnage, and without so much as a squeak, he fled for the nearest town to find someone to slay the dragon and take vengeance on his devoured daughters. It just so happened that among the residents of that town was the lover of his eldest daughter: a fair and strong lad named Martin. In rage at the bleak news the farmer brought, Martin did not hesitate in saddling his plucky mare and galloping straight to the dragon’s lair with his sharpest spear. The ensuing battle was one most ferocious, and the dragon contained the strength of a legion, but Martin was faster. His little mare flashed across the countryside and ran rings around the beast while Martin aimed his spear at the tender area between the scales. It was almost the following dawn when Martin – his mare hacking and shining with a thick layer of sweat – faced the dragon in a field where the hills looked on and dealt the final blow. A cry like the banshee’s scream issued from the dying lips of the beast as it crumpled to the ground and was no more. When  Martin returned to his village, he was met with jubilant cheers and a great feast, and to commemorate his daughters, and the bravery of Martin, the farmer had a stone that bore the story of Martin and the Dundee Dragon erected in the place where the beast fell, and there it stands to this day.

The Dundee Dragon has left a subtle, though ongoing legacy on the city of its namesake, and while Dundee is often thought to mean ‘Gift of God’, an alternative translation would name it ‘Fort of Fire’. Perhaps the Law was never truly a volcano, but the abode of a dragon who for now, sleeps. 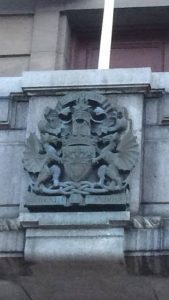 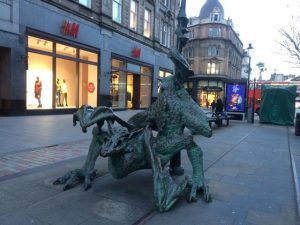 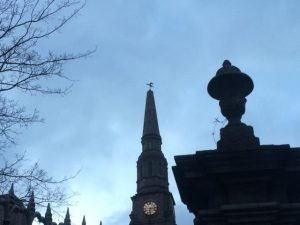 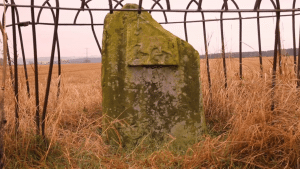