Time to Empty the Toy Box

I believe university is a wonderful place to explore new ideas and challenge existing ones and my friend Hope Carolan, a DJCAD student, did exactly that recently by initiating a gathering outside of Caird Hall for the support of the UN conference for nuclear disarmament. Hope and thirteen others took to the streets adorned with paper bikini posters, carrying placards and holding up banners. The participants gave out postcards to be signed ready to be posted to Boris Johnson, the foreign secretary, in the hopes to put pressure on the UK government to send a representative to the UN conference.

I asked Hope why she wanted the foreign secretary to arrange for a representative to attend the conference, and she replied by saying that the possession of “Nuclear weapons won’t be changed overnight, but the UK should at least talk about it” given the fact that they have previously stated that they support possible moves towards a nuclear weapon free world. 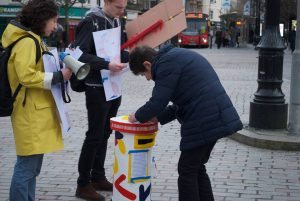 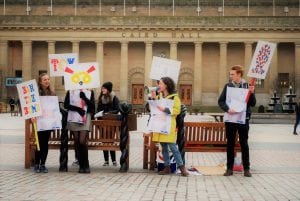 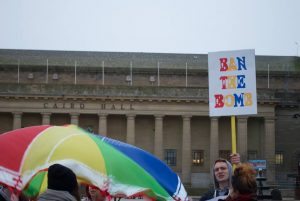 The protest outside Caird Hall gained 85 signatures from passers-by and Hope commented, “Even if they didn’t sign a postcard, we at least rose awareness” which is certainly true as a news station was trying to record a piece outside the Overgate Centre while “nukes make me puke” and “You can’t hug a person with nuclear arms” was chanted through a megaphone. Hope gained 224 signatures for the cause in total which surpassed the goal of 215 which is incidentally the total stockpile of nuclear warheads in the UK, 120 of which are strategically deployed and 95 lay in reserve. The UK alone therefore has more nuclear warheads than there are countries in the world. I was also informed that each trident submarine carries 40 nuclear warheads which are eight times more powerful than the one dropped on Hiroshima.

If you wish to get involved with the campaign there is a CND (Campaign for Nuclear Disarmament ( http://www.cnduk.org/ )) website where you can sign a petition for the same cause, if you wish to you can become a member, or even write to Boris Johnson, the foreign secretary, yourself.

“Nuclear weapons won’t be changed overnight, but the UK should at least talk about it” -Hope Carolan

Scotland itself will be sending a representative to the UN conference, however it may help to still write to your local MP to encourage more action to be taken by the UK as a whole and to show you support for multilateral nuclear disarmament as a member of the public.

Hope has sent an email to Boris Johnson herself and is still awaiting a reply.

I believe it is incredibly important to engage with current affairs especially whilst at university as there are so many outlets for engaging with the world off campus, for example through protests, debates, gatherings and events held by societies. Student can be at the forefront of political and social change. If you are passionate about a certain issue then why not try and get involved and have your voices heard?