Now that the summer break has begun and all submissions have been submitted, it is time to go on vacation! While there are so many things to do within Dundee and Scotland, as an international student howe

-ver, I wanted to take the opportunity to travel to the other parts of the UK.

My first year in student halls allowed me to meet so many amazing people who were not only international but from within the UK as well. A couple of months ago I was privileged to visit Northern Ireland with my flat-mate and stay with one of our really close friend’s family who we met in first year. So, we started planning our trip approximately a month and a half in advance. This way we were able to get decent train and plane fairs. We decided to fly from Edinburgh to Belfast, which to my surprise only took approximately 30 minutes. However, the best part was the plane we were travelling in had propellers on them, and in my many years of travelling in planes never had I ever travelled in a plane with propellers, so naturally I was quite scared even entering the flight! Nevertheless, made it to Belfast in what seemed like a blink of an eye. From there we travelled for another hour by car to get to our friend’s town in Dungannon. 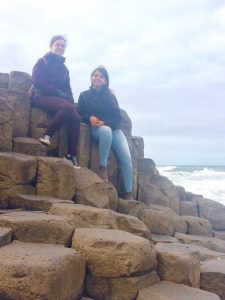 Our first day was primarily spent being shown around the wee town by our friend and being spoilt rotten by his family- they made us feel at home the very minute we got there and immediately incorporated us into the family as one of their own with all the love and affection (big shoutout to his mum <3). The second day before we began our journey, we decided to stop at Tesco to get supplies for the road and for the picnic we had planned. As we were loading the boot with the groceries, our friend accidentally put the car keys in the boot as well and the car was locked… So that was our very eventful start to the day! After a couple of hours of delay, we were back on the road and our first stop was ‘The Dark Hedges’ which is known for its iconic trees and also for an episode of Game of Thrones being shot there. Then we moved on to have our “picnic” by the coast in Ballintoy, but couldn’t really sit outside due to it being very windy and ended up eating in the car- but hey the view was spectacular! After this we moved on to go see and cross the very famous rope bridge Carrick-a-Rede Rope Bridge, and what a sight it was. I even got a certificate which said, “This is to certify that Simran Chopra Crossed the bridge” (that’s totally going on my C.V.). Finally, to conclude the day, as our friend studies Geography, how could we not go and see the Giant’s Causeway.The Giant’s Causeway is known for its naturally occurring basalt columns as a result of a volcanic eruption. 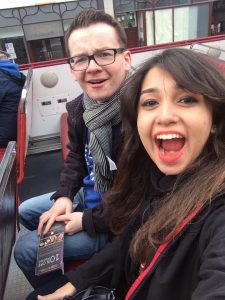 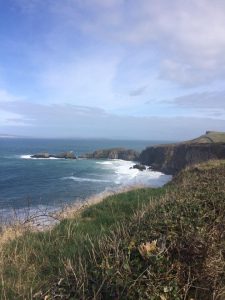 The third day we decided to be typical tourists in Belfast City and decided to take the hop on hop off bus tour. We went to the Titanic Museum, Parliament Buildings, Belfast Castle (which was on a hill), International Wall Murals, visited Queen’s university’s campus and finally ended the day with going to a roof top bar called ‘The Perch’. Over the next couple of days, we spent most of our time going around Dungannon, having road trips and picnics, participating in a pub quiz, and spending time with our host’s family and friends. We also got to the border between Northern Ireland and Republic of Ireland! All in all, I would defiantly recommend going to Northern Ireland as a great get away from Dundee, even if it is for a couple of days. 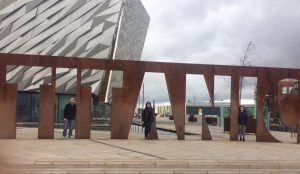 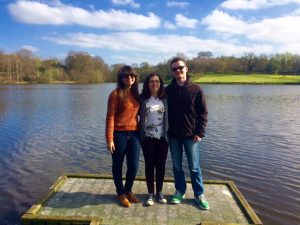 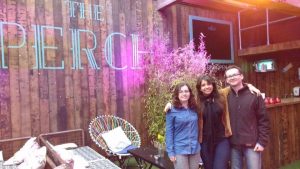 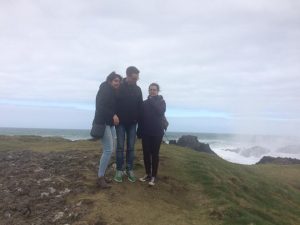