The White Lady of Balgay Bridge

Dundee is a haunted city. From the Grey Lady of Glamis Castle to the ghoul that supposedly haunts the Wellgate shopping center, there is no shortage of scary stories within the ghost of Dundee’s walls. You can book a Dark Dundee walking tour for the full supernatural experience, but since it is now the month of all things spooky, let’s look at a story that I grew up hearing, and inspired many ghost-hunting escapades in primary school.

There is a bridge that stretches over the gorge between Balgay Hill and Balgay Cemetry (or “The Western Necropolis”). Built in 1873 of cast-iron, the bridge today seems entirely unthreatening with its bright blue paint and views across the Tay. Extremely photogenic, it makes for a great picture in autumn leaves or winter snow. However, prior to renovation and reopening in 2002, the bridge’s appearance lived up to the creepy stories behind it. Brown and weathered with touches of vandalism, the structure had large metal arches at either end and a wire barrier at its sides that made walking over it seem like entering a cage than anything else.

The barriers were a haunting reminder of the bridge’s supposed past. Everyone born and bred in Dundee will have their own take on the tale of Balgay Bridge. Some claim the woman that haunts it threw herself over, and others argue she was hanged. There was even a theory in my school that a witch who lived nearby pushed the poor woman who was crossing and the benchmark carving on a rock under the bridge was where she struck her head. Regardless of how it happened, it is agreed that the sound of her scream can be heard to this day.

She isn’t spotted nor heard very often; perhaps she doesn’t like the new look of her home. But regardless, have your wits about you while crossing the White Lady’s Bridge, as some claim she pushes the unsuspecting over the side to meet a fate similar to her own.

Then again, the dog walkers don’t seem to mind. 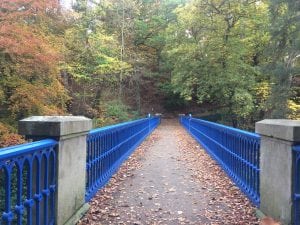