I am just back from one of the most rewarding and exciting weekends I may have ever been on! I was lucky enough to be chosen earlier in the year to become one of Girlguiding UK advocates which basically means that I am one of 18 female spokeswomen on behalf of the charity. Some of the work that we do has included leading the annual Girls Attitude Survey, influencing government policies and regularly running campaigns to ensure that girls voices around the UK are heard.

My extremely exciting weekend started on Friday night going on the Caledonian sleeper down to London, which was fab because I was able to get some sleep before my full on weekend. The only thing was that breakfast arrived to my room at 6 in the morning (ugh) so I was rather groggy and grumpy when the poor lady came to my room with it.

When I arrived in London I went for a well needed Starbucks (obviously) before heading to Girlguiding HQ. By this point I was extremely excited to meet all of the advocates who I would be working with over the next two years. We started the meeting with some get to know you games and I was able to listen to why everyone had also applied to be an advocate. I was so relieved to hear that most people had applied for the position with the same intentions as me, to make a difference in one way or another to young people’s lives in the UK.

We started our workshops by hearing from the acting Chief Guide about what our role is. We discussed how few people across the UK and in guiding know about us and what we do. This is partly the reason why I’ve decided to write this blog post, to not only share my amazing experience, but so everyone who reads this gains an insight into the typical role of an advocate. This was followed by a chat with the UK Parliament outreach team about the role of women in Parliament and also how is best to contact MP’s in our constituencies when we want to create a campaign or raise an issue to be discussed in Parliament. 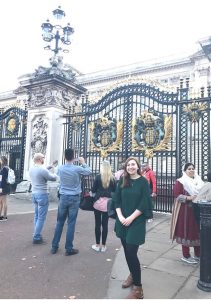 It was all really helpful information which will considerably help me to create campaigns to achieve my goals in the advocate group. This was followed by a conversation about the Girls Attitude Survey which we have a part in creating the questions for, which is the largest survey of its kind and is the research that we as advocates use to decide which campaigns to run on behalf of the girls who have answered those questions. The day was finished by a lovely meal in Zizzi and then on to our Youth Hostel in Chelsea for the evening.

Sunday morning, we were up bright and early for a 9am start (I am really not a morning person..). Breakfast was provided at the Youth Hostel and we travelled by underground back to Girlguiding HQ. It was really settling to see that there was more of a secure presence around London after the recent attacks from more underground staff to more police around the whole area.

My favourite part of the whole weekend was sunday mornings spokesperson training, where we first years learned all about what is expected of us when on camera, radio or being featured in magazines/newspapers. From what to wear to what to say my mind was completely put at ease about this frankly scary part of being an advocate. I didn’t realise how often this would actually happen when I signed up as advocate, as previous years have featured on Good Morning Britain, STV, BBC Breakfast and more. As much as all this is quite scary for someone like me who has never been on TV or radio it’s quite an honour to be trusted enough by Girlguiding to be that person who will go out and speak on behalf of the charity.

This was all followed by a talk about digital campaigning which was incredibly helpful and totally tied in with what the Outreach team had said on the Saturday and a photoshoot outside Buckingham Palace (I know right!!). I was really sad that with that the weekend was over in what seemed a flash as I headed back to the train station to get the sleeper back to Dundee. I’ve met some amazing people who I am delighted to be working with over the next two years and if it’s possible I feel even more honoured to be a part of this amazing advocate team!

So that’s my weekend over. If you want more information or to keep up to date with what we are campaigning for and doing, I have set up a twitter to track what I will be up to over the next two years so give @KRWGuide a follow! Thanks for reading, and I am sure that you’ll be hearing more about my adventures as an advocate over the next two years on this blog.