Diary of a Postgrad Student – Great Pumpkin Carve Out

You might have noticed that it was Halloween on Tuesday. Last week Glasgow University Psychology Department threw down the gauntlet in a pumpkin carving competition. Pretty soon Dundee and Aberdeen Uni Psychology departments accepted the challenge. It was time for the Great Pumpkin Carveout!

The catch was that the carvings had to be on a Psychology theme. They set up 3 categories: Genius (best carving), Controversial and Funny. 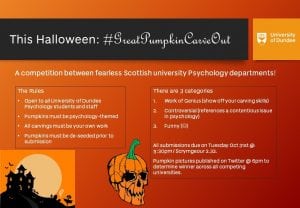 I had an idea. I could do Schrodinger’s cat. This is a thought experiment which covers Quantum physics, Philosophy and Psychology. The idea is that you put a cat in a sealed box with some poison. You don’t know until you open the box whether it is alive or dead. It’s not the nicest experiment, but many aren’t and this is actually just theoretical. In Psychology, think of the example where you want to ask someone on a date. Until you do, the answer could be yes or no. Once you ask, there is no going back. So often people will put of asking because at least, in the uncertainty, you can believe you would get the outcome you want.

I figured I could take a pumpkin and stick a tail out of it, and some hint of poison. Job done. (the rule was the insides had to be removed from the pumpkin)

But I wasn’t sure if it was Psychological or not. I thought about it all weekend. The department had arranged to have carving stuff set up from 3pm on Tuesday in the Scrymegour building.

I missed out on buying a pumpkin over the weekend. My first lecture was Tuesday morning and I asked Fhionna if she thought it was Psychological enough. She did.

Then I had a problem. At lunchtime on Halloween I needed to find a pumpkin. I could make the tail easily. I also had a client at 2pm which meant I would either have to get in before 1pm or after 3:30pm. I popped to Tesco’s and Asda on the way back from Uni. No pumpkins. Not looking promising. Then, I had a flurry of exchanges with friends before my client. There were pumpkins in Lidl.

So a friend picked one up for me and saw my client. When I’d finished, I grabbed a wire coat hanger and some black cloth and fashioned a tail. I dashed into town, looked for some slime, failed and got green play doh instead. I then did a dodgy deal in the Science centre car park and got my pumpkin off a friend.

All the while I’m thinking “why am I doing this? I should just not bother”. But I had an idea and I’m trying my best to join in as much as I can.

When I arrived at the room in Uni, the room was dark. But there was a strong smell of pumpkins. It was now around 4:15. The room was full of people and carved pumpkins. They’d been busy since 3pm and now had the lights out taking photos. I quickly set up and scooped the insides out of my pumpkin. Again I was wondering why I bothered but I kept at it. I also knew mine wouldn’t show up in the dark (wish I had glow in the dark goo!) 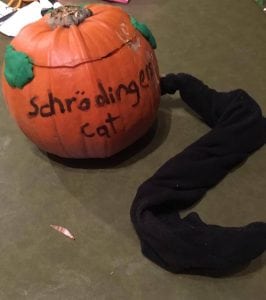 Anyway, I finished in record time. The pumpkins were arranged on different tables based on categories. Everyone voted for their favourite in each category and that would be put forward for the competition. Mine did get a few votes, but didn’t win the category. There was a great atmosphere in the room and some really good carvings. I was glad I didn’t enter the genius category! 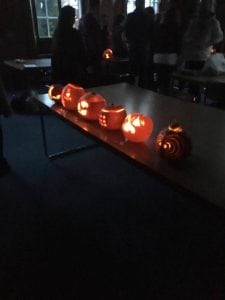 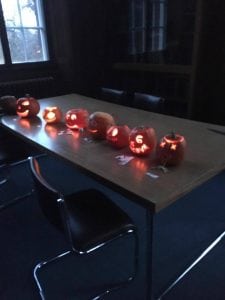 Aberdeen Uni set up a page where you could vote. It was all done on Twitter with #GreatPumpkinCarveOut

Then over a day everyone voted for their favourites in each category. 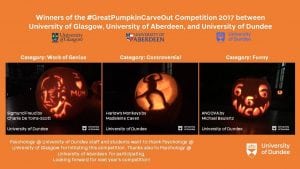 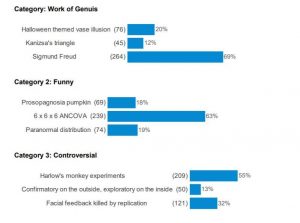 Bravo for all who organised and got involved. I suspect this might become an annual event involving more and more Uni’s. I’m really glad I took part. I just wish I had planned better and joined in the whole activity!