On November 17th I took a trip with the International Society up into the highlands of Scotland.  It was worth every penny, and it would have been worth every penny if it had been twice the amount.  To recap, we traveled with Nory from Heartland Travels (https://www.heartlandtravel.co.uk/) and it was absolutely fantastic.

Our nights were spent in the Stationmaster’s Lodge in Stromeferry, just off a massive Loche we got to wake up to in the mornings.  With zero light pollution, all the stars were visible (the night it was clear outside!) and the quiet was wonderfully calm compared to the craziness that is on-campus living.

Our first day started early, and were greeted with an incredible sunrise – you know when things are going to be good when the whole day you’ve counted 11 rainbows before 3 o’clock. Our first stop was Doune Castle (any Outlander fans?) where we tried really hard to sneak in, but tickets were required (and by ‘sneak’, I mean we peered through a keyhole like a bunch of mid-century gossips). One of the roads our guide normally took to our next destination was closed, so the scenic route was our only choice- and it was lovely.  Scotland has some incredible views, even when it’s just 20 minutes down the road. After picking up our lunch in a small town whose name escapes me (but apparently Scotland’s last which was sentenced there! in 1940!), we passed some of the largest loches in Scotland according to Nory, our guide, who then took us on a small hike to and past Rob Roy’s Grave. We hiked up to Creag An Tuirc, the ancient rallying place of the Clan Labhran, and while watching the clouds rush through the valley, we were treated to 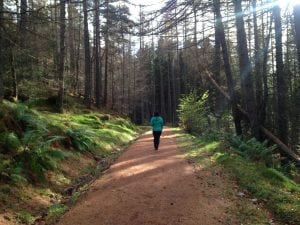 some of the ancient history surrounding the Highland clans.

As we continued on, there were lots of places to stop for photos – including the windy passage next to the Three Sisters mountains in Glen Coe.  I didn’t know if my hands or feet would freeze first, but that’s my fault for leaving my jacket in the van. All the way in Glenfinnan viaduct, we stopped to see the Harry Potter bridge and the monument of Bonnie Prince Charlie (a hotspot for nerds, can you tell?).  On the way up, the clouds decided to spit some hail and rain at us, but the small climb was worth it for the views awarded on all sides of us.

After making it out to the Stationmaster’s lodge as mentioned, myself and my two flatmates who came on this trip as well cooked dinner in the small kitchen for the troops, as we had all decided earlier in the day that pasta was the way to go.  The fire was burning, the food was good, and all our feet were warm- until the next day.  If you’ve ever heard the Scottish tales of the Fae, I recommend brushing up on those stories, because we next went to the Faery Pools in the Isle of Skye, but not before saying hello to the sharp-edges of the Cuillin 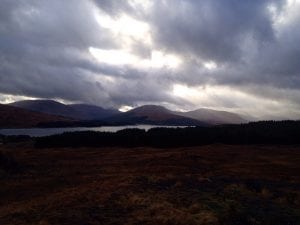 Mountains – a must-see if you’re taking the trip to the isles. The faery pools were a crystalline blue I’ve only ever seen in the Canadian Rockies in glacier pools and the Kalamalka lakes, but had a quality that was also very different.  They say that if you bathe in the faery pools, you’ll be granted eternal beauty – that being said, there were some brave souls from another party who braved the cold waters (as a mini-snowstorm overtook us)- I don’t know if eternal beauty is worth the hypothermia, but get 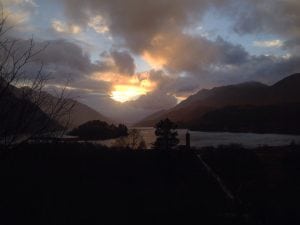 back to me in the summer.

We left then to the Old Man of Storr and Kilt Rock, where we got to see Eagles diving for food.  According to Nory, seeing Eagles in the area we were was very rare, and had once been impossible as the Eagle had gone extinct in the Isles until some were gifted by to Scotland by Canada (You’re welcome).  As good omens go, that’s pretty high up there, especially considering our next trek was a buffeted and slippery hike up the Quiraing landslip.  Incredibly breathtaking (literally and figuratively) views, and some exasperated sheep met us there.  If I were a less compact person, I may have been blown off, but it still would have been worth it. Besides, maybe I would have landed in one of the small loches we could see

beneath us. After a peaceful little jaunt down the road, we went to the Faery Circles.  I’m not a superstitious person, but I wasn’t the only one who said that it felt a little odd out there.  Odd and lovely – and if you’re brave, or want to pay respects to the ancients before us, you can walk the faery circle yourself and make a wish on a strand of hair. I did – I’ll let you guys know at the end of the year if anything happens.

We ate a traditional Scottish meal that night, made by Nory (it was haggis, and you’ll like it) in which myself and several other’s proceeded to build the fire until the walls started sweating. It was a cold day, when you go bring some decent boots, I beg of you.

The next morning was our last, and we said our final

goodbyes to the Stationmaster’s Lodge and the loche beside us by taking as many photos from as many angles as possible, and then we were off to the Eilean Donan Castle, in which the golden hour had just begun with the sun setting itself on the castle’s stone walls.  It was a peaceful drive throughout the day as we made it to Lochness and had a lovely lunch of fish and chips, and some exploring time before getting back to the van for our journey back to Dundee. We stopped at a small, delightful coffee shop just outside of Newtonmore and Laggan

called the Kiln Room Coffee shop – I recommend the coffee cake and mocha!

Getting back into Dundee was bittersweet, as it always in

when you come back to school and all that homework you’d been doing your best to avoid, but the weekend with Nory and all the other fantastic people we’d met was the best reprieve.  I would recommend Heartland Travels & Nory to anyone who listens, as it is I’ve convinced several more of my flatmates and classmates to go in the New Year – so hopefully they’ll say Hi to Nory for me!  If my words were too much, I’m not sorry, I’m just really excited. Hopefully my pictures will substitute for those TL;DR people out there!

I have so many photos I may have to make a second post to include some of the best!