Do you know what a smear test is? No, neither did I until I was so ill I needed one but the GPs in my home village wouldn’t give me one. It was 18 months of fighting, being accused of sleeping around and constantly feeling ill until finally a gynaecologist saw me and gave me a smear test. Fortunately I was one of the lucky young women who’s pre cancer cells were caught early, but cervical cancer is still the most common cancer in women aged 35 and under.

So what is a smear test? Well it a test that is given free on the NHS for any woman over 25 also commonly known as a Pap test. It’s a test that screens your cervix for any abnormalities (like cancer cells) by collecting some samples of cells by either a nurse or doctor. It’s very simple and only takes about 15 minutes. I won’t lie, it’s without a doubt not very gracious there, legs akimbo dawning your all to a stranger, but it really might save your life so why wouldn’t you? You hear a lot in the news and via charities about prostate cancer and men over a certain age going for prostate examinations which is super important – but so is a smear test! So why aren’t we talking about them too? After all, 75% of smear tests stop cervical cancers from developing but sadly 1 in 4 women don’t go to their tests when invited!

But why isn’t it given to women under 25? Well the most conclusive answer I can find is money (isn’t it always). Women under 25 have far lower rates of developing cervical cancer and isn’t always as effective in younger women, giving what my doctors described as ‘wonky results’ so why waste the money on giving women under 25 smear tests. The government have even been known to say that now with the HPV vaccine underway in the UK it is even less likely to occur in women under 25. But what about the women under 25 developing cancer and being told no…

Jo’s cervical cancer trust is a charity committed to preventing cervical cancer by ensuring women know what smear tests are and supporting those affected by cervical cancer. From the 22nd to the 28th of January they are running a campaign called Smear For Smear which is also cervical cancer prevention week. The aim of it is to make every woman aware that cervical cancer can be prevented by something as simple as a smear and are encouraging people to share selfie’s of them smearing their lipstick in support! It’s something so simple, yet so effective so please take your own picture and encourage others to take part. I just hope this post convinces you how vital these smears are and to spread the word about these lifesaving tests. But I can’t end my post without a selfie of my own, so here it is! 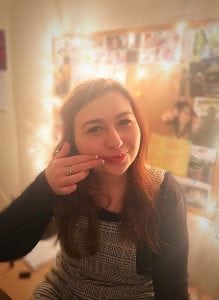