Visiting some amazing points of interest of the north-west Scotland in an epic road-trip.

One of my passions is to travel, to explore the history of the country I am staying in, to meet new people, and of course, to see some neat stuff. Studying in Scotland gives tons of great opportunities to do so, and I am trying to make the most of it. This is a story about a trip I organized last week.

The plan was ambitious: visit isles of Orkney, Lewis and Harris, and Skye, plus some cool sites in between in just four days. Map-wise, something like this: 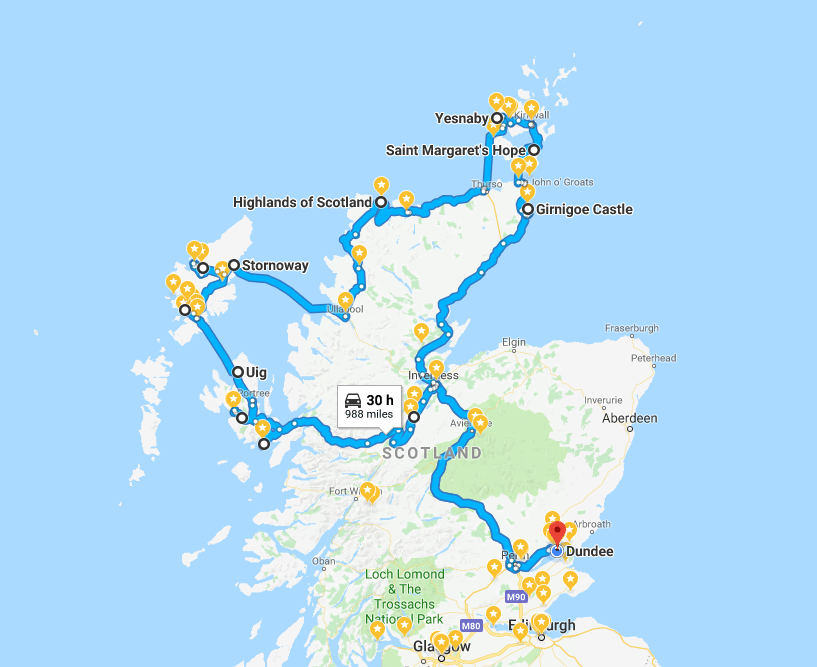 Dundee has a few car rental services, so getting a car is relatively convenient. Once all the paperwork was signed, me and my friend took off. While the A9 had some traffic jams here and there, it went all right. We made a few stops along the way, such as in Carrbridge, where’s over 300 years old stone link across the river of Dulnain. 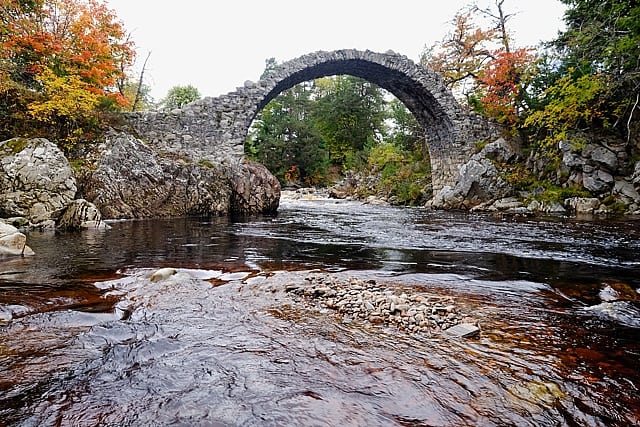 In Inverness, we crossed the Kessock Bridge – This was exciting, as it took us into a part of Scotland where we never been before. The next item on the itinerary was the Noss Head, a peninsula topped with a lighthouse – which is pretty neat; however, there’s another structure next to it: the Girnigoe Castle, and that was our goal: 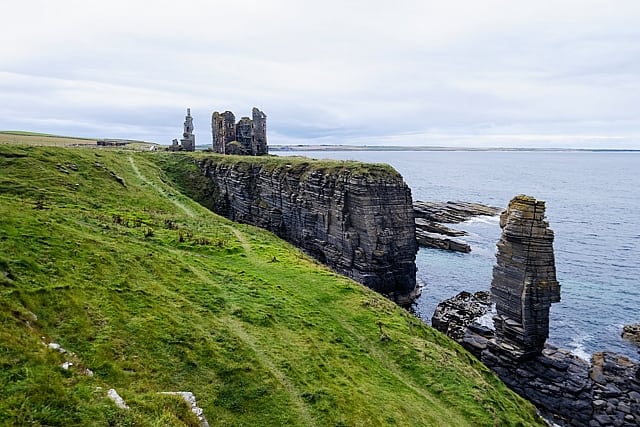 The issue was, we were slightly behind schedule. To be exact, when we got to the castle, the GPS was showing that we need to leave immediately to catch our ferry to the Orkney. There’s only one connection in the evening – and missing it would kind of messed up the whole plan of the trip.

But since the castle was super interesting, we couldn’t resist and went to check it out up close. So it happened, once back in the car, we had to race the the clock and gain each of those minutes back. Thankfully, the road was empty, and so I could squeeze all the power that little car had onto the asphalt. Man, it paid off!

We arrived to the harbor at 6:13, two minutes before they closed the check in to the ferry. And they were pushing it, as we were already boarding at 6:18, and by 18:26 we already departed onto the sea. 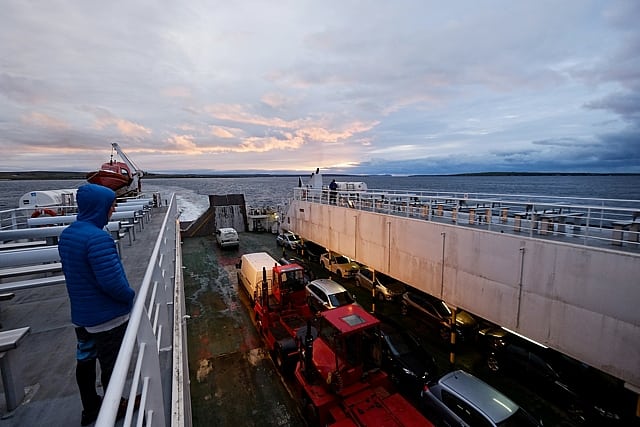 From the water, we had a nice view on the sunset, and Duncansby Head, the most northeasterly point of the Scottish mainland. Exhilaration, yey.

When we went further away from the shore, waves turned on alarms of Audis and Mercedes onboard, while the view was getting better and better. 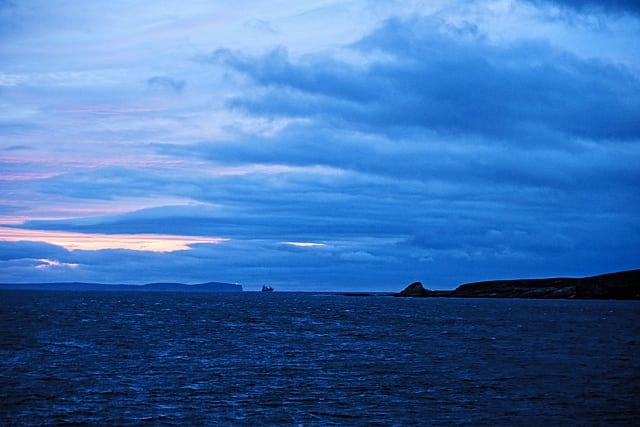 We landed in St Margaret’s Hope, and continued north towards Kirkwall, the capital of Orkney and the place we had accommodation booked for that night. Dinner, walk around the downtown, bedtime.

The next morning we started rather early, and went to see the Ring of Brodgar: a late-Neolithic stone circle. 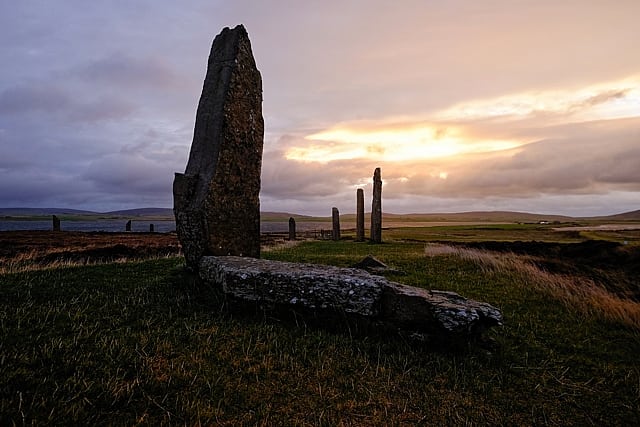 Early birds eat the worms, we had the whole thing just to ourselves. It was absolutely stunning. The place is situated between two lochs, and feels special in any angle. 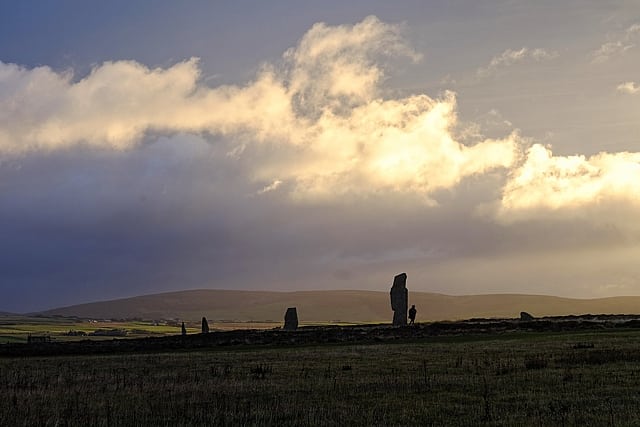 And the sunrise, oh! 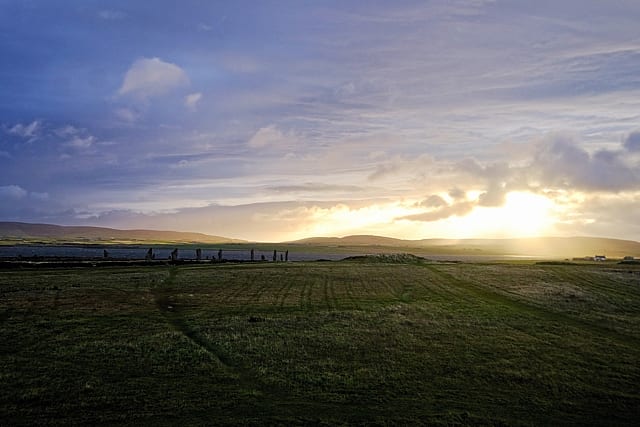 The wind was steady, blowing strong. But being prepared with plenty of layers, this was Ok. It added atmosphere and it was fun: one could perform that famous Matrix scene, when Neo leans back to dodge bullets – the wind would prevent you falling on your butt.

After some two hours on the site, we moved on. We still had some time before we had to get on a ferry back to the Scottish mainland, thus we went to see the western coast. On the way, it started raining, and the closer we were to the coastline, the more the wind strengthen. 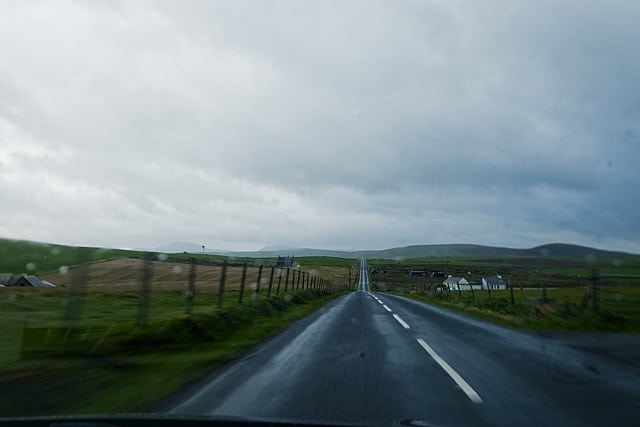 Once I pulled over near the coast, the water on the windshield was moving in 90 degrees. Gravity was no longer in the game, it was raining sideways.Looking at all that made me thankful for all the technology we have available in this day and age, as one can just sit in comfort and travel from place to place. The car was tempting to stay inside – but it wouldn’t be me. The coziness of the car was indeed sweet, but the view was not. Knowing that there should be some appealing cliffs nearby, I braced myself and entered the mayhem. It was an experience. Nature was clearly showing that the wind at the Ring of Brodgar I thought to be strong, was just a fragment of its full potential. Pffff! The wind made it challenging to walk in a straight line, so I kept a distance from the cliffs’ edge. But I was able to get a view of what’s happening underneath – the cliffs were crushed by immense waves coming from the ocean with a brutal strength. I tried to take a picture of it, but in a second, my lens was caked with a mixture of rain and drifted water from the ocean. Aye, this won’t give me things for free, I thought. At the same time, I was lured to explore more of the coastline, as landscapes like this, that’s something one won’t see every day! I went further to see what does this place has in store. And what a good call it was! 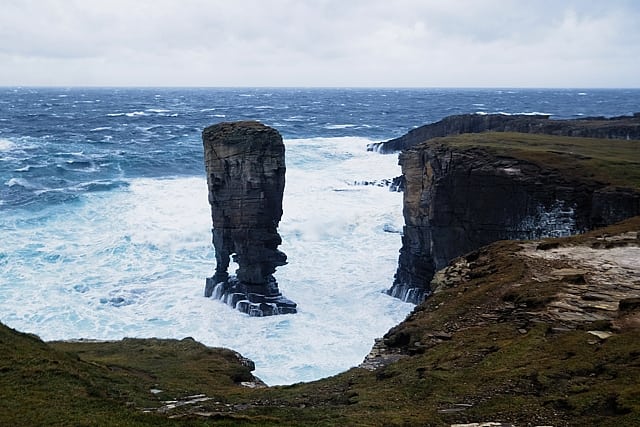 Once back in the car, I got rid of my drenched jacket and set off to Stromness, to catch a ferry to the mainland. On the way, we learned that the salt from that ocean water isn’t really helpful when it comes to windows. Again, I was thankful for whoever came with the idea of windshield fluid.

In Stromness, we had a brunch and boarded the ferry. It was much bigger than the one we used on the way here, there were multiple storeys with lounges, bars, and even a gambling area. The harbor is situated on the east side of the land, covered from the wind coming from the west – this gave an impression that the wind chapter is over, but nope. Once on the open sea, our ship started rocking from side to side like a toy. I don’t think I ever experienced something similar. Inside, you could hear squeaking and cracking noises of the stressed material around, and soon the air got scented by people who couldn’t hold their breakfast where it belonged. So we spent most of the journey on an outer platform instead, optimistically named “the sun deck.” Well, that was fun. see yourself:

Who needs rollercoasters, when you can have the Scottish seas? …And this was a big, heavy vessel – I can’t imagine how it would be on some smaller one. How the heck they did this centuries ago, on those wooden boats? Before we safely landed, I got to speak with one member of staff, and she said that these conditions are only 5-6 times per year. Interesting, it was.

We left the ferry turning to the west, on a winding road along the north of the north. 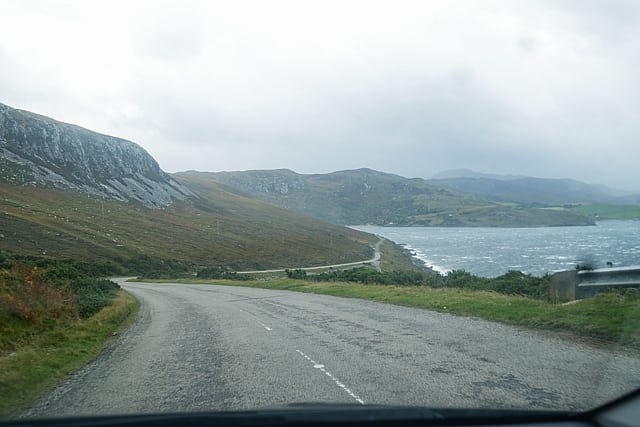 There are many points on interest in this area, but as the rain beefed up and also we didn’t want to be in a rush for the next ferry, we passed most of them. But when it’s raining, and you know there’s a charming cave nearby where you could hide; well, that can’t be missed..

The cave is named Smoo, which came from Norse, and means “a cave.” It was used as a fishing base for ages, there are speculations that first settlement here was 5000BC. Smoo has a large entrance, but you can actually get further in by a wooden walk, where’s a roaring waterfall. I did not expect this, nice! 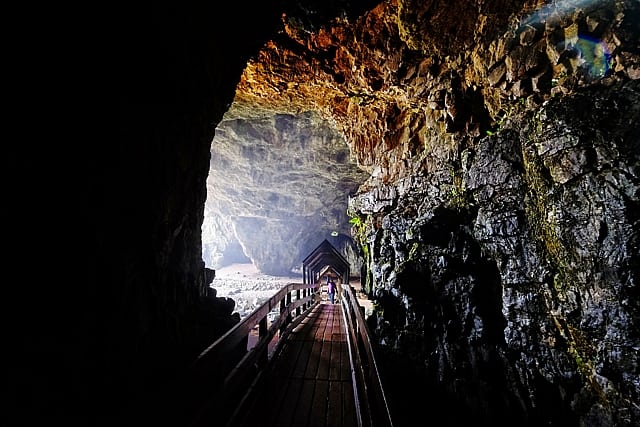 Snack-time, and back to the road. Now, let me tell you more about the road itself. It is a part of the North Coast 500, which is a driving icon. It is no secret, I enjoy driving nice roads, and I like the path to be a goal itself. I actually have a list of roads I’d love to drive on, and the NC500 was among the top of it. And here’s me, living the dream.

We made another stop near the Ardvreck Castle, another good one. 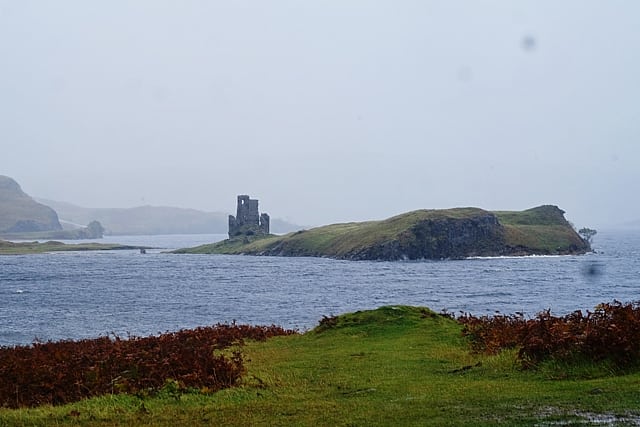 From here, we got to Ullapool, a town which facilitate a ferry link to the island of Lewis and Harris. Supper, sleep early, wake up early.

The following day we kicked off with another set of standing stones dating from Neolithic period: the Callanish Stones. 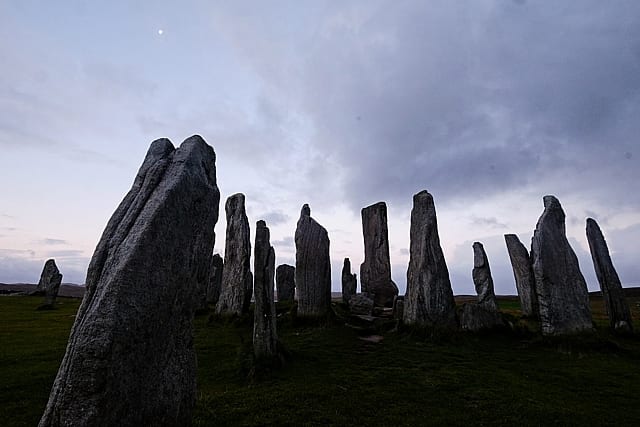 It was ideal. There were multiple storms circling around, but the site itself was dry. 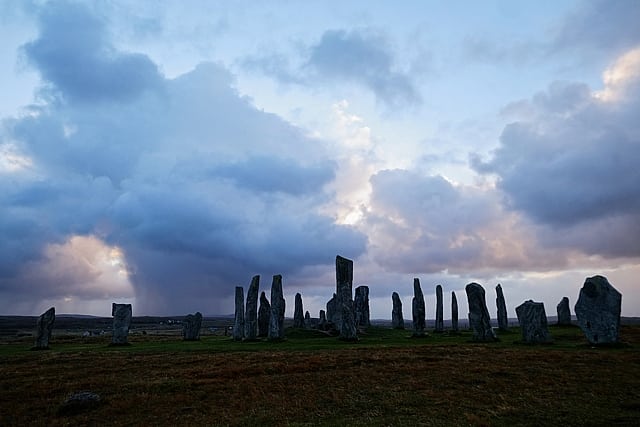 What a place. After being lucky to see some menhirs and dolmens in the western France and England, the sites here in Scotland are clearly my favorite. The stones are impressive, set in enchanting landscapes, and with hardly anyone there. Oh, and accessible free of charge, too. A big contrast to Stonehenge, which is expensive, overcrowded and with rude security guards.

Having such fun exploring the stones, we decided to see more. On a smaller island nearby, Bernera, is another set of them. 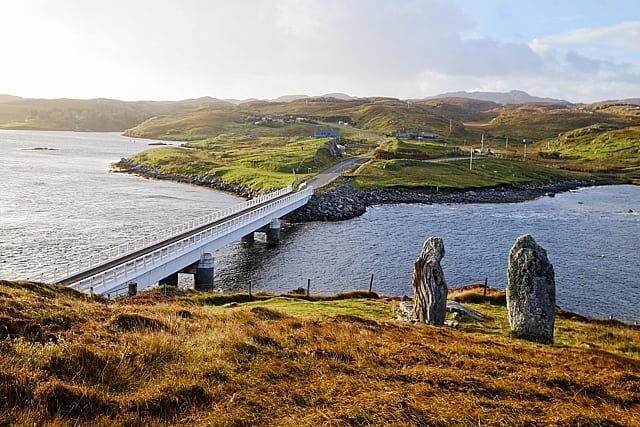 Smaller, still cool. What’s interesting, the stones here are different to those used for the Ring of Brodgar. The ones on Lewis and Harris have more prominent structure, and the rock seems to be more weathered. They look incredible. Here we had breakfast, enjoyed the place, sunshine and everything.

Later we opted to hike up the Loch Scourst. Conveniently, on the way is the Bunavoneader Whaling Station, another point of interest I wanted to see for a long time. Even there’s not much left, it is reportedly the most preserved whaling base on the northern hemisphere. 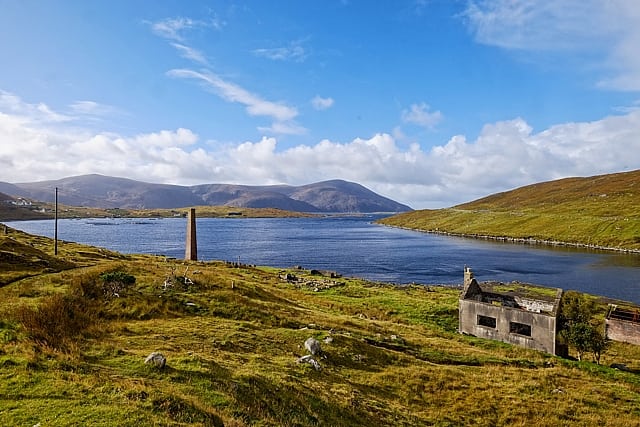 One thing that still stand strong is its over 100 years old smokestack. Having interest in such industrial sites, I went to get a closer look at it. I also got another fresh shower as a bonus. Weather here changes sharply, and it adds glamour to the location. 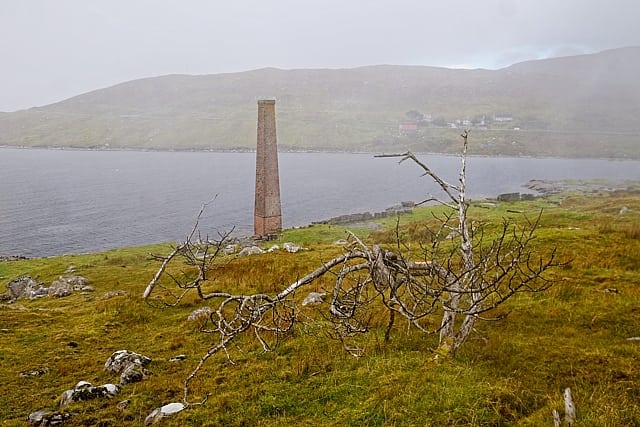 By the time we went up the loch, the weather was different again. 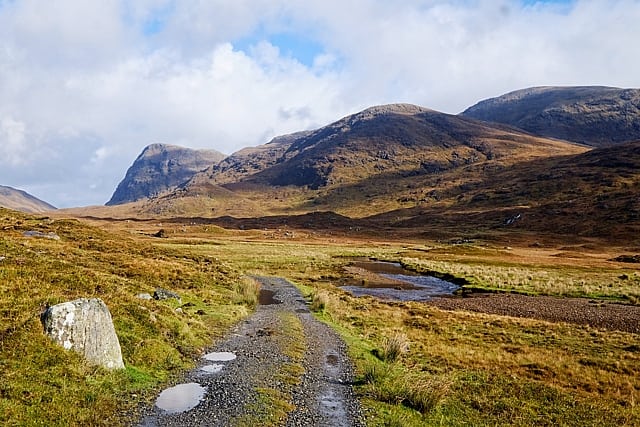 At the loch is an eagle observatory, and also this boat, which offers a calm and scenic way to relax ashore. More fun roads took us to Tarbert, where we stopped for food, and got on a ferry to Skye. 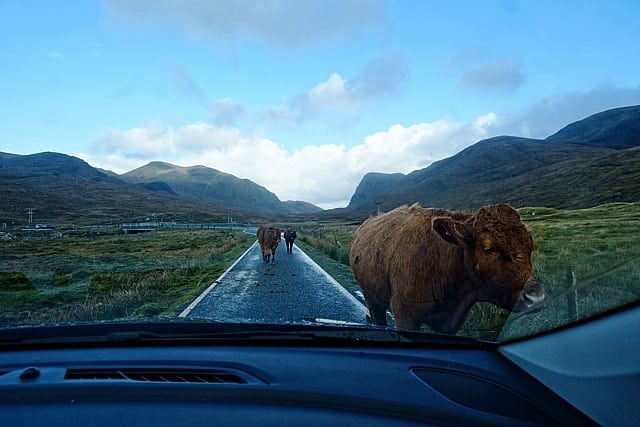 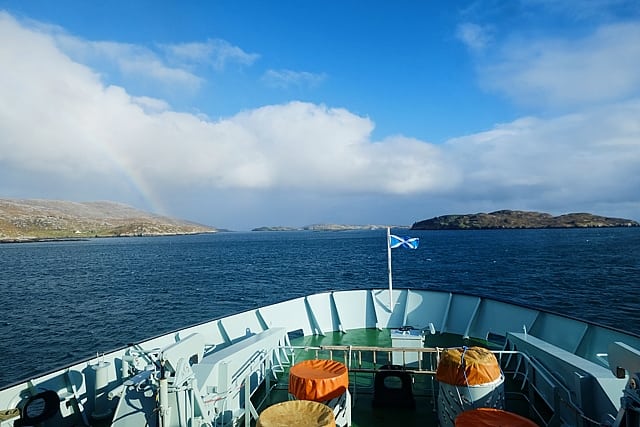 On the Isle of Skye, yet another lovely road let us on the island’s western coast.. Where we had an evening walk, and good sleep in a local hostel. 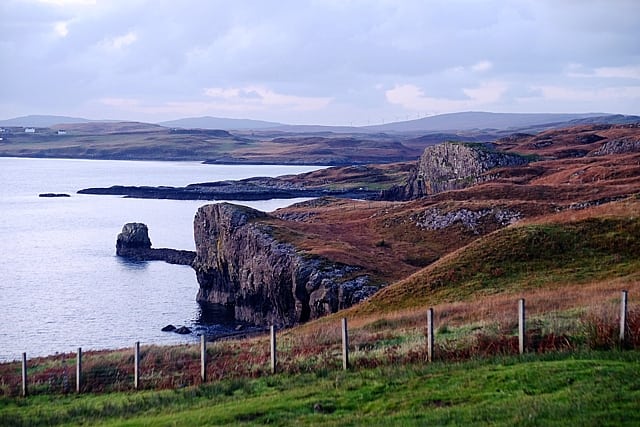 The next morning we went on a nice hike near the Cuillin mountains. 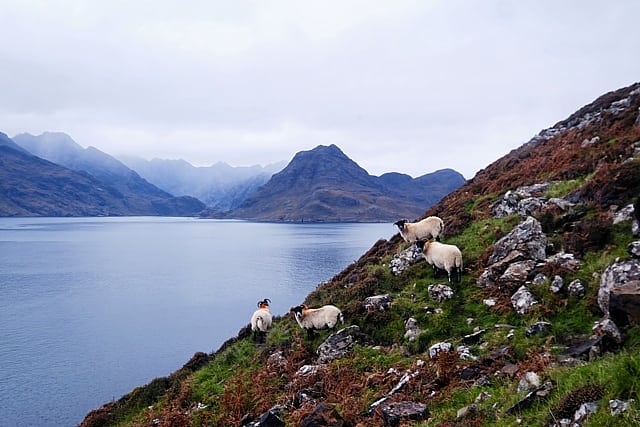 …and started our journey back home. Before joining A9 again, we drove past Loch Ness and the Falls of Foyers. 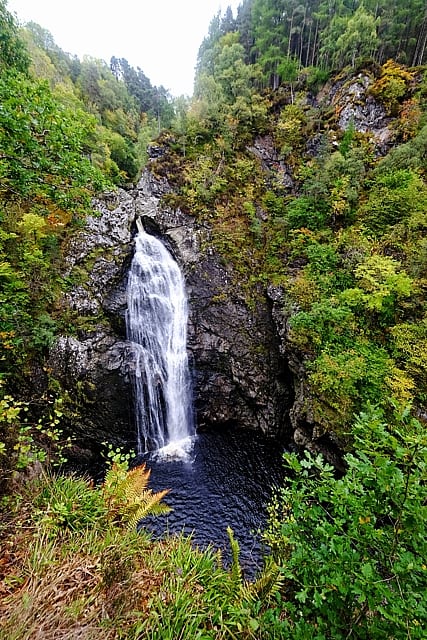 Then, the traffic of the A9 back to Perth was the smoothest I ever experienced there and so we got back to Dundee in a swift fashion.

Once again, highlands proved themselves as a place that never disappoints.