Beyond the Books – Society Spotlight: OpSoc

Dundee Uni has over 130 societies (yeet), so there is definitely something for you here. When I came to university, I had been doing musical theatre my whole life – and had decided that I didn’t want to do it anymore. In first year however, I couldn’t help myself, and decided to go see OpSoc’s yearly musical (which just happens to be the biggest society event of the year). That year, it was Heathers, and I was absolutely blown away by the talent and standards of the show – so off course, I had to join the year after.

Dundee OpSoc (Operatic Society, don’t let that name fool you), is the longest running society on campus, now in its’ 53rd year. And it shows. The amounts of traditions and fun times are endless. We have an OpSoc dance (to the legendary Proud Mary) which anyone who has ever been in OpSoc (at least within the last 10 years) knows and WILL boogie out to, wherever they may be. Initiations, revenge night, monthly concerts and pub quizzes are just some of the other things we get up to, and OpSoc has truly shaped my university experience in such a special way.
OpSoc’s previous productions have included Spring Awakening, Jekyll and Hyde, The Addams family and most recently Nine to Five (we all love a bit of Dolly Parton don’t we?). Next semester, OpSoc are putting on Loserville the musical (6th-9th March, 2019) – and trust me, I’ve seen the rehearsals that are long underway, and it looks absolutely amazing.
Societies are one of the best ways to create an amazing social life for yourself in uni, all the while being able to destress and do what you love on the side of your studies. Here are some of my favourite things that I’ve taken part in in OpSoc, for a wee look into how busy and exciting the societies here at Dundee uni are, and how incredibly fun your time here will be. Also, for any wee musical theatre nerd like me out there, you’re in for a treat! 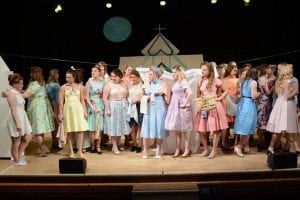 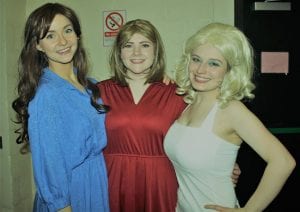 Every start of the year in September, OpSoc puts on it’s yearly weekend show. The weekend show is a show we rehearse and direct all within one weekend, starting Friday morning and ending with an incredible performance on Sunday night. This is an amazing opportunities for freshers to show their skills and get to know everyone in the society – it’s a stressful weekend, but it’s filled with delusional dancing, getting to know people over learning your lines and lots and lots of laughs.

OpSoc hosts regular concerts, most recently their acoustic concert, and next up the amazing Christmas concert. This is a great way for us to get to sing those songs that aren’t necessarily from musicals, while getting to show friends and family how amazing OpSoc is. 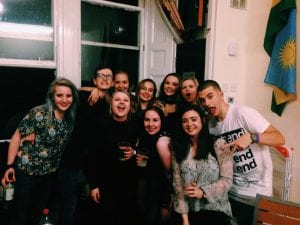 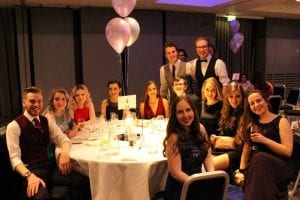 Social life is a huge part of OpSoc, because it tends to be where you make your best friends in university, much like most societies are. It’s like a big family, and it’s quite amazing. We do things like initiations (do not fret, we aren’t that mean), revenge night (and you do get to take revenge), random movie nights, barbecues, sports days and much much more.

In January, OpSoc hosts it’s annual Presidential Ball, which is no less than magnificent. This is especially great, because Alumni “Opsoccers” join us from all over the world (ok, maybe more like all over the UK) for an amazing meal, nostalgia from the years past, and off course that Proud Mary boogie! 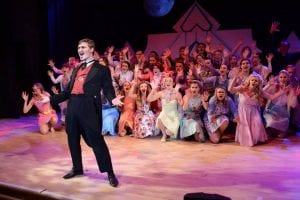 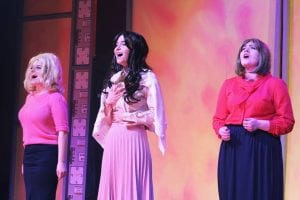 The main show is the biggest event of the year, taking place in early March. I’ve had the pleasure of taking part in 2 major shows, The Witches of Eastwick and Nine to Five. The rehearsal period starts in September after the weekend shows, and goes on till the last show date. It’s an intense but incredible experience, with weekly rehearsals that soon turn into long Sundays with all your best friends, all combined with amazing choreography, direction and musical direction, to put together one of the most high quality AMDRAM shows I’ve ever seen!

After the last show, we get a wee bit rowdy. After an incredibly stressful week, there is nothing better than gathering the whole cast together for an all-night party. 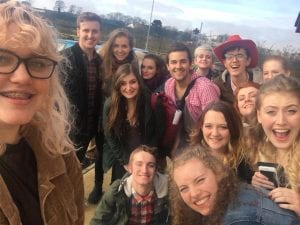 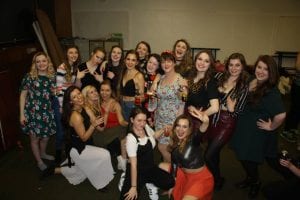 I hope you’ve enjoyed a wee look into one of the biggest societies at Dundee uni. We’re fully student run, and so are all other societies. It is a great way to not only get some work experience for example by being on the committee, but also to make friends for life just like I did.
If you’re on campus and interested in OpSoc, make sure to come along to our TV show pub quiz “Chuckle Quizion” on the 20th of November at the Beer Kitchen! And if you’re joining Dundee uni next year (yay you!), make sure to look out for us at the Freshers Fair!