Last week I was conferencing and sightseeing in the capital of the Republic of Ireland.

The purpose of this trip was to attend the Global Undergraduate Summit, an event for commended students from any academic area – I got there based on my work “Burnout” and “Journey to Scotland.” But I also used the opportunity of being in Dublin to see the city.

I arrived as the darkness fell, and before I got out of the airport, my watch shown that there’s a number of status-yellow weather warnings in place. Indeed, heavy rain and strong winds weren’t as inviting to commence my excursion of the city, so I went directly to my hostel. The rain was gone about an hour later, opening the chance to go for a for a walk. Curious to see what’s the city like, that’s what I did.

The first thing I noticed were ruined umbrellas on every other corner. Wind and umbrellas don’t mix well. Getting deeper into Dublin was interesting. In many ways, it resembled the UK (architecture, weather, double deckers, driving on the same side, English…) yet, it felt surprisingly different. The atmosphere reminded me places like Amsterdam and New Orleans more than any city I visited in the UK.

There’s a river going through, buildings are mostly from bricks, but I think the main factor that contributed to this impression was the local generous attitude towards nightlife.

Because of that, some streets offered a combination of grim and glamour – Nicely lit buildings were connected by pavement full of litter tossed around by the drunk people. Another downside was surprisingly large volume of smoking in public places. On the plus side, loads of local bars offer live music. From questionable cover versions of pop songs to immensely cool Irish folk, this ended to be an attraction for pretty much every evening. 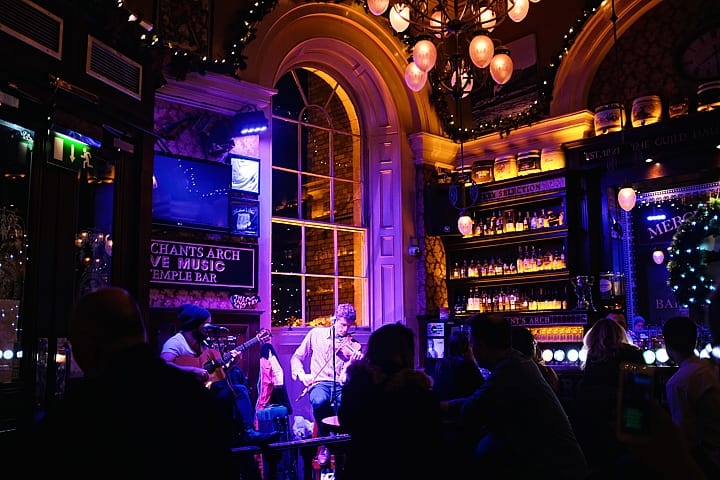 The next day I planned to see some galleries. However, the first thing in the morning was to get on the top of the tallest smokestack of the old Jameson Distillery. 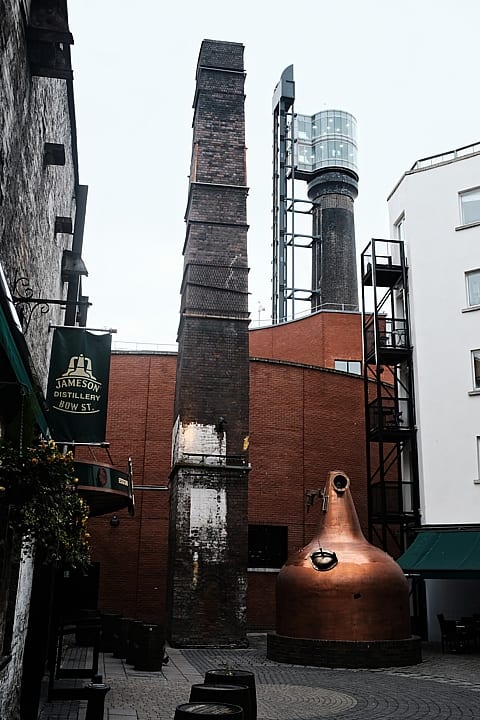 The smokestack is from 1895, the time Jameson was at the peak of success. But then the Irish whiskey industry sustained many hits by the Prohibition, trade conflicts and the World Wars. Jameson merged with other brands, and moved production away from Dublin in 1971. The site then declined until the end of 20th century, when the area got transformed into residential and office spaces, and Jameson opened its visitors centre here. The Smokestack then got two decks of an observation platform fitted on its top, accessible by a lift. But around 7 years later, the lift broke down, and nobody was keen to fix it. The deck then closed for many years – in fact, internet still says that it is not open. But as I do like industrial points of interests, I planned to visit the site regardless. And surprise, they let me in. Only instead of a lift, I had to climb nearly 250 steps. I will sound like a broken record, but the luck is for the prepared.

After this unplanned, but exciting morning stretch, I got down to business, as I headed to the Irish Modern Museum. It is located in a building of a former hospital/retirement house for soldiers from 17th century. 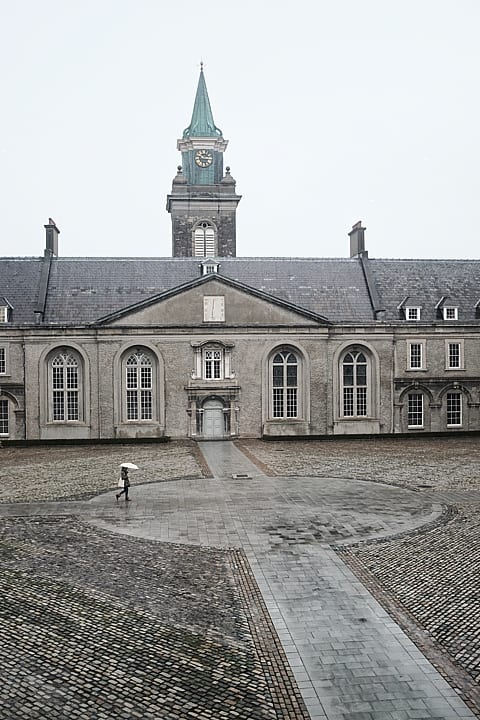 Inside were four exhibitions. Whether it was a set of photos showcasing beauty in simple things that surround humans every day, or very sophisticated mirror ornaments, they were all enjoyable and inspiring. Then I took a walk across the attached garden, which leads to a park that goes towards the Kilmainham Gaol. It is a former prison from 1796, now a museum. 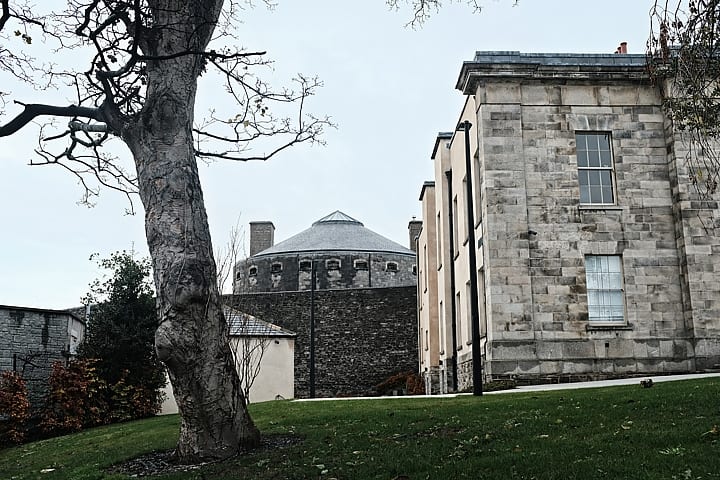 It is a place that played a role in the Irish nationalistic movements since it was built all the way until the Irish Free State was established in 1922. Many of leaders of the rebellions ended here, often being executed. Although far from cheerful, it was interesting to learn about local history.

There are monuments reminding the struggles of gaining and maintaining the nationality across the whole city. Reading signs stating life losses related to the nation, I couldn’t stop thinking about the idea of it, the need for identity and union, but also the dark side of the matter, when people are judged based on their passport rather than the merits they represent. It is so easy to slip from patriotism into extremes, and so it happened that since I started living on my own, the amount of negative experiences linked with nationalism outweighs its befits by a large margin. Concluding that I ain’t going to solve this issue today, I moved on.

Then I got purposely lost among the streets, where I got to talk with a few locals about the city. People I met were friendly, but strong Irish accent took effort to get used to. Eventually I ended in the Trinity College, the oldest and the highest ranked university in Ireland. 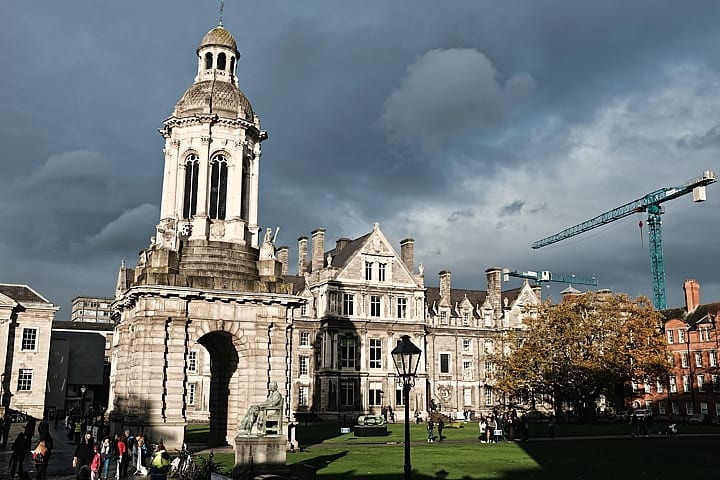 There I had a lunch and visited the Douglas Hyde Gallery. Since the conference later included a visit to Trinity, I didn’t explore much of the rest of the campus and went to see another two galleries instead. To reach them, I ended walking through some visually stimulating back streets… 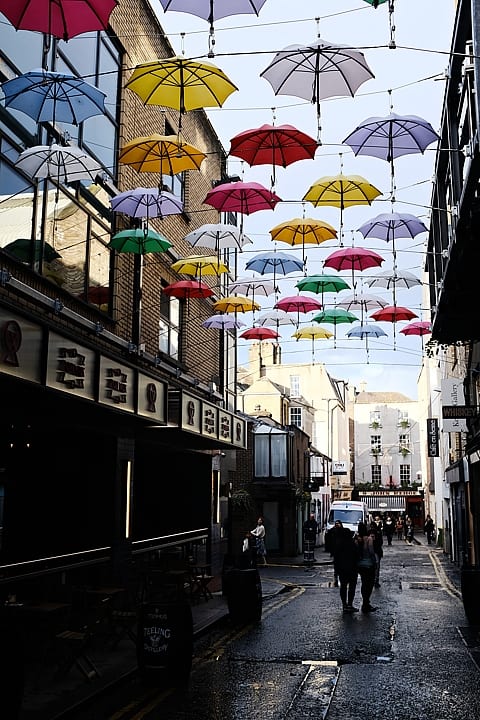 …Some of which were prettier than others.

There are also some parks in the area, so when the last gallery closed, I went there. The St Stephen’s Green proved as a nice place to enjoy the sunset. 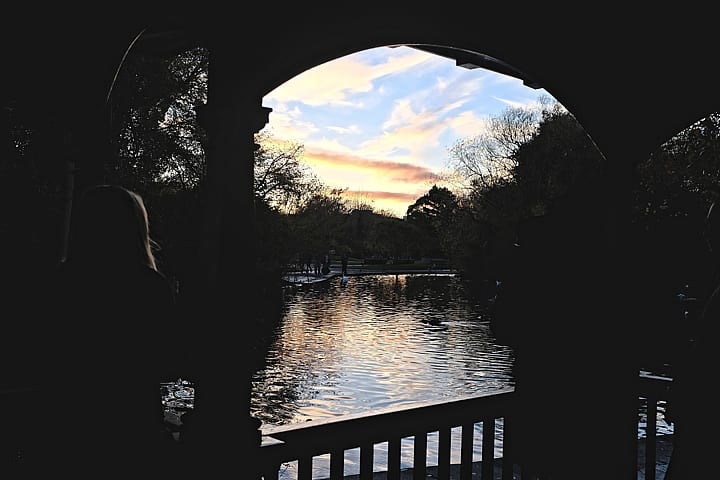 At this point, I was tired after a day of walking. But I also didn’t want to waste the opportunity of Dublin. More nice corners of the city had to be explored! 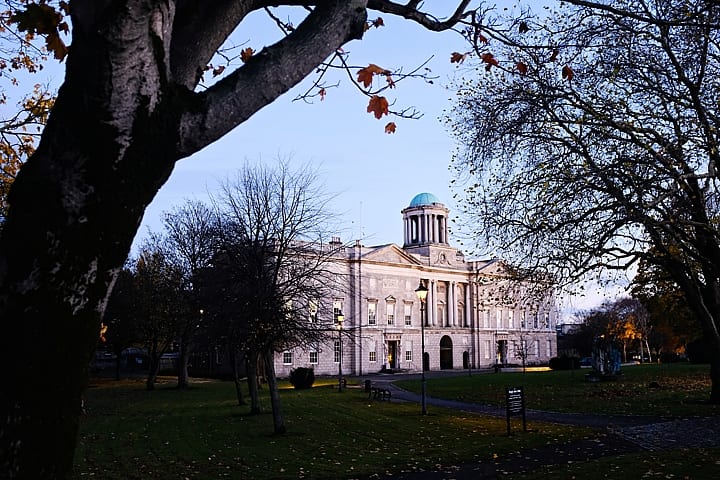 The next day I started where I left yesterday, wandering through the downtown’s streets. Exploring a new city located on the western hemisphere by myself was something I haven’t done in a long time. It resonated the time I stayed in the US, where I did that regularly. 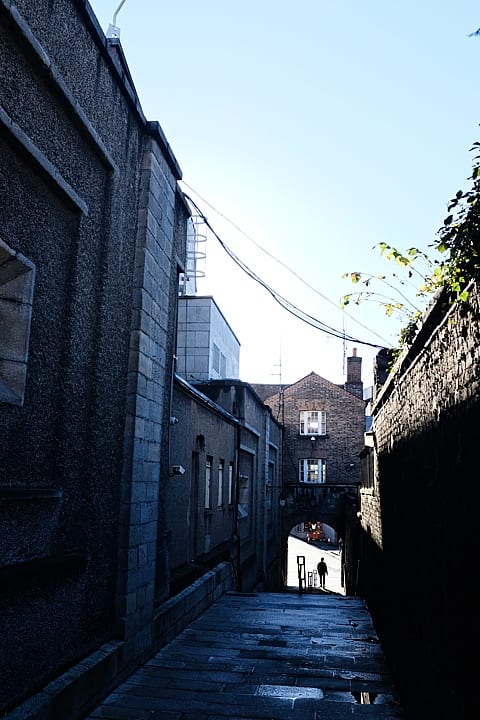 The sky was crystal clear, and still soaked surfaces caused every street to look like an arranged movie set, and every pedestrian like a model.

I saw the old city walls from 1240, another neat park, and the Dublin Castle: Behind the castle is yet another beautiful garden. It doubles as a heliport, and has many neat places to have a chat or just to rest. 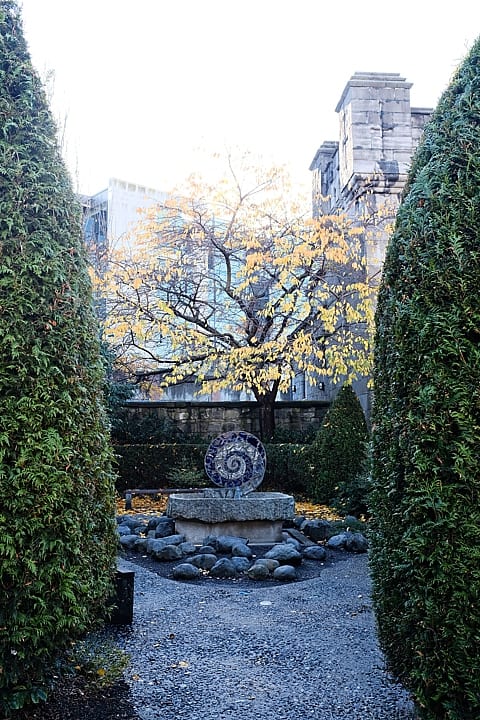 While walking around this morning, one could hear churches’ bells ringing almost constantly – which brings me to the other thing I wanted to do on this day, visit some of the cathedrals Dublin has to offer.

There are a few interesting ones, but two are standing out. The Christ Church and St Patrick, both erected in medieval times. It never cease to impress me that these buildings are so old, yet more elegant than many that are built nowadays. Another astonishing feature is the amount of history, wisdom and power attached to these temples. Looking at the stone walls is like reading a book.

The rest of the afternoon I had for the Guinness Storehouse. This turned out to be more fun than expected as coming here after visiting those cathedrals provided an unexpected twist in the experience. Turned out, both institutions actually shared a lot in common. Same as in the St. Patrick’s cathedral, the Storehouse also welcomes the visitors with a range of merchandise. But more importantly, when you move on to see the building, you’ll find a big sign: “The essence of Guinness is all around you.” Later, there are many other quotes, where if you’d replace the word “Guinness” with “Spirit,” they would work rather well in a church settings. This was genuinely entertaining, mainly on the floor which is dedicated to Guinness advertising. Watching all the people sharing the values presented by the brewery, taking selfies with pints and celebrating this religion of beer, brought back the “what’s important” inner dialogue from earlier.

Leaving all the philosophy behind, I have to say that the Storehouse is a cool place, where the visitors can learn about the process of making the Guinness’ beer, but also about the impact of the brewery on Dublin, through a well executed installation.

And above all, visitors can also visit the Gravity bar, a lounge sitting above the Storehouse’s roof, with panoramic windows offering views over the city and beyond.

Looking at storms rolling over the hills down south, and recognizing places which I’ve seen in the last two days, good times. 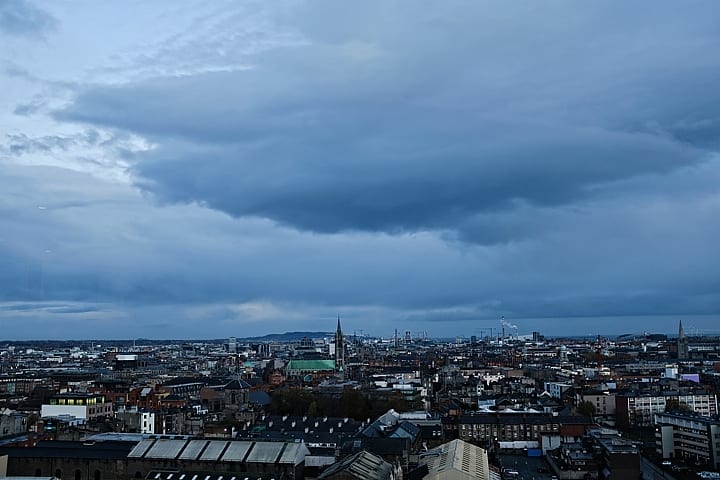 I left after the sunset, but before the complete darkness – So I could enjoy the streets nearby with a still-present sense of blue in the sky. 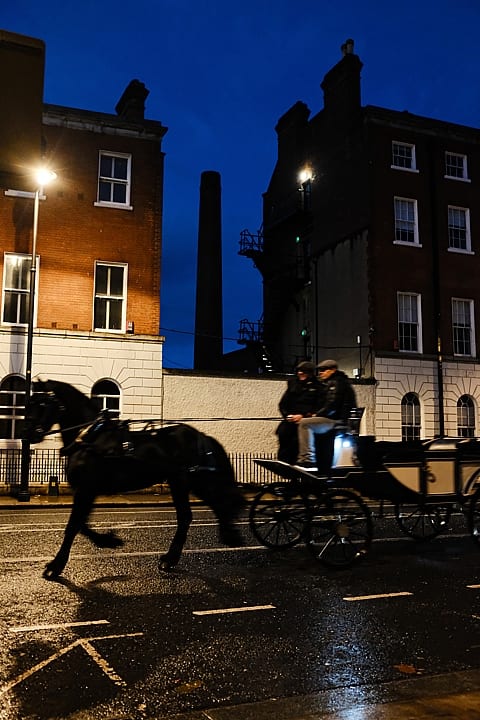 Shortly after this pic, it was night again. But once more; who knows when’s the next time I will be in Dublin? I don’t, better make some use of it. With this in mind, I went for a another walk, this time exploring the area around the docks. 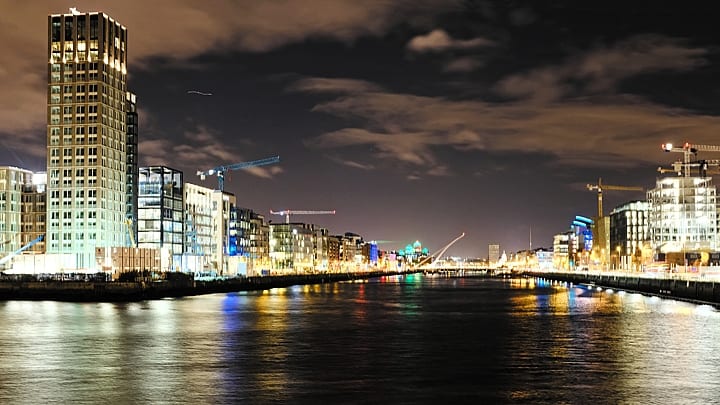 The following three days were occupied by the conference. It was the first one focused on academic research that I’ve attended – so, while I am not new to conferences, I wasn’t sure what to expect. It turned out great: some of the presentations were thought provoking – whether due the topics, or because of the specific speech patterns and persuasive method the speakers used. (Those skills gained while in mass media industry kicked in hard, at times.)  It was also grand to be surrounded by people from all over the globe; who, by the nature of the work they do, are good at arguments. This resulted in good discussions – whether it was debating somehow controversial issues, or friendly chatting about locations, cultures and values. Did you know that every building in Singapore has its own post code? And so on.

The event took place in a convention centre, which is a part of the Crock Park, a massive stadium for Gaelic games.

On the third day of the conference, we moved to the Trinity College… 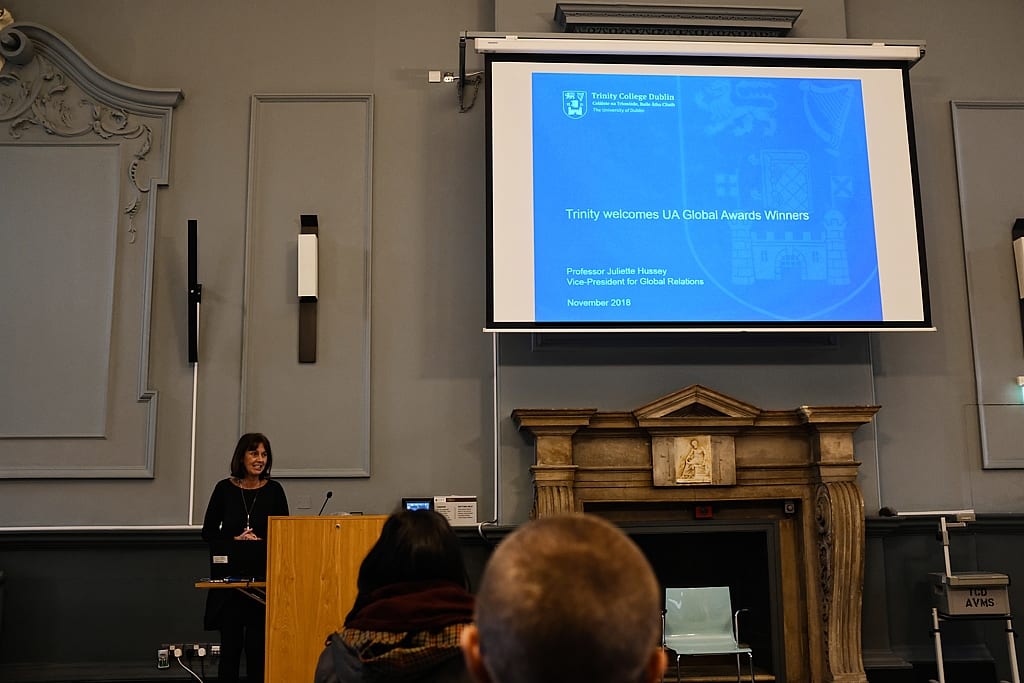 …where I had a chance to speak with the staff, and to see some of their buildings from the inside. The most memorable was the Book of Kells library. It’s a bibliophile’s heaven, and it’s one of Harry Potter’s filming locations. But even if you aren’t into the two, it is amazing to visit. 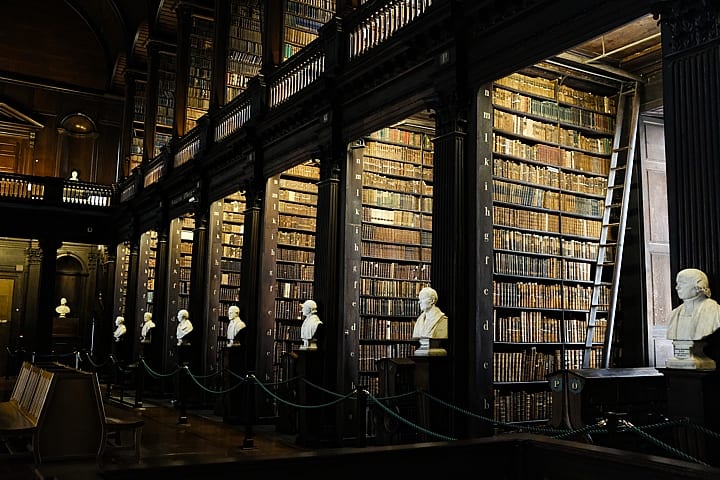 Time flew, the conference was suddenly over and I was going back to my hostel for the last time. All stories come to an end, such is life. But having my flight back home booked on the next day’s late afternoon allowed me to say dignified goodbye to the city.

I visited last few exhibitions, and went to check out the Phoenix Park – the largest enclosed public park in any European capital city, a calm sanctuary with many compelling sights, such as the Wellington Monument, a 62m /203ft tall obelisk. But my favorite part was just the sheer amount of greenery all over the place. 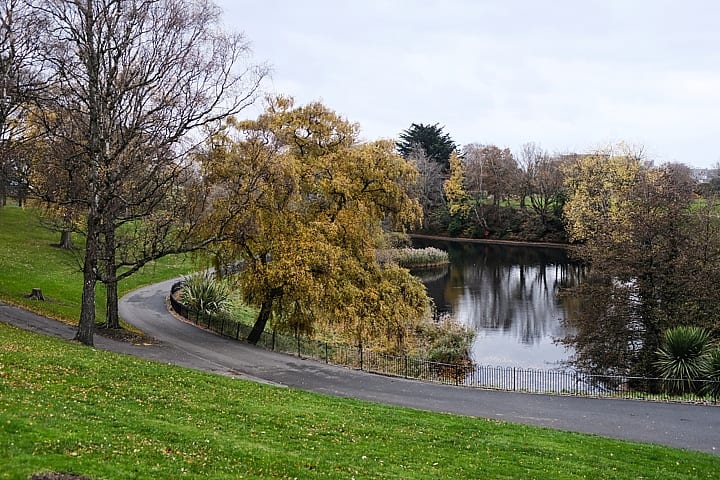 I also realized that in the floods of excitement, I forgot to ask someone at the conference for a picture of me. Leaving Dublin without one? So I took a selfie to fixed it. Then I walked through the downtown for the last time… 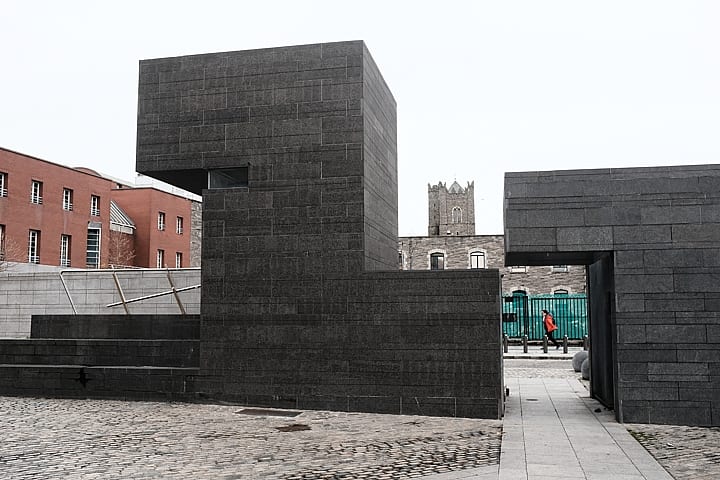 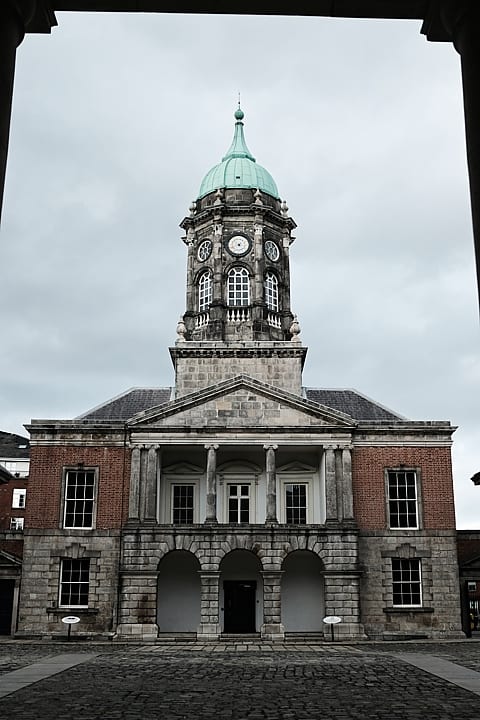 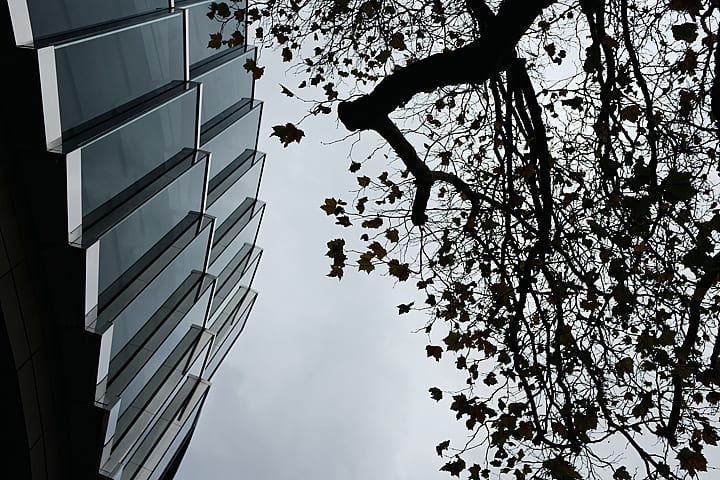 ..and that was it. Dublin left me with an impression of a vivid, relatively compact city with a variety of attractions and interesting people to chat with. I left Dublin with a desire to come back one day. 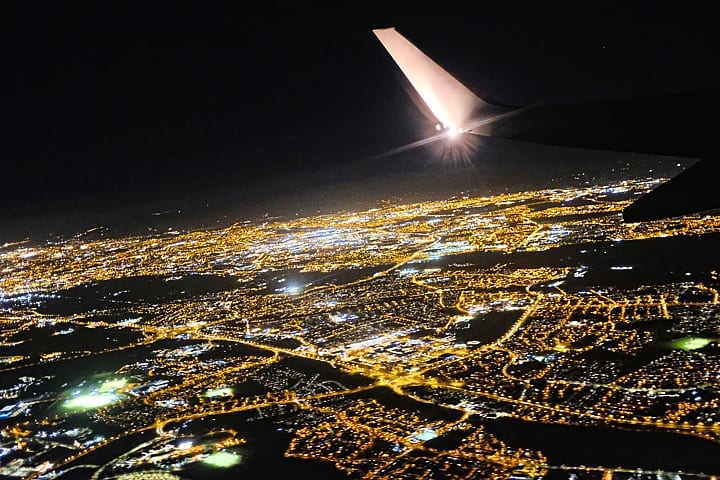 Massive thanks goes to the DJCAD, University of Dundee, who made this trip possible.