We all know the feeling of having weekly episodes of your tv show to watch but having to force yourself not to because you have studying to do, or an assessment due. Scrolling through your social media and having to flick past any spoilers because you are still a few episodes behind. Sticking your fingers in your ears and singing la la la anytime someone starts talking about the show. Well now, it’s over! Today is the last day of official exams of the semester and you can now watch the tv you want without feeling too guilty. Maybe you already have shows to catch up on, but if you want some new binge-possible shows, check out some that I have discovered down below.

I must say this list is very BBC heavy, because quite honestly they are so on point with their shows right now! And if your still in Dundee, the library has a TV license so you don’t have to miss out as you can watch them on iPlayer. 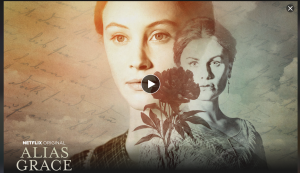 Set in 19th century Canada, this 6 episode limited series focuses on Grace Marks being studied by a young American psychiatric doctor to determine whether or not she should be pardoned for a murder which she does not remember committing, or if she is lying about her amnesia. Throughout the episodes you are taken through Grace’s life from her point of view as she is telling her story to the doctor, and instantly you are enthralled and want to know, did she or didn’t she? You begin to speculate as the episodes go on, build your own theories, and get so easily absorbed into the Alias Grace world. Going at a quick enough pace that you are desperate to watch episode after episode, you could watch the whole series in one day. 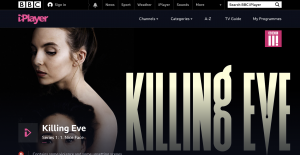 A thriller series in which a security operative of MI5 hunts down an international assassin. That’s the blurb on BBC, but it is so much more than that. There is feeling, creativity, incredible acting, and multiple emotional journeys. Sandra Oh plays her part of Eve, the security operative, incredibly, in a way that you could never imagine anyone else playing her role. She gives the character of Eve a real human feel to her and we experience her suffering and joy, funny moments and sadness, all of which are portrayed fantastically. Jodie Comer who plays the assassin, brings a character to life who you should root against but end up feeling for her and half rooting for her instead. The writers of this show were first class, providing amazing story, dialogue and settings. A must watch of 2018, with only 8 episodes, it’s an incredible binge-watchable show 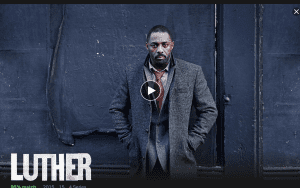 Now since the theme of these are binge-watchable shows to catch up from in 2018, it might seem odd that I am adding a show which first aired in 2010 and has 4 seasons, but Luther is special. A nitty gritty bbc detective show, set in London, with only a maximum of 6 episodes in each season, Luther is very easy to binge watch. Each baddie is introduced in a first episode and that particular storyline is concluded in a second episode. Because of this method of portrayal, you watch two episodes, at least, always together because you don’t get a choice in finding out what happens, you just have to find out when the writing and acting is so compelling. This isn’t like a lot of cop shows because first of all it is very real and a bit on the dark side. DCI Luther isn’t your typical lead detective, but a man who does whatever it takes to catch the baddies. There is wonderful character development which happens in a relatively short time (as far as tv series go) throughout the 4 seasons, as well as some wonderfully portrayed real life hard decisions and emotions. You then have the excitement and drama of a good detective show. What makes it a must watch of 2018, is that the newest season (which has been anticipated for years) airs on New Year’s Day!!! I certainly can’t wait for season 5.