The last 3 months have challenged me in ways I have never been challenged before. Working in a large multinational fast-moving consumer goods (FMCG) company has taught me lessons I never thought I needed to learn. Before I go into those, I will give you a short background on my role. I worked as a manufacturing engineer in the Gillette plant. My role was mostly around optimising different systems and standards to at the end of the day, save money.

During every summer I have been at university, I have always had an internship, however, my last two internships were all in the private sector – which if you didn’t know is more concerned about improvement for the public and there is not too much focus on the bottom line. In essence, these internships have been more relaxed and I had been given time to ease into things.

Working at P&G was nothing like working in the private sector. Only 1% of the people who applied for P&G internships were offered a role, so from the moment you walk through the door they expected you to be excellent and nothing less. 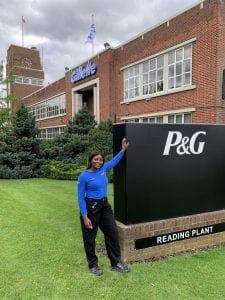 So here are the top three things that became obvious to me:

1. How long you spend working doesn’t matter – it’s your results that count
Let me be honest, I have always believed that time put in = results. The more time you put in the better results you get. Over the few years at university I have started to discover that this is not true, however, my internship was the real turning point. I was given tasks I needed to achieve and deadlines to meet them at. At first, my attitude was I have enough time to achieve this within my working hours because nobody will give me work that would take more than my working hours. I had a rude awakening when midway through my internship I was not where I was supposed to be AT ALL. I mean I had worked all my hours but it had not produced the results it was meant to. At this point in time, I started taking time to think about the most efficient way to carry out tasks and actually delegating certain tasks to other people. I realised that sometimes making a document I have produced a little prettier was not worth it as I could be spending that same time closing up a project that will save the company thousands of pounds. Prioritising based on the bottom line is the way to succeed in the private sector.

2. People are your greatest asset – not yourself

Coming into my role I had imposter syndrome. I know I had worked hard to get there, but honestly still felt like there would be someone better out there for the role. The honest truth is that there were probably hundreds or even thousands of people out there that could have done the role better than myself. Regardless of that, I was the who got it and I was the one who needed to make the impact. Working the truth I discovered is that the real key is not in how much knowledge you process but it’s in how well you are able to use other peoples knowledge and experience to achieve your tasks. So I don’t need to be technically savvy or intelligent. All I need is an eye that is looking for opportunities that feedback into achieving my goals.

3. Think about what really matters – not what anyone else thinks

I know that probably sounds very cheesy but it is 100% the truth. Working in an environment where you are the least experienced and knowledgeable person often means you are on your toes and want to prove yourself. I will give a specific example. Most engineers on the plant got to work at 7:30 and on my first few days I needed to as well. However, my sleeping pattern had not yet adjusted to getting up that early so I was tired every time I came in and this of-course hindered my productivity. When I came in that early people probably thought ‘oh she’s dedicated, she’s coming in early’ but at the end of the day that wasn’t really helping my projects because I was tired.
I was at a bit of a cross-road, I could try and get to bed earlier (which for me was possible but also near impossible) or I could come to work an hour later. At first, I tried going to bed earlier, but that was really unrealistic. After a while, I had just burnt out and needed rest so one day I came into work later but rested and that was an extremely productive day. I thought everyone would be talking about how I was lazy but they were not, they were too busy doing their own thing the best way they would and that’s what I should have done all along.

So this has been a rather long post but these are genuine lessons which have changed the way I approach things. If you are considering doing an internship, please try, its a great way to learn more about the world and yourself.