My First Semester in the Dance Club

Throughout my university experience, I have focused on my professional and academic goals and have never made any commitments just because it was ‘fun’. Whist in first year I had the pleasure of going to one of the dance club shows and was really impressed by the quality of the production and talent showcased . Ever since the show I wanted to join the club although I had little to no dance experience but would never give up on an opportunity to play Just Dance.

At the beginning of every year, I felt just too preoccupied to chase it. Something was different this year I was committed to having a good time. I attended most of the ‘Give it a go’ dance classes which are basically trial sessions for the club. When I went to the sessions I was surprised that almost everyone had danced before – it was clear because they all got the moves and techniques easily whilst I helplessly threw myself around in confusion. This did not deter me though, I decided that if I was surrounded by people so talented I had no choice but to learn.

After the trial sessions were over, the club had auditions for the competition teams which as the name implies compete for the university. My desire to excel at dancing was so strong that I actually wanted to audition for the hip-hop competition team – thankfully I had a trip planned on the same day as the audition and saved myself from another bit of embarrassment. Honestly, I started embracing that I was not great and I did not know all the moves and started focusing on my progress and practising at home. I finally got the courage to show my friends some of the videos from the classes (because yes every class/rehearsal is recorded and posted). My friends laughed at me and honestly I didn’t blame them, but what they did notice was improvements from video to video.

The club is also very active socially, however, I did feel a bit out of place even though everyone is so friendly. I then decided to go for the welcome night which was great fun and as expected everyone was so welcoming and nice. They have socials practically every week which I think is a great way for the team to bond. After a semester I have been able to come out of my bubble a bit and find it easier to socialise with other people in the club. Just a side note: I was shocked that I was so shy because by no measure am I a shy or reserved person. What I believe happened was that I was not confident in my abilities which made me pull back. So far, it has been a great opportunity to develop my confidence in a different way – being confident in confusion. The experience has also humbled me so much and taught me how to push through for what I really want.

In addition to the classes and rehearsals for the show, I also had the pleasure of doing the Brave Run – a charity obstacle course organised by the university’s Institute of Sport and Exercise. It was so much fun, especially going down the soap slide! 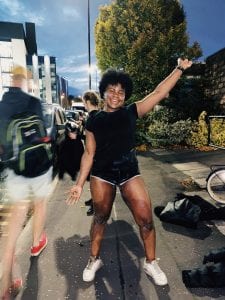 Despite difficulties, I am so glad I have joined the dance club and I am so excited for our show that will be happening at the end of the semester you can follow the club on Instagram @dundeeunidanceclub.