The 27th of January was International Holocaust Memorial Day, a day dedicated to remembering the 6 million Jews who were murdered by the Nazis during the Holocaust.

This year, Holocaust Memorial Day marks 75 years since Auschwitz- Birkenau, the largest of the Nazi concentration camps, was liberated by Soviet soldiers in 1945. 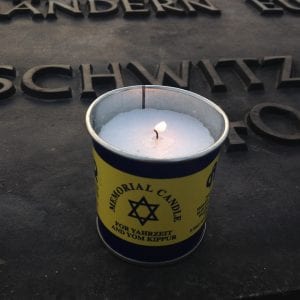 I had the opportunity to become an ambassador for the Holocaust Education Trust during my last year of high school, through the Lesson from Auschwitz project. The project was orientated around honouring the victims of the holocaust, and increasing knowledge and understanding of the Holocaust in my local community, by highlighting what could happen if prejudice and racism again become acceptable in society.

Training to become an ambassador involved numerous seminars with Holocaust survivors, a trip to the former Auschwitz Birkenau death camp in Poland, and delivering a presentation to my school to share my experience. 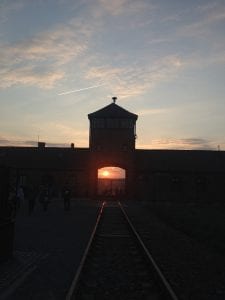 My trip to Auschwitz was overwhelming. 85% of those sent to the death camp were immediately murdered, while the other 15% were dehumanised and forced to work in subhuman conditions. I found Auschwitz II (Birkenau) particularly horrifying. The sheer size of the camp, and the fact that there were plans to multiply it, reveals the scale and industrial nature of the Nazis death camps. It’s so hard to imagine the numbers of men, women and children who suffered there.

It was this experience that encouraged me to study history. You’ve probably already heard the quote “what we learn from history is that we don’t learn from history.” It’s so true. The holocaust happened less than 80years ago, and since, there have been numerous genocides. In a world of anti-Semitic intimidation, and ideologies that spread intolerance and hatred, lessons learned from the Holocaust are so relevant today.

Each year that goes by, the number of those who survived the Holocaust become fewer and fewer, and therefore it is so important that we keep their stories alive be spreading awareness of the horrors of the Holocaust, in order to ensure that history never repeats itself.

It’s almost impossible to imagine the scale of what really happened during the Holocaust. To put it into perspective, if we held a minute of silence for every holocaust victim, including the Jews, disabled, homosexual individuals, and children, we would be silent for 11 and a half years. It’s so important to speak out against intolerance, and to challenge anti-semitism and racism of all kinds.