The cliché of joining the university feminist society after a bad break-up isn’t lost on me. Neither is becoming president. And sure, it might have been the catalyst that made me all feminist and angry again but if I’m even more honest, I always was.

The first time I noticed that there was a difference between boys and girls, I was sitting in a hospital waiting room. I don’t know why I was there or what age I was exactly, I couldn’t have been more than 6. I only remember one thing: the outrage that girls were “banned” from having Yorkies after seeing the packaging in the little shop of St John’s. I was old enough to question it. I remember asking my parents if there was some kind of health motivated reason why girls weren’t allowed to have that kind of chocolate and wondered if I would be turned away if I went up to buy one myself. When my parents reassured me that I wouldn’t, in fact, die, I remember feeling the injustice in it. I didn’t understand the warped justification in the choice of advertising, all I knew was that because I was a girl, I couldn’t have that chocolate bar. As minimal as the case for chocolate might seem now, it was the first time that I realised that boys and girls weren’t the same and had very different rules to follow.

If you learn anything from this, let it be that I take Yorkies seriously or I suppose that this was my first, tangible experience of gender inequality. it certainly eased my way into a lifetime of it. From that moment on, I believe that my fate, as a feminist and an activist, was locked. It’s funny looking back on the moments that inevitably define you as a person. I never thought that one of those moments would be about a Yorkie but here we are! You can’t choose the moments that make you. I didn’t know the impact a defenceless Yorkie would have on me nor did I foresee the impact of  the novels I grew up reading and the characters I discovered there; Jane Austen’s Elizabeth Bennet and Emma Woodhouse, Suzanne Collins’ Katniss Everdeen and J.K. Rowling’s Hermione Granger and Luna Lovegood would become my friends and feminist icon inspirations. We are all a combination of the books we read, the films we see and the experiences we have.

I was raised by parents that gave me every opportunity to use my voice, even at the end of a taxing day when the last thing they wanted to do was listen to me rattling on, again. I was always older than my years and have always thought in a similar way. I was well-behaved but opinionated. I loved to be heard and would tell stories any way I could by writing then down, presenting made up TV shows or chatting your ear off over the dinner table. Despite growing up alongside me, reading and watching many of the same books and films, experiencing many of the same things as I, my sister and I couldn’t have been more different. My rebellious and free-spirited sister might have worn many of the same clothes but her spirit and outlook were very different. While I preferred to make friends with the characters I read about, she would create them from the experiments she concocted in our room. While I wrote them into stories, she would draw them on our walls. While I would march around in my Princess dress , she preferred to be a fearsome ( but equally adorable ) pirate. These days, we continue to share more than our wardrobes, it is the differences between us that I treasure. Those differences have led her to DJCAD where she is using her natural talent for observing the world, its beauty and its injustices to make a statement of her own. While I am here, using my voice in a much more literal sense- studying politics and languages, writing blogs and articles and as president of the Feminist Society.

My parents asked me recently if I thought I had a sheltered upbringing, if i felt overprotected from the uncaring world around me. I laughed- of course I did. I was raised in a suburban dream, the ultimate idyllic childhood topped with storybook characters and a garden to play in. I got to grow up believing in the Tooth Fairy, Santa and with the idea I could do anything I put my mind to. It’s the childhood that every child dreams of and should have. I was lucky. I grew up always feeling that my voice mattered, my opinion meant something and that people wanted to hear it. Little did I know that that was a luxury.

I’m not sure when I fully understood what a feminist was, what they do and what they fight for but it must have been somewhere between sporting princess dresses and the Yorkie fiasco. It’s the first time I realised that nobody HAS to listen to you, you have to make them. It was one of the first times I realised that there were greater injustices in the world than a sexist chocolate bar and there were bigger causes to fight for.

So, when the opportunity presented itself to take over Fem Soc I had to take it. I had been interested in joining the society ever since I had started university but always found a reason not to. I had been teased mercilessly at school for branding myself as a feminist for whatever reason. The term always seemed to be taken to mean more than simply thinking my voice should be valued the same as anyone else’s. When I was dating, I felt I never had the time to be in a society but when last January rolled around, I had run out of excuses. All I can say is that I am so glad I did.

So, clichés might be the there for a reason. My year with Fem Soc has undoubtedly been one of the most empowering experiences of my life. It started in January with a group of 5 women who were brought together by the same thing that had pushed me to towards Fem Soc in the first place. Together, we revived a dormant society with film screenings, debates, socials, “fight clubs” and clothes drives. I talk a lot (didn’t really need to finish the sentence there, that’s already true) about how writing blog posts over the last year has been the empowering project I needed but I haven’t given Fem Soc the full credit that it’s due.

Being the president of any society is a huge responsibility, there’s always a Pub Quiz to organise or another social to be had! Yet, leading a society like this- that is based on values that are so integral to our community and campus- the weight of that responsibility is that much more. It’s ensuring that every member has a voice and the opportunity to be heard. It’s been a pleasure seeing that luxury that I was fortunate enough to experience as a child only grow here.

On a personal level, Fem Soc has meant to much more to me. it’s meant making friends with all kinds of inspiring people and hearing about the people they are- the books they have read, the films they have watched and the experiences that have made them. I will be truly sad to leave it but I am grateful for every person, every lesson and every moment since although we can’t choose the moments that make us, we can have a say on how they do. 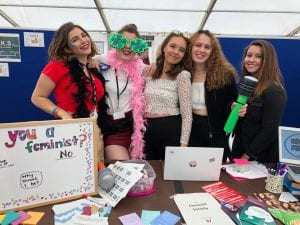 If you would like to be the next Fem Soc President, committee member or simply, want to be more involved with the society- come along to our AGM to find out more or check out our Facebook page for upcoming events.