I have always wanted to get involved in working abroad and helping others that are less fortunate. This was where my interest in Civil Engineering lay. I looked up many NGO’s and charitable foundations which get involved abroad helping to develop communities and provide those with basic facilities which you and I may take for granted.

This is also why I chose my dissertation project to investigate the Earthquake-induced Liquefaction in Palu Indonesia. Over 4300 people were killed by an earthquake which caused the ground to turn into a liquid and disfigure the whole town into rubble.

After Earthquakes occur, an Earthquake Engineering Field Investigation Team (EEFIT) is formed from Civil Engineers, structural engineers, geologists and specialist personnel to be sent out to investigate the extent of the damage and how it occurred. Reports are usually compiled from the data and this is where I have continued the investigation into why the liquefaction was as bad as it was under conditions that would have been expected not to have caused such a large flow of liquifed soil.

I found research into this matter really interesting, as soil behaves in interesting ways.

I have known about Engineers Without Borders since my time at highschool and have followed a lot of their projects. They are a registered charity and NGO that leads a movement to inspire, enable and influence global responsibility through engineering. They have over 60 organisations around the world and have many committed volunteers and fundraisers to provide important projects to those in need.

They have a variety of projects and also contribute inspiring practising engineers, and engineers of the future, to apply their skills to make positive contributions to the world. They provide off-grid renewable energy in Kenya and east Africa. They re-engineer urban spaces to provide development to communities such as in Kibera which doesn’t have enough toilets or adequate flood defences. When it rains heavily, homes are damaged and raw sewage mixes with drinking water supplies, spreading disease. Flood defences have been improved and polluted waste grounds have been transformed into playgrounds and market squares. They run many many more projects which are improving the daily life of millions.

RedR UK trains life-savers by giving people the skills to be ready for, and respond to major disasters like earthquakes, floods, conflict and drought. They run many training courses for staff in companies around the UK and provide them back to those in 3rd world countries who can develop their experience. 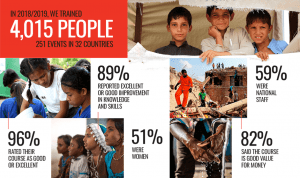 They work within Climate Change and Disaster Risk Reduction by training and supporting humanitarians working in regions threatened by climate change.

Funded by Lloyds’ Charities Trust, RedR UK is implementing the ‘Ready to Respond’ project, aiming to increase the ability of individuals and organisations involved in humanitarian action to prepare for and respond to emergencies, especially in urban centres.

Many Engineering companies also run projects that help 3rd world countries. Such as:

Hopefully this blog was inspiring and insightful to some of you. I think in this day and age it is important to remember that a lot of communities are struggling still with basic sanitation, clean water and even a roof over their heads! It is always important to remember how lucky we are and that another skyscraper in the centre of London is not nearly as important that providing someone in desperate need.

“Humanitarianism implies a social conscience, a wish to do socially useful work, and to join hands with others fighting for the same values.” – Sir Ove Arup Engineer