Making an MTB loop on Skiddaw, a mountain in the northern Lake District.

The first mountain range I visited in the UK was in the Lake District National Park. It was in 2015, after years of living in flat areas of the Midwest and England – so being back in the mountains felt very special. The landscapes I witnessed there reinforced my focus towards Scotland, known for its collection of peaks, where I eventually moved.

Once I did, I had no motivation to travel elsewhere in the UK for outdoor adventures, as the ranges in Scotland are rather extensive. But, when I learned that the Uni’s hiking club is planning a trip to the Lakes, I thought it would be a good cause to re-experience the place. So I volunteered to drive them there while taking my bike to get a nice reminder of what the district is about.

I came up with a route that started in Keswick, a major town in the northern part of the national park, and continued up and around a nearby placed mountain Skiddaw. The visibility was good, and so I was able to see my goal right away.

Keswick lays at an altitude of ~80m, while the Skiddaw’s summit is at 931m – making it England’s sixth tallest mountain. That said, the road started ascending immediately behind the town, which opened pretty views on the ridges nearby. 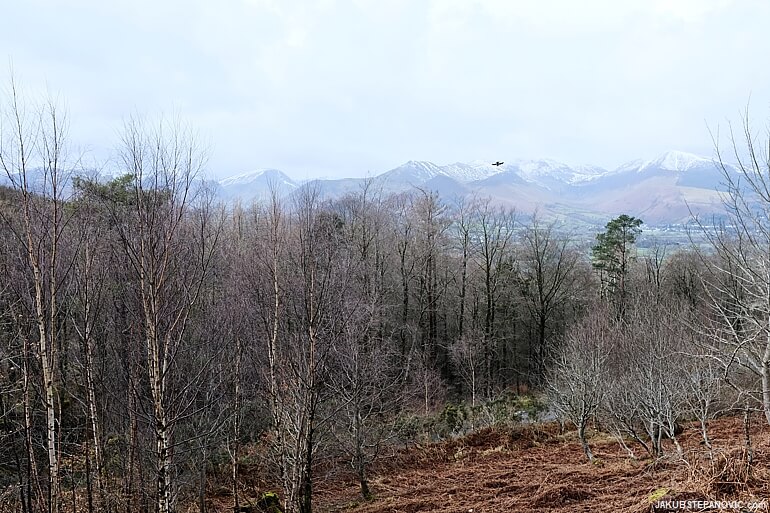 It was interesting to compare the local landscapes to those in Scotland. The Lake District was greener, had less of the rugged feel, while maintaining the prominence. 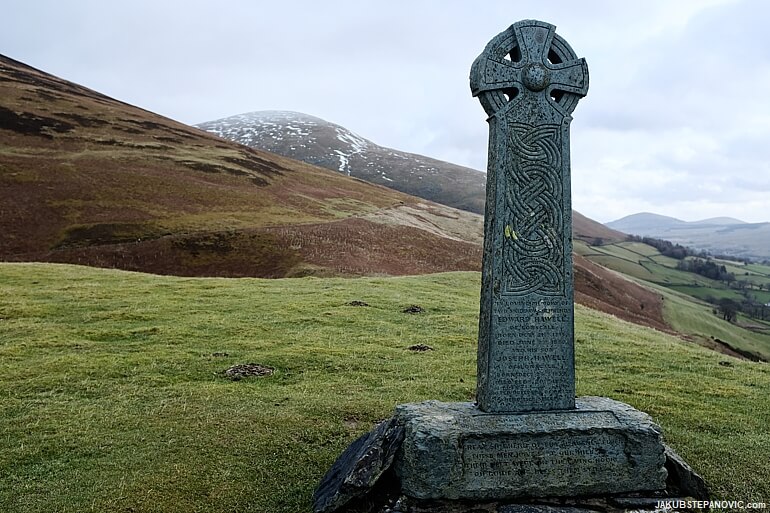 After passing this cross, the climb reached a new level: 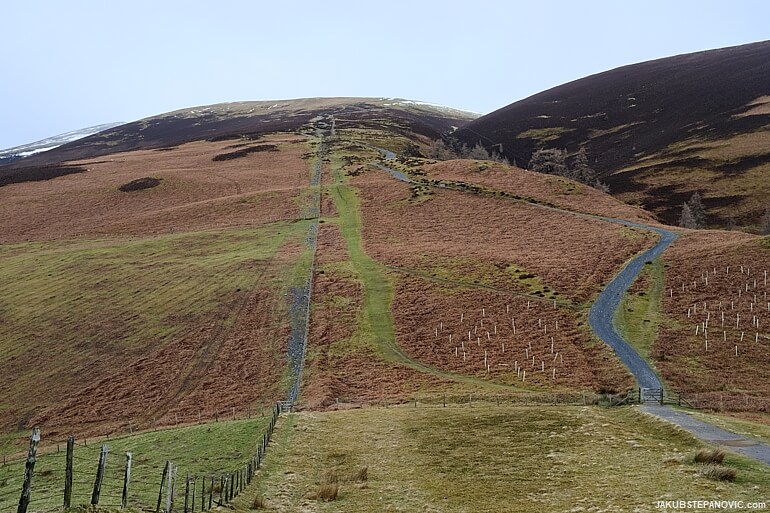 In the kilometre following after the gate, the path averages 25% incline gradient – talking about a proper leg-burner. But as the surface was good, it went all right. As the height increased, so did the quality of the views. At one point, I was able to observe a storm rolling down on Keswick. 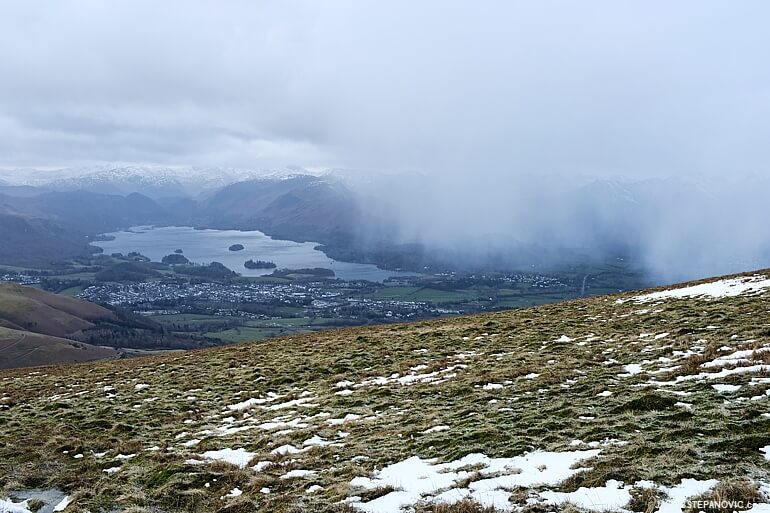 While the heavy clouds avoided the ridge, the wind didn’t. So while the incline wasn’t as steep anymore, the wind and snow patches on the trail kept me busy. At some 800 meters, snow was covering most of the surface around. 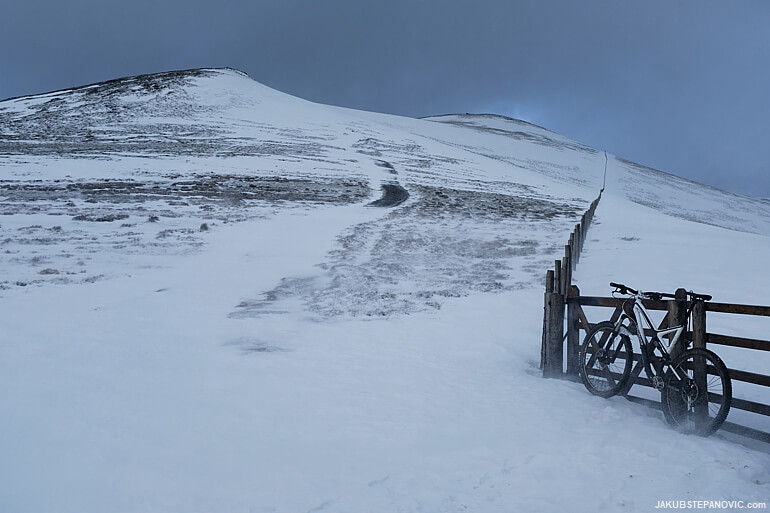 The trail I took follows a wide ridge to the summit. My plan was to use it for getting up the mountain and then descend by a different, narrow ridge down. 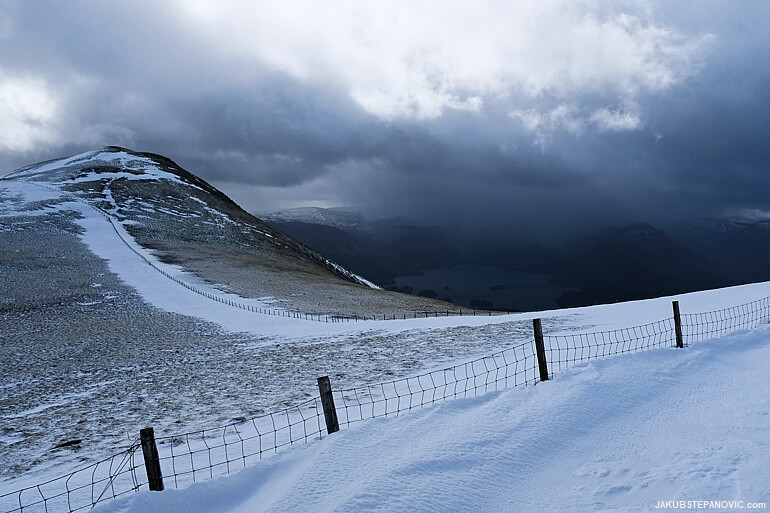 About 100 meters below the summit, the wind and snow made it impossible to ride the bike. Climbing a bit more, the surface changed to mostly ice, and the wind strengthened yet further. Now, I had to hold my bike even if I leaned it on the ground; otherwise, it would get blown away. I started questioning my progress onto the next ridge edged by steep cliffs, a place where I never been before. I decided that I would go for it anyway, carry the bike until the environment gets rideable, and then enjoy the downhill section. But then, some 50m below the summit, the winds brought a thick cloud carrying a massive hailstorm. 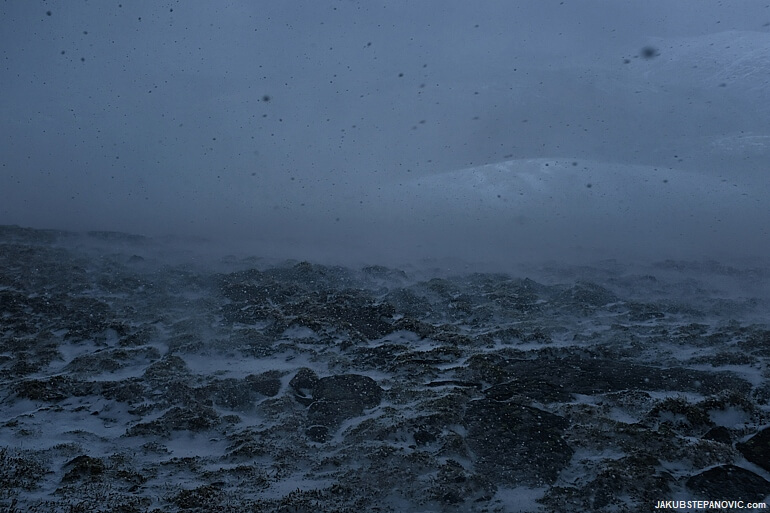 Temperature and visibility dropped, and the hail propelled by the immense wind made me thankful for the protective gear I had. All the pads, full-face helmet, and goggles proved to be a lifesaver when being bombarded by ice.

“Better to keep moving,” I thought while recalling stories from a member of the Skye‘s mountain rescue team. He told me about a case when people decided to outlast a similar conditions up on a ridge, only to get hypothermia and then not find a way down. “Okay, nature, you won!” I admitted and started heading back the way I came, by the wide ridge.

Going down was much easier than up, and before I got out of the snowy field, the hail went away, and the visibility returned. 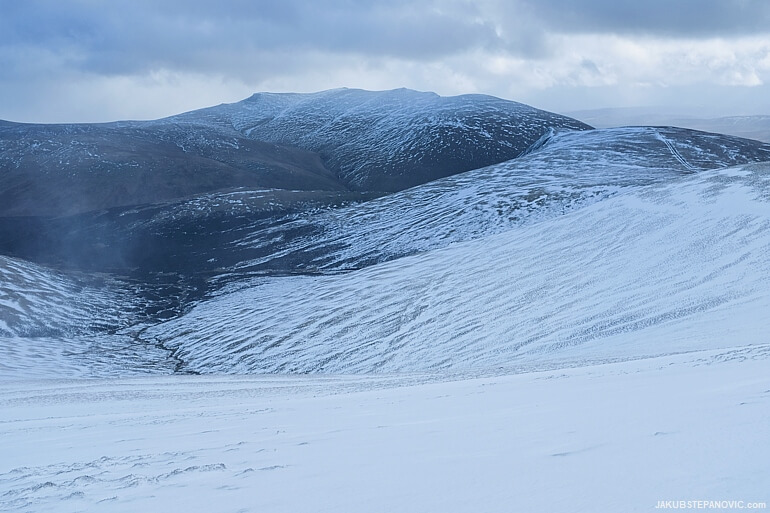 Soon after it happened, I was able to get back on the saddle. Happy me! 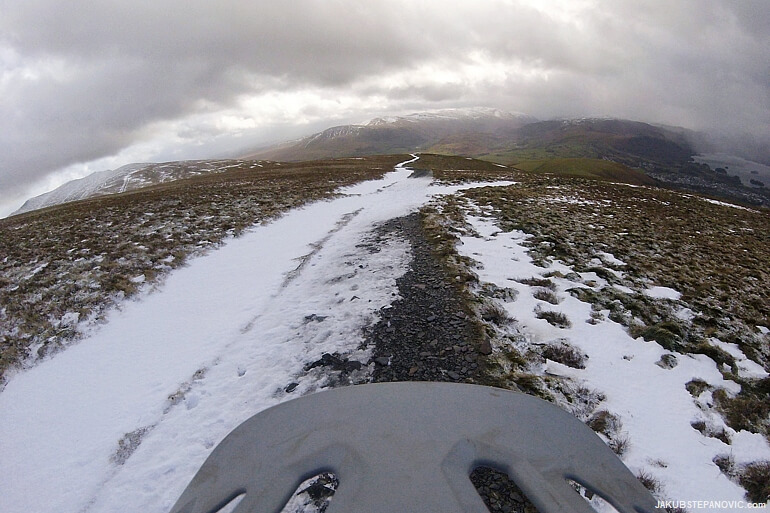 As the trail is spacious, without blind spots and rough sections, the descent was a piece of cake. Perhaps the most unexpected event of the downhill was how many people filmed me. In Scotland, I went down far more technical sections and I don’t recall anyone capturing it. Here, however, every other person did. 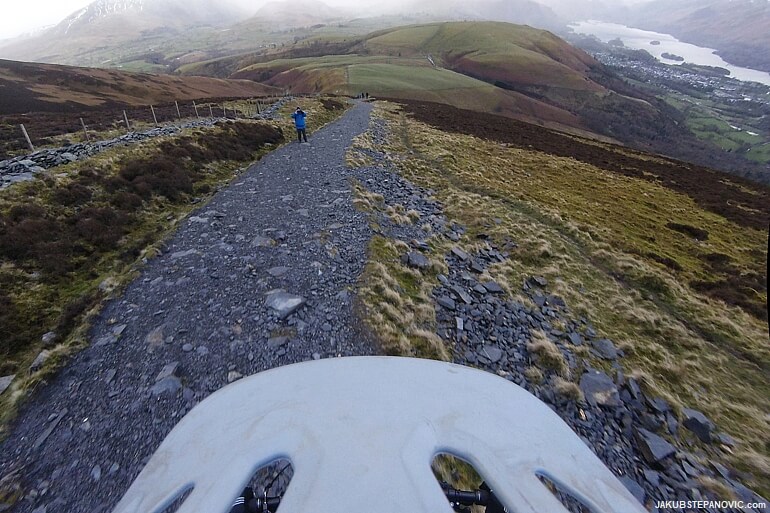 They either found it inspiring or weird. But, there were a few runners just in shorts and T-shirts – I thought they were more exotic than a biker; yet, I didn’t see anybody taking photos of them. Each to their own, I guess. Speaking of people, I am used from Scotland to greet fellow users of the trails. But here, very little said hi back. Maybe it is because the Lake District is more crowded, or people just don’t do that here. Either way, I felt a bit foreign. 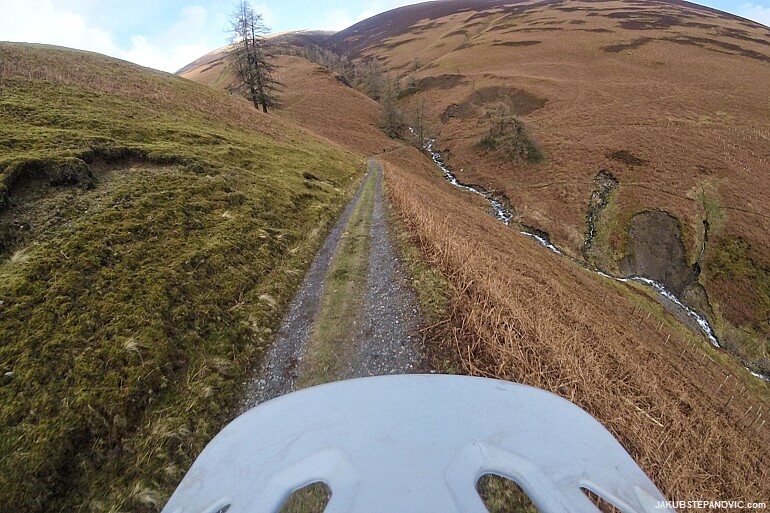 My initial plan was to get up and down Skiddaw, and then cycle around it. However, as I went down differently than planned, I took the loop from the other side than I intended. And just like that, I ended on a what turned out to be fantastic singletrack, an absolute joy to cycle through. Even though it started snowing on a bit exposed portion. 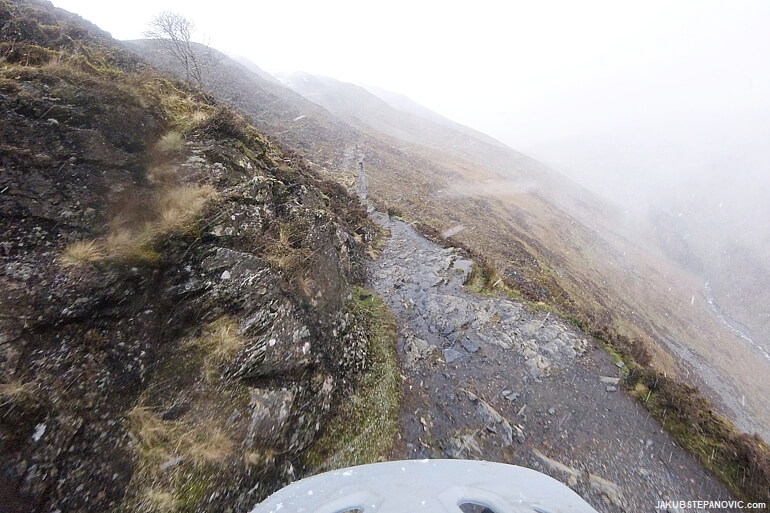 The wintry shower was nothing compared to the hail and wind I experienced earlier, so I kept enjoying the trail and all its surroundings. 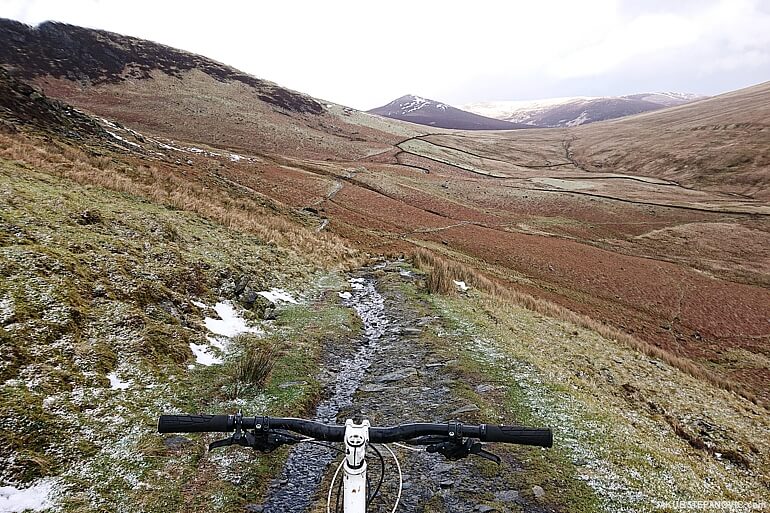 Somewhere half-way, I started hearing a concerning noise coming from the back of the bike. I stopped to have a look and noticed that the tyre began to rub the frame. It was because two nipples (the things that attach the wheel’s rim to the spokes) didn’t survive the cold and rocks, and snapped. “Maintenance intermezzo, here we go,” I started truing the wheel, so I could resume the ride. The right timing for another snow shower? Oh, you bet! 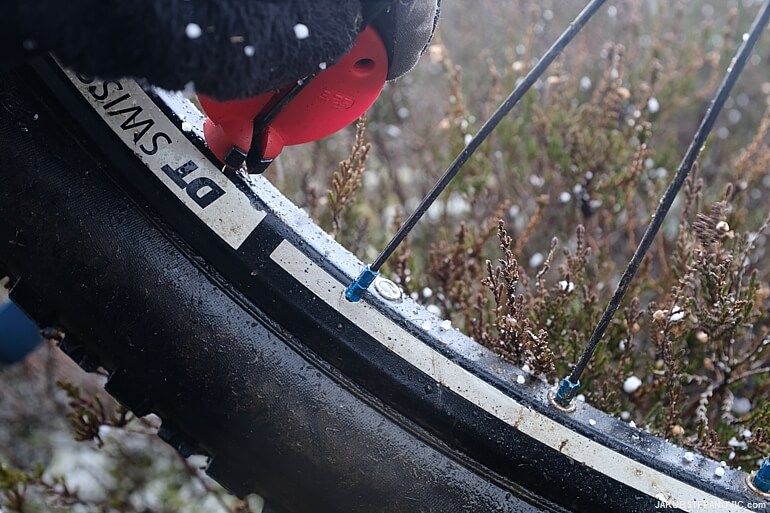 Once the wheel was in decent shape to keep going, I took it slowly and moved forward. The trail leads to the Skiddaw House, the highest hostel in England. One of the most remote ones, too, as the nearest public road is over five km away. 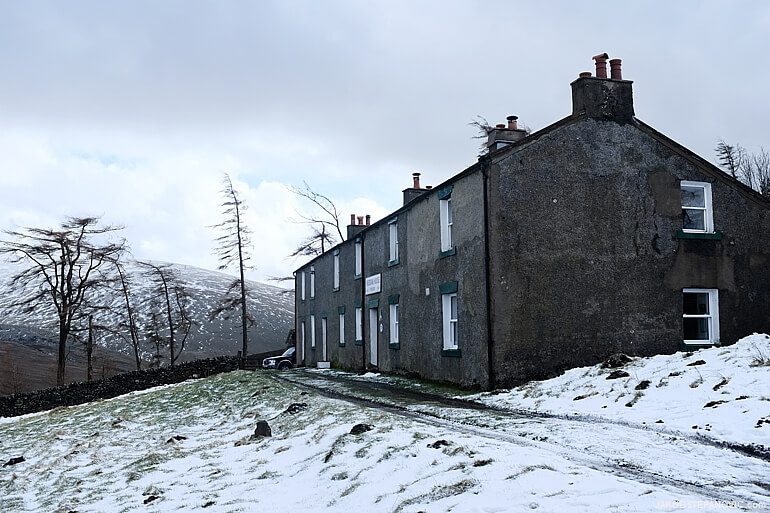 I thought about stopping by, but they are closed during the winter. So I had a snack and proceeded to see the other side of the mountain. 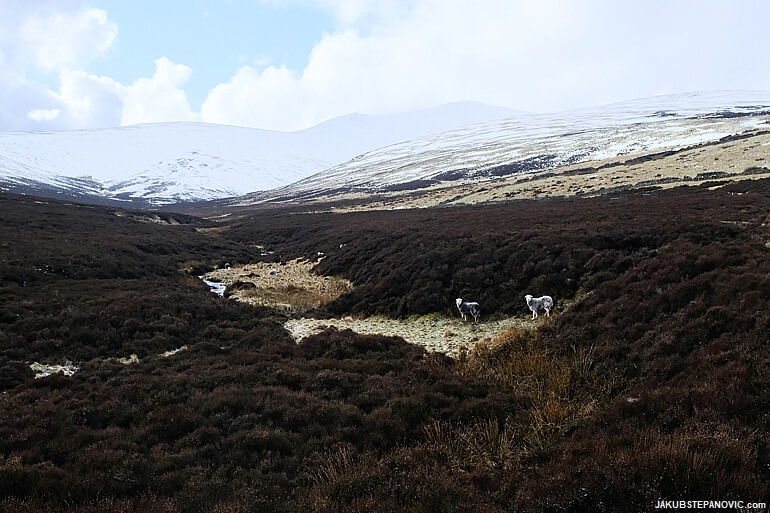 The path from here was wide and easy. 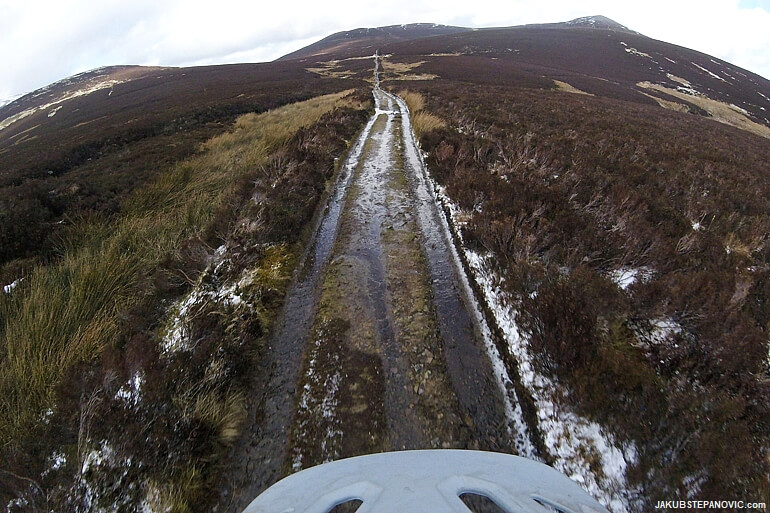 Conveniently, there was a footbridge over the one deeper river that crosses the road. 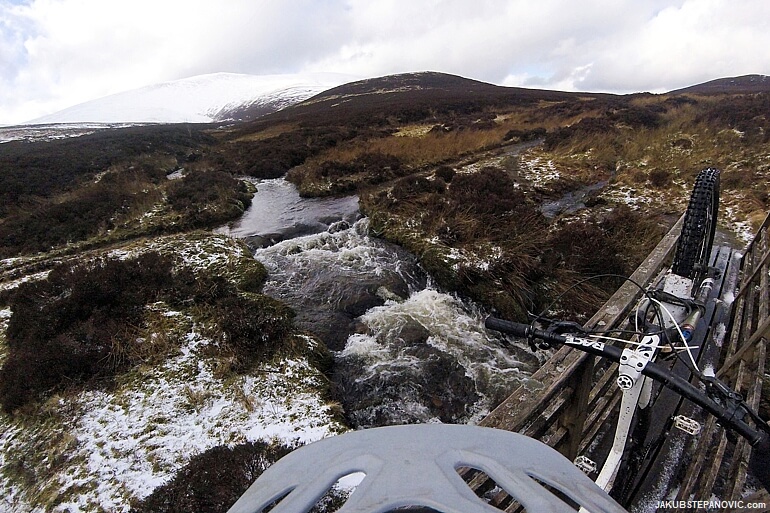 While the easy trail allowed quick progress, it was less entertaining to ride through than the narrow singletrack earlier. That, however, was offset by the scenery around. The pinnacle was to have this large waterfall next to the road: 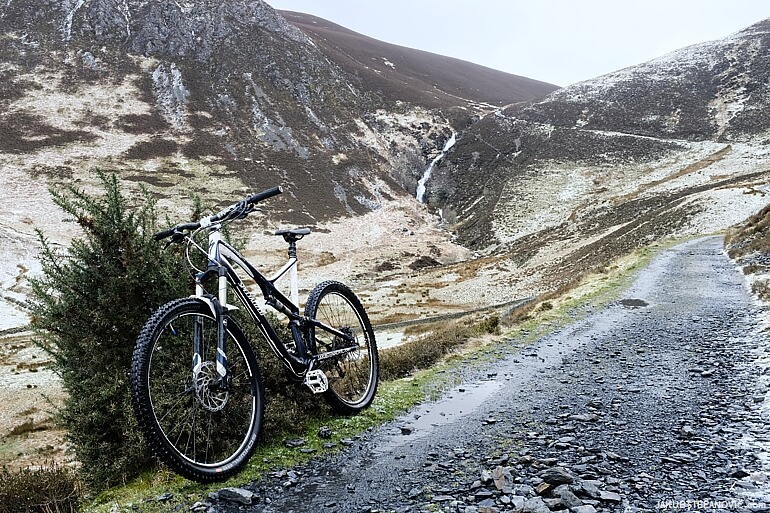 From the falls, the road improved even further. 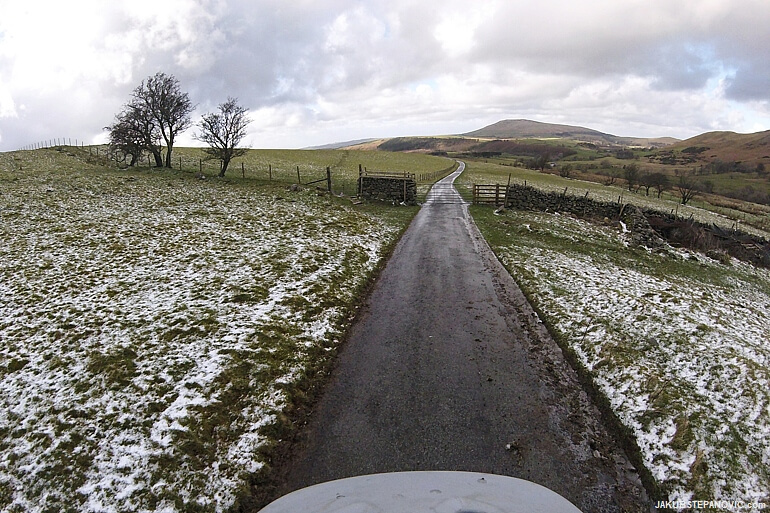 As I reached the opposite side of the mountain, the narrow ridge that I wanted to ride down came in sight. Looking at it while seeing the clouds above moving at high speed, I didn’t regret that I gave it a miss this time. 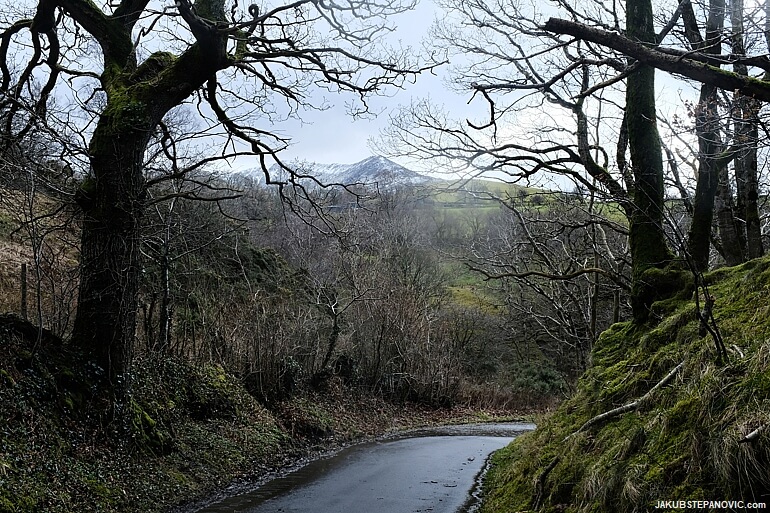 The route back to Keswick is lined with pretty lakes, and there is a forest path parallel with the main road, allowing to keep away from the car traffic for a bit longer. 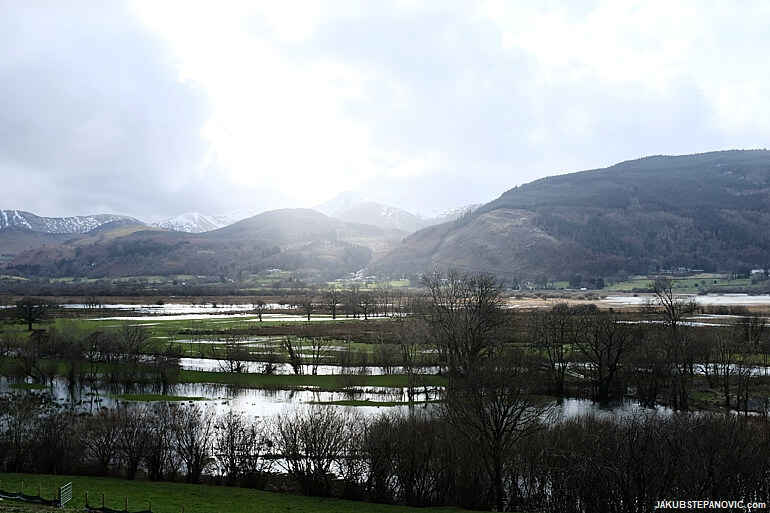 Once I returned on the Keswick’s side, the familiar view on the Skiddaw ridge came back.

Since the weather was decent and I had plenty of time before the evening, I decided to extend the trip and continue a bit past Keswick, where’s this Neolithic stone circle: 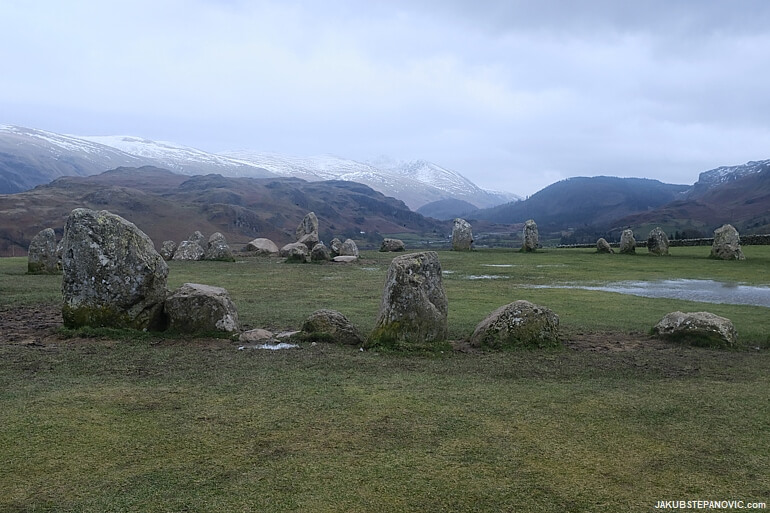 It was a good shout, as the site is indeed beautiful. 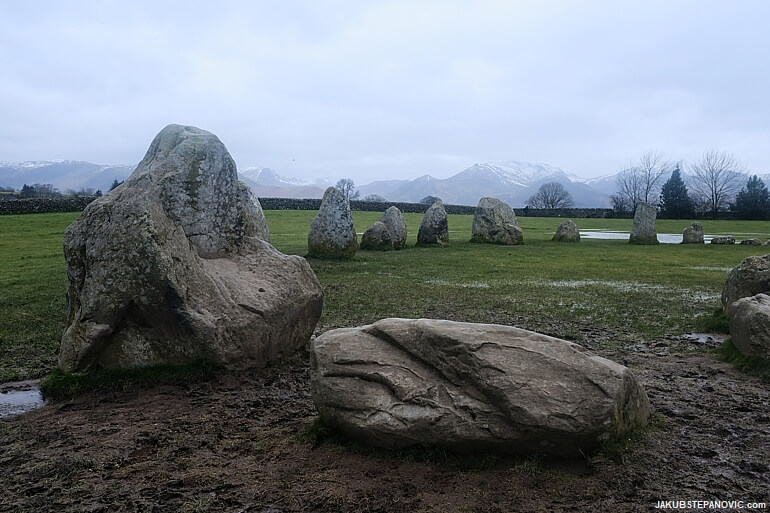 But, the cold was creeping in any moment that I stopped moving, so soon returned to Keswick, to take a hot shower, fix the broken wheel, and to catch up with the other club members about what they were up to.