First of all, welcome back!

Although leaves are falling and it marks the end of a long summer, it is the beginning of a new and interesting year at University. After my first week back, I took a trip to Blairgowrie to enjoy the colours of Autumn! I highly recommend it for everyone. Here is how it went.

Blairgowrie is one of the largest towns in Perthshire, sitting to the north of the city of Perth on the banks of the River Ericht. It is just a short bus journey from Dundee. It takes 50 minutes out of the city of Dundee and into the countryside, along country roads lined with trees. 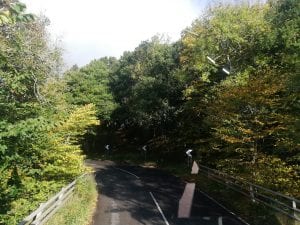 The bus drops you off in the town centre where the War memorial stands in the small park. There are several maps to be found throughout the town giving you ideas of where to visit. There are several coffee shops, bakeries and shops to nip into in the centre. 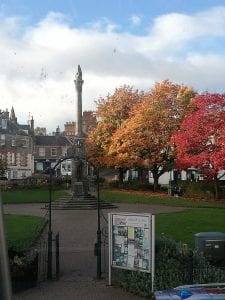 Next, I took to the river Ericht for a walk. They have several paths that show you different sights in the town. The path follows much of the river, which provides a beautiful view. As you follow the river, you will see abandoned mills. These mills provided huge employment at the time of the 19th century and pushed the town to expand hugely. By 1870 there were 12 mills along the river employing nearly 2,000 men and women and the population had increased from 400 in the 1700s to 4,000. The disused mill buildings can be seen from the riverside walk. 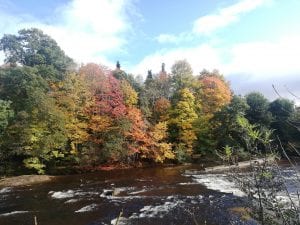 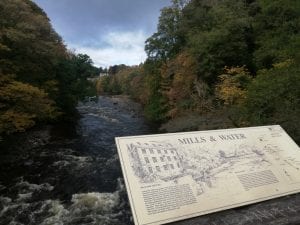 Along the walk, you will also be introduced to Cargill’s Leap. This is a narrow gorge up river with a viewing platform. Cargill’s Leap is named after the leader of the Covenanters, Donald Cargill (c.1627-81). While visiting his family in Rattray, Cargill is said to have escaped Government troops by jumping across the river at this point. 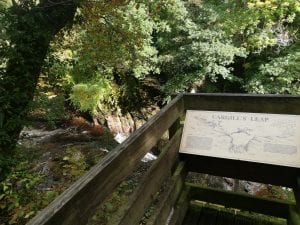 These walks are loops which will eventually bring you back to the town centre again. Another walk is the Knockie Walk. The Knockie Walk is a varied circular route that follows the start of the Cateran Trail and climbs Knockie Hill, which has beautiful views out over Blairgowrie to the Sidlaw Hills beyond. The path can start at the river and follows upstream. 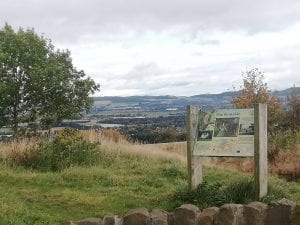 There is plenty more to see as you will find on the maps dotted around town. Including castles, golf courses, Ardblair Stone Circle, Darroch Wood, many lochs near by and much more.

If you need a small day trip out of the city of Dundee, Blairgowrie is a great choice!