Reaching the outdoors from Dundee can sometimes seem a little difficult without a car, especially with current circumstances not allowing for car-sharing or SU buses for club sessions. Not having a driving licence but being a keen adventurer, I have set out to find great day trip locations around Dundee that can be reached without large difficulties and within a student budget, with the target of making adventures more accessible to the average student. The outdoors is currently not too different from ‘normal’ times, adding a nice contrast to my daily routine of masked library hours and online lectures. 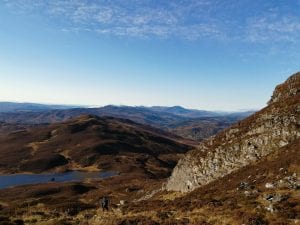 This weekend, my microadventure took me up to Pitlochry to hike Ben Vrackie and the smaller neighbouring Meall an Daimh, along with my flatmate. Getting there by public transport is simple, Stagecoach offers Tayside student day tickets for £6.20, allowing us to not worry about the exact time we would be arriving back in Pitlochry to return home. The first bus on Saturdays towards Perth leaves around 6:45 from Hawkhill at the edge of campus. In Perth we changed bus stops with a short walk, heading north on the bus to Aberfeldy, switching again in Ballinluig and arriving in Pitlochry around 9:40. 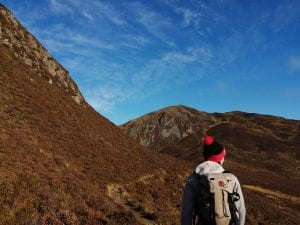 While Pitlochry itself is well worth a stop for lowland walks and to see the town, we headed uphill towards Moulin, where the car park for Ben Vrackie and the first signpost to the hill can be found. From there the walk is fairly easy to navigate, passing through woodlands and then over the grassy hillside with increasingly great views, until reaching the edge of Loch a Choire. Until here the walk is fairly easy and not overly steep with mostly dirt paths, after the loch it becomes steeper, rockier and the path is majorly 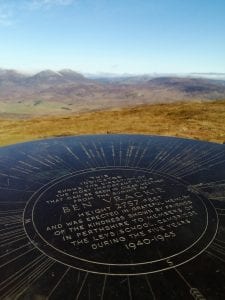 stone steps, although in great condition. There tend to be little tracks through the heather beside the steps for anyone who prefers not taking the steps and while this part of the hike is a bit more strenuous, there are plenty of benches and rocks along the way to stop off and the views on clear days are definitely worth the walk. At the top there are two other smaller cairns to your right, while the main summit has a plate pointing out all the hills you can see, with views ranging to Beinn a’Ghlo and across the Cairngorms, down the Tay and over across Rannoch Moor on good days. We happened to have picked one of the best possible days to hike, with the hills bathed in October sunshine.

To descend, the most popular and easiest route is to take the same route, with the possibility of a slightly longer loop if you turn right before the lake, circling around Meall na h-Aodainn Moire, before re-joining the main path. 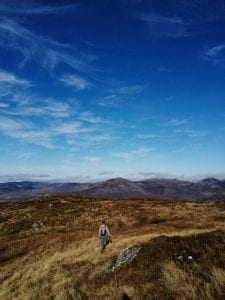 For a less popular and slightly more adventurous route, we chose to head northwest to Meall an Daimh, with parts of the route not having a path. The easiest way to do this would be to drop down to the southwest at the lowest point of ridge and then joining the track to either return to the main path or drop down to Killiekrankie. We opted to summit the second hill and then take a very steep heathery climb down to the track, which I do not necessarily recommend, but it is a possibility. Back on the path, we headed toward Killiekrankie, heading through the wonderfully fall-coloured forest along the banks of the rivers Garry and Tummel, through the lovely Faskally Forest and back into Pitlochry. 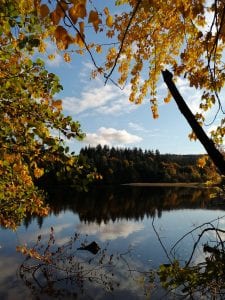 The route home is the same as in the morning, with buses leaving the centre of Pitlochry three minutes to the hour on Saturday afternoons. All the buses we took were fairly empty, seats that are to be used are marked and we had no trouble staying away from other people. We arrived back home around 7 pm, with our route being around 22 km long and taking us just over 5 hours to walk, although taking a shorter route option off the hill would shorten this time.

All in all, I would highly recommend the walk, for the great views, easy access by public transport or car, fairly easy hill walk, low skill of map reading necessary, the lovely fall colours and all the cute dogs we saw walking back along river.