Since arriving in Dundee about 3 years ago I’ve managed to go on quite a few hill walks and Ive bagged about 4 munroes. Now, at my last year in Scotland, Im hoping to get a few more in the bag before I leave. Last Saturday I managed to get two in one go: Ben Lawers and Beinn Ghlas.

We left Dundee at about 6am and with just a wee bit under 2 hours drive, arrived at Ben Lawers car park. The weather forecast wasn’t very optimistic and the immediate rain that met us still didnt take away any high hopes we had for the hike, still cosy and warm from the car ride. 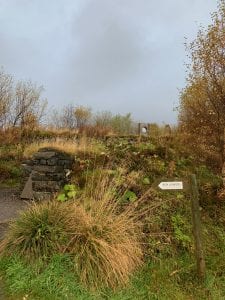 Shortly after we started on the nice and easy hill, the rain stopped. To fog was still hovering above us as a silent reminder of the weather forecast of rain, but we chatted excitedly along, hoping the fog and heavy clouds might still dissapear before we would make it to the top. 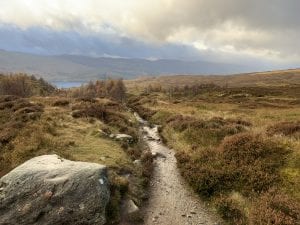 It didnt quite go as we hoped. After the first hour or so we had slowly emerged into the fog, only able to see a few meters ahead of us. The wind slowly got more ruthless the firther we got, the rain came and went but the path is easy to follow so we nontheless did not get lost. 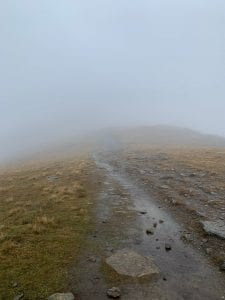 However as we walked further and higher, snow started falling between the ruthless wind and we slowly were coming to terms with the fact that we would not get much of a view for this day. 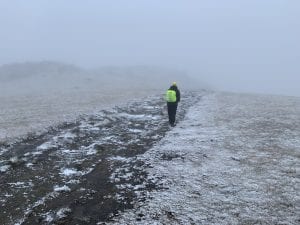 It was perhaps not the best day to go for this hike, the wind made the snow feel like needles going into the skin and the wind was very cold. We ended up doing the entire hike in 4 1/2h with no breaks between because of the horrendus weather. When we finally made it to the top. which felt like a long time since we thought that every munroe we could glimpse in front of us was the end (turned out there was 5 different munroes we thought was Ben Lawer) We quickly got a few, beautiful shots that did not due justice to the horrible weather. 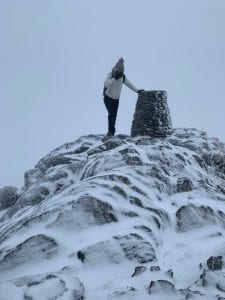 We quickly made our way, carefully downwards again, end despite being rather cold and wet it was a really good trip and I would definetly recommend to any beginner hikers who are keen to climb some munroes with clear, well defined paths!