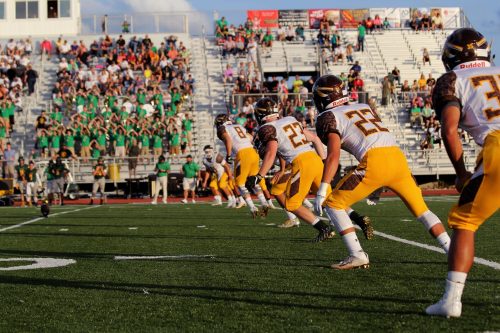 So, three years ago, we moved course pages into the CMS from their former home on our good old-fashioned artisan web server Sky. After that was completed, we began moving Studying Abroad from its three former homes into one.

This is the story of what went wrong, why it went wrong, and how we fixed all the went wrongness with the brand-new web pages that launched last week. It’s also a tale of how a service that’s always been an afterthought on web has become a forerunner for some of the things we want to do as part of the relaunch project.

In 2000 there was one page. By 2005, ERASMUS/Socrates and Transatlantic Student Exchange had split into two microsites. By 2014, a third site had appeared for some reason under international admissions. It was a mess. 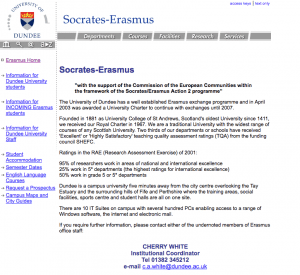 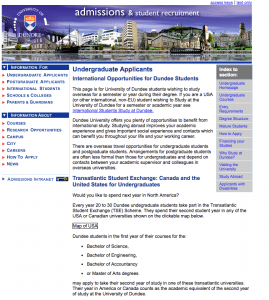 So, what went wrong, and why?

Determined not to make such mistakes again, I began planning the replacement long before we had any capacity to actually implement it.

The structure of the site needed to reflect the user journey for whichever user was on the site. Instead of splitting the site between Erasmus and non-Erasmus, the split was between Dundee students, and those wishing to come here.

For a Dundee student, it’s the course that’s key. We built a filter system similar to scholarships / room bookings searches. Our computing student therefore only sees the 29 partners relevant to them, rather than the full list of over 110.

They can also filter based on language, so if they’d prefer to be taught in English, it takes away the two Italian partners.

For an incoming student, we retained the country list, although we expect most to arrive directly on the partner page, either from Google or their own institution.

Our new partner pages are much more focussed on showcasing the University of Dundee, with student testimonials, photos of accommodation, and the ability to show modules for their subjects.

That’s great, but what about the maintenance?

To ease the maintenance burden, we reduced the number of pages from 267… to 266. So after this not exactly stellar reduction in content, how are we going to make sure our partner lists don’t go wrong again?

If you were paying attention, you may remember I mentioned that we had to update partner info in five places:

Even after the old Sky sites were removed, meaning we were down to three pages, it was still difficult. Pam or Karen updated SITS, then we’d then get an email request to fix the website. The requests are often complex (partners wishing to change their name to an Anglicised version, changes from partners with similar names, problems with accented characters), plus they’d come in thick and fast and it was easy to get mixed up. By the end of the old site, hundreds of emails later, we noticed we had several missing partners and others that should have been removed still live.

SITS is our current student management system. It deals with holding students records, from application to graduation. Our exchange partners exist within SITS as agents (on the AGN screen in SITS parlance), allowing us to admit them to Dundee.

So if this data already exists, why duplicate it? All the mistakes happened when trying to maintain the separate web version(s), so why not remove this step?

With a bit of help from UoDIT to let our servers read the SITS database, some pointers from Admissions and Registry, and a lot of work from our dev team, we realised we could run the partner pages entirely based on the information Admissions were already maintaining.

Admissions had to to a bit of work to tidy their data and needed to add two extra fields, but once this was done the site essentially built itself.

Our workload in web is now reduced to adding partners (now a ten second job, not a half hour chore) and your normal maintenance of photos and copy.

With a proper content audit, decent testing, and a redesign to the latest templates we finally had a site that worked for everyone. Dundee students can filter based on their course and get only the relevant partners for their course. The split for Erasmus / non-Erasmus no longer exists, with the partners showing the correct information on their information pages.

Study Abroad is far from unusual, there are many places on the website where there are several in-betweeny steps where problems can be introduced. Being able to take content straight from the horse’s mouth allows us to avoid many of these issues and is something we hope to do much more of as part of the web restart project. Of course this introduces new issues, particularly with regard to sticking to our Content Style Guide, but none of them are insurmountable, and the benefits vastly outweigh the costs.

Once described as 'unapproachable and rude to children', Pete nevertheless strives towards the goal of making the content of our website more friendly, readable, and useful for our visitors. Surprisingly handy with a drill.

In May 2022 Web Services successfully launched the new PhD web pages. This marks a huge milestone and is the culmination of work that we started two years ago when we…

Tackling policies and corporate information on the University website

Policies. You may not have noticed but we’ve got a lot of these on the website. Not just policies but other types of corporate information like procedures, regulations, disclaimers, reports,…

Last week we were proud to launch our new undergraduate course pages. This represents the culmination of several months’ work by Web Services and other teams including Marketing and Admissions…

It starts with atomic design We are using atomic design principles to organise our vast number of components and design patterns. These take the form of: Atoms – these are…

Recently, we received an email from one of our suppliers, Form Assembly. Form Assembly do web forms. You may not have known it but you might have seen their product…

Creating content based on the top tasks of our users makes a lot of sense. The basic principle is that you can create a great user experience for the majority…